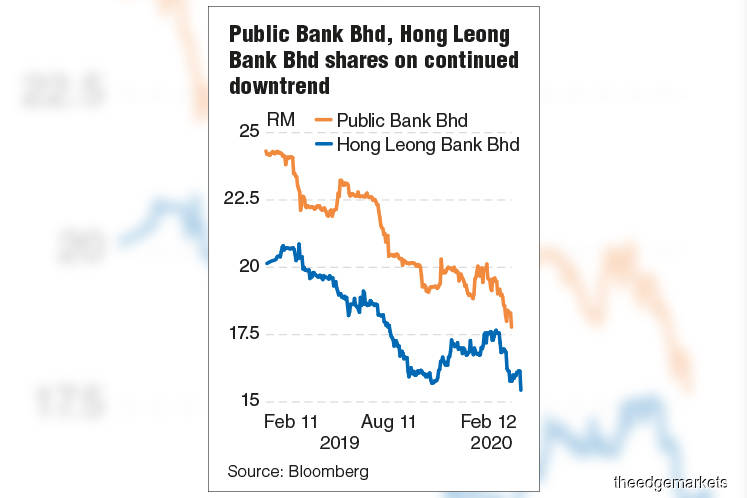 KUALA LUMPUR: Banking stocks, the proxy to economic growth, succumbed to heavy selling yesterday. Selling pressure emerged after the news that Malaysia’s domestic economy grew at barely 3.6% for the fourth quarter last year (4Q19), which in turn dragged down the annual growth to 4.3% — the slowest pace in 10 years.

Bank Negara Malaysia (BNM) governor Datuk Nor Shamsiah Mohd Yunus noted that there is “ample room” for a rate cut should the domestic economy warrant one. This raises the expectation of the central bank to have another rate cut this year which will cause banks’ net interest income margin to shrink further.

The slower-than-expected gross domestic product (GDP) growth gave reason for investors to dump banking shares knowing that banks’ earnings are relatively sensitive to the economic climate. Furthermore, this will also give rise to concerns over banks’ loan books quality.

The outbreak of Covid-19 added to the concerns of a further slowdown in the economy, although most economists commented that the impact of the outbreak remains unknown.

Malaysia’s largest bank by market capitalisation, Malayan Banking Bhd (Maybank), too, was not spared from the selldown. Maybank’s share price fell eight sen or 0.94% to RM8.46, valuing it at RM95.1 billion.

The selldown of banking stocks yesterday dragged the Bursa Malaysia Finance Index down by 297.4 points or 2% to 14,615.63, making it the worst-performing subindex on the local bourse, by both value and percentage terms.

Nor Shamsiah told a news conference yesterday the central bank has ample room to adjust the overnight policy rate (OPR) to accommodate challenges in the economy, after economic growth slowed to 3.6% for 4Q19.

According to Nor Shamsiah, concerns are that Malaysia’s economic growth will be affected by the Covid-19 outbreak moving forward, particularly for 1Q20.

“The overall impact of the virus on the Malaysian economy will depend on the duration and spread of the outbreak as well as policy responses by authorities,” said Nor Shamsiah.

Explaining that the selldown of banking stocks was triggered by the weaker-than-expected growth figures and continued concerns about the Covid-19 virus, an analyst told The Edge Financial Daily that it is not all doom and gloom going forward.

According to the analyst, who declined to be named, positive signs are showing as China’s government senior medical adviser has predicted for the outbreak to be over by April.

Coupled with the Malaysian government’s economic stimulus package to be introduced by next month, the economy has a chance of rebounding from its low.

“While [Malaysia’s growth for] 1Q20 is expected to be impacted, the economy is likely to rebound in April. Together with the expected stimulus package, I believe people will look more favourably at banking stocks during that time.

“At the moment, banks that are more exposed to tourism, wholesale and retail, as well as hospitality sectors will be the ones affected,” the analyst explained.

Amid optimism that the new outbreak would soon slow and an effective stimulus package, the analyst opined that the central bank is unlikely to rush into another 25-basis-point cut in the OPR.

“Unless the virus gets worse and the stimulus package does not work, I forecast just one rate cut this year.”

Meanwhile, another local analyst opined that while another OPR cut, if any, is not seen as a positive development for banks, the net impact on the overall sector is not necessarily significant.

“Generally, the rule of thumb is that if there’s a rate cut, it should not be positive for banks as it will hit their margins.

“However, at the end of the day, the banks will get to revise their deposit [rates] so the net impact will not be too significant. Assuming there are two rate cuts this year, earnings will be hit by 4-6% on average for the overall sector. The impact is negative, but not huge,” the analyst said when contacted.