BANKERS and banking consultants expect bank earnings and margins to be impacted following the revision of interchange fees for credit and debit cards effective Jan 2, 2015.

“The range of impact is wide as it depends on the card portfolio of the bank. Some banks could see as high as a RM100 million squeeze on margins while others may see just a couple of hundred thousand ringgit impact,” says a consultant to banks, adding that those affected may likely reduce some of their loyalty programmes to cushion the impact.

However, in a written reply to The Edge, Bank Negara believes the revision of interchange fees is unlikely to impact the earnings of banks, based on a cost study it conducted after accounting for the transaction-related costs.

“The remaining interchange fee funds received by an issuer are used mainly to fund cardholder loyalty programmes and incentives,” it states.

“Premised on the above, the revision of the interchange fees rates pursuant to the framework is not likely to impact the banks’ earnings. Instead, there is likely to be a dampening in the cardholder loyalty programmes and incentives provided by the issuers.”

Bank Negara explains that the cost of cardholder loyalty programmes and incentives funded through interchange fees is borne by merchants through higher merchant discount rates (MDRs).

“As MDRs increase due to interchange fee hikes, merchants would incur higher operational cost and would be pressured to recover such cost by raising the price of goods and services. Small merchants may also be pressured to surcharge their customers when accepting credit and debit cards to recover the higher MDRs,” says Bank Negara.

The interchange fee is a fee paid by card acquirers to card issuers to cover the costs incurred in facilitating the transaction, and includes cost of authorisation, clearing and settlement, security measures and funding. Interchange fees form a significant proportion of the MDRs paid by merchant to acquirer.

Bank Negara further adds that the framework is necessitated by the need to stem indiscriminate interchange fee increases by operators of payment card networks, which would cause the MDRs payable by merchants to rise on a system-wide basis.

“This would consequently contribute to inflationary pressure on retail prices to the detriment of the public as a whole, including those who do not use payment cards, as merchants offset the increase in MDRs by raising the prices of goods and services.”

It also says that the series of interchange fee hikes by the operators of two major international payment card networks — three hikes within a period of 14 months — is a source of regulatory concern.

“About 46,300 merchants had been impacted by higher MDRs. The situation is further compounded by the practice of some issuers who actively promote for their customers to switch to premium cards with higher interchange fees through the lowering of the eligibility requirement. If left unchecked, this would add further upward pressure on the MDRs and retail prices as the number of premium cards in the market increases,” Bank Negara says.

The central bank notes that the total interchange fees received by Malaysian issuers for domestic credit card transactions in 2013 was approximately RM735 million.

While there are mixed views on whether the revision of interchange fees will hit the earnings of banks, overseas examples point towards some impact.

According to the Economic Impact of Interchange Fee Regulation — France issued by Europe Economics on Sept 24, 2014, the issuing banks in Australia and Spain were affected when the respective countries lowered the interchange fees.

“Also, issuing banks’ share of revenue from cards (excluding interest income) fell from nearly 21% in 2005 to 18% after the intervention. As issuing banks saw their revenues fall due to lower income from interchange fees, they raised cardholder fees and reduced benefits in order to compensate for the lost income.

“Annual fees for credit cards increased by 50% by the end of the regulatory period, and those for debit cards rose by 56%. Issuing banks experienced an increase in revenues from cardholder fees (annual issuance and renewal fees) of €855 million, from around €1.1 billion in 2005 to around €2 billion in 2010,” it adds. It should be noted that the timing of the intervention, which capped interchange fees between 2006 and 2010, overlapped with the period in which the Spanish economy entered the global economic crisis.

The research, conducted by Europe Economics, was commissioned by MasterCard.

A manager from the credit card industry says the interchange fees that will be lowered are the fees earned by banks that issue the payment cards for every swipe made.

“It is a cost for merchants who accept the payment. Higher interchange fees would have an impact on merchants with thin margin businesses. So, in this case, the central bank is lowering the interchange fees in the hope that merchants will accept more card payments and point-of-sale (POS) systems will increase,” he says.

“Of course, this will have a direct impact on the banks’ earnings, but it also depends on whether the bank is a net card issuer or net card acquirer. The payment card system involves four parties: the merchant, cardholder, issuer (the party who issues payment cards to cardholders which is usually a bank) and acquirer (the party who sets up POS terminals and accepts card payments on behalf of a merchant which is also usually a bank).

When asked about this, Bank Negara says that out of the nine credit card issuers with about 80% market share in Malaysia, four have balanced issuing and acquiring business, three are net issuers while two are net acquirers.

“Although the total credit card transaction volume and value has increased by 15% and 25.5% respectively over the past three years from 295 million transactions amounting to RM79.8 billion in 2010 to 339 million transactions amounting to RM100.1 billion in 2013, there has been a slowdown in the growth rate of POS terminals since 2012, which indicates a potential saturation of POS terminals at merchants who can afford the current MDR level,” it notes. 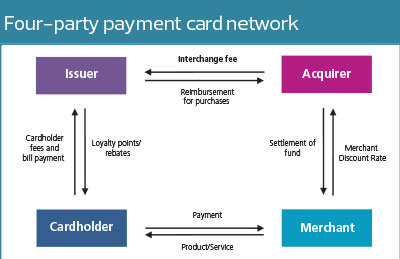