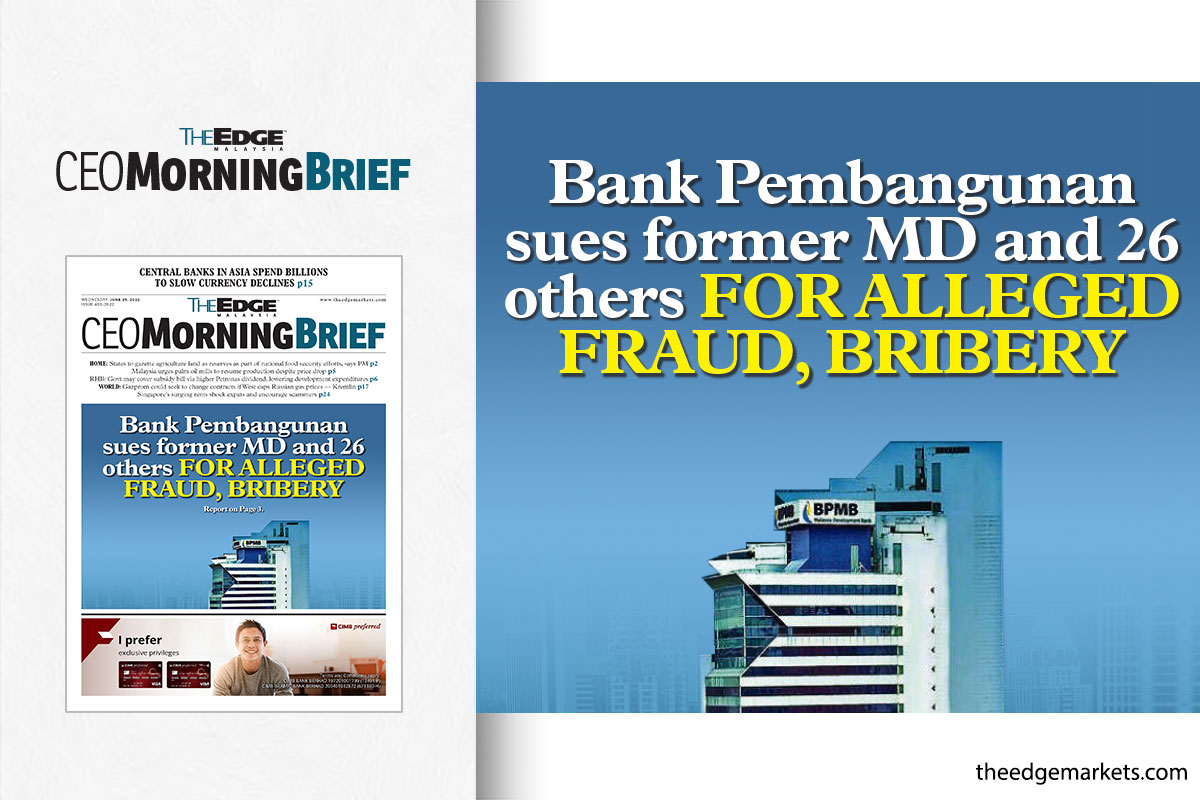 The RM400 million loan, which was approved in May 2012, was to partly finance a RM1.3 billion project undertaken by Aries to instal a fibre optic network around Peninsular Malaysia.

The development financial institution (DFI) is seeking a total of RM564.99 million in losses and damages as a result of the acts by the defendants, and is making a further claim of exemplary damages against the defendants, given what BPMB claimed were calculated acts on the part of the defendants to make a profit for themselves, which BPMB said "might well exceed any compensation payable". It also filed an ex-parte Mareva injunction -- an asset freezing order -- against all but a few of the defendants. Those excluded were foreign companies, including a few incorporated in the British Virgin Islands.

The injunction application will be heard on July 1 before High Court Justice Ong Chee Kwan.

In the court filing sighted by The Edge, BPMB accused the defendants of conspiring and using unlawful means to defraud the DFI, and of concealing such fraud and its proceeds from BPMB.

According to the DFI, the loan was disbursed to Aries without fulfilling necessary conditions.

BPMB also alleged that the money, which was meant to be used for the fibre optic project, was misused. The whopping sum was “syphoned and/or unjustifiably transferred” to other entities, it claimed, including Paneagle Holdings Bhd, BVS Trinity Sdn Bhd, VCB Malaysia Bhd, Orient Telecoms Sdn Bhd, and/or Primawin Ltd – all of whom have been named as defendants in the suit.

The loan approval was granted based on, among others, the appointment of Huawei Technologies Co Ltd, China (Huawei China) as turnkey contractor to build, operate and maintain the network for the project. However, Huawei China was subsequently replaced by Paneagle Holdings without the full knowledge, consent and/or approval of BPMB.

Although Huawei was removed from the project, the RM400 million loan was still disbursed via two tranches of RM200 million each to Aries (then known as V Telecoms Bhd), according to the court filing, as Zafer allegedly approved two separate waivers of certain conditions for the granting of the loan. The waivers were made a few days before the first and second disbursements in July 2012 and November 2013, respectively.

BPMB said it discovered that Aries' former group MD and director Datuk Wira Ranjeet Singh Sidhu (13th defendant) had, on behalf of Aries, made an RM8 million payment to Zafer through intermediary Datuk Noorusa'adah Othman (Adah) (14th defendant) on July 4, 2012 for the successful disbursement of the RM400 million loan to the company.

Adah was the former senior corporate finance personnel to Tan Sri Syed Yusof Syed Nasir, who was formerly the chairman and director of Aries, the court filing stated.

About two years later, in July 2014, Aries requested for more time to repay the loan to enable the company to get listed on the London Stock Exchange Alternative Investment Market.

BPMB granted the request in exchange for a full repayment should the listing be successful. Aries, however, failed in its listing bid.

Probing further into Aries and associates

In July 2018, the DFI issued a notice of default over the loan to Aries, demanding the full repayment of RM451.27 million.

A year later, in May 2019, a summary judgement was entered against Aries for the sum demanded, although the company appealed and obtained a stay of execution from the Court of Appeal, subject to BPMB's right to appoint a receiver and manager (R&M) under the relevant debenture.

The DFI then appointed Lim Keng Peo of Deloitte Corporate Solutions Sdn Bhd as the R&M over the assets and undertakings of Aries.

Lim's investigations into Aries revealed that the defendants, in their various capacities, had allegedly been involved in:
• the misrepresentation in Aries' financial statements,
• the waiver of the conditions precedent prior to the disbursements of the loan,
• the manipulation of the appointment process and appointment of Silver Ridge Sdn Bhd (a wholly owned unit of public-listed Silver Ridge Holdings Bhd) as the Independent Checking Engineer (ICE) of the project,
• the questionable verification process by Silver Ridge Sdn Bhd as the ICE of the project,
• the syphoning of funds from Aries to other parties,
• the novation and transfer of assets from Aries to Orient Telecoms, and
• unjustified payments from Aries to other parties.

The DFI also claimed one Shailen Popatlal (second defendant) was involved in the alleged misconduct and wrongdoing in relation to the loan granted, among others. BPMB claimed that Shailen was Aries' shadow director and was in control of and/or has owned and/or substantially owned Primawin Ltd (19th defendant), China Finance Ltd (20th defendant) and Arab Emirates Capital Ltd (now known as Hadron Equities Ltd, the 21st defendant), all of which were incorporated in BVI.