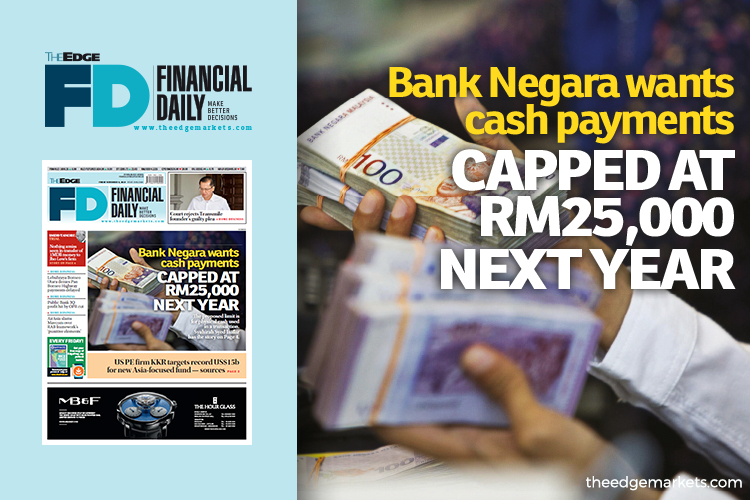 KUALA LUMPUR: Bank Negara Malaysia (BNM) is proposing to set a cash transaction limit (CTL) of RM25,000 next year, as part of its initiative to continue curbing financial crimes. A CTL is the cap on the physical cash amount that can be paid per transaction.

If the proposal is implemented, cash transactions above the limit proposed cannot be paid by cash and must be paid electronically, for example by credit card, or by cheque. Any intention to circumvent this limit is an offence for both the payer and payee, according to the central bank.

Speaking at a media briefing here yesterday on the proposed measure, BNM deputy governor Datuk Abdul Rasheed Ghaffour said the initiative is not new or unique to Malaysia as it has been implemented in many other countries.

“The need for CTL arises given that the untraceable and anonymous nature of cash transactions make it an ideal vehicle to facilitate illicit activities.

“Cash remains widely exposed to abuse by illegal activities. As such, this measure targets large cash transactions that are at higher risk of being abused. This is also not to hinder legitimate cash payments for goods and services — most of which are for small-ticket items,” he said.

The CTL will cover all types of cash payment transactions, including the payment for goods and services, and donations or payment between individuals for personal purposes.

Transactions made with the approval of the ministry of finance for “exigent circumstances”, such as humanitatian and disaster relief, will also be exempted.

“The CTL is the latest in a series of measures to further strengthen the anti-money laundering/counterterrorism financing framework in Malaysia.

“It complements existing integrity measures, such as the suspicious transaction report and the cash threshold report (CTR), to better provide authorities with the requisite tools in further strengthening financial integrity in Malaysia,” Abdul Rasheed said.

The amount set for the limit is also in line with the current CTR threshold of RM25,000, which was reduced from RM50,000 in January this year.

The CTR requires any transactions above that threshold to be reported to the central bank.

On Tuesday, BNM governor Datuk Nor Shamsiah Mohd Yunus told reporters that the central bank had received over five million CTRs on transactions involving about RM483 billion as of September this year. While the total value of cash transactions reported had increased marginally, the number of CTRs received had nearly doubled, she said.

A public consultation paper on the proposed CTL will be available on BNM’s website from Nov 11 until Dec 31, 2019 for the general public to submit any feedback, before the proposed policy is implemented. The central bank targets for it to be in effect next year.

“We are giving the public the opportunity to provide their feedback and to raise any concerns they have, whether it be over the limit set or if there will be any practical challenges. Ultimately, it’s a shared responsibility for all to make sure the new CTL is adhered to in order to truly combat any unwarranted activities,” Abdul Rasheed added.

The CTL is an initiative proposed by the National Coordination Committee to Counter Money Laundering, to which BNM is the secretariat.