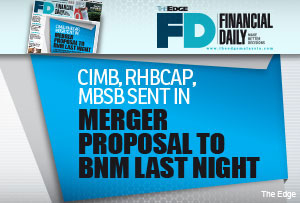 This means that no other party can swoop in to make a rival bid now.

“The deal is on. All three parties [have] jointly submitted to the central bank their business plans, integration plans, salient terms of the sale and purchase agreement — although there could still be some small changes to be made later as well as the due dilligence list,” a source familiar with the merger plans told The Edge Financial Daily.

The boards of all three financial institutions met separately yesterday and after a lengthy discussion decided to go ahead with the submissions to BNM. They are expected to make an announcement to Bursa Malaysia today on the submission of their merger plans to the central bank, sources said. Trading in the shares of the three companies is suspended today, pending “a material announcement”.

Industry sources said the success of a deal now boils down to Bursa’s decision on whether or not the Employees Provident Fund (EPF) — the common major shareholder of all three parties — can vote in the proposed mega merger. Bursa officials are due to meet today to make a decision on the matter.

“Bursa’s decision still matters. If the EPF can vote, it improves the chances of a deal going through. If not, RHBCap has to bring the deal to shareholders to see if they can get enough votes to see it through,” a source said.

The EPF is keen on voting in any eventual deal to protect its investments. However, certain Bursa listing rules prevent it from doing so as it is a substantial shareholder of all three parties. The EPF is the single largest shareholder of RHBCap and MBSB with 41.5% and 64.6% stakes, respectively, and holds a 14.6% stake in CIMB. Both RHBCap and MBSB had previously, at the EPF’s behest, written to Bursa to put forward the EPF’s request for a waiver from the listing rules.

The proposed merger scheme submitted was for RHBCap to buy CIMB’s entire banking business through a share swap deal. Under that scenario, the EPF’s vote is crucial because as the buyer of the assets and liabilities of another banking group, RHBCap only needs a 50% plus one share approval for the deal compared to the selling party that would need a 75% vote.

If the EPF is not allowed to vote, RHBCap’s other substantial shareholder — Aabar Investments PJS — will hold the trump card. Aabar, with its 21.2% stake,  will have a 36.2% vote for or against the acquisition of CIMB’s business if the EPF can’t vote.

Aside from the Middle Eastern investor, OSK Holdings Bhd has a 9.9% stake in RHBCap and would have important voting rights as well.

It is widely known that Aabar could be a stumbling block to any merger as it is seeking a high price of RM12 per share for its stake in RHBCap. RHBCap shares, however, have not breached the RM10 level in over five years.

Meanwhile, the second step of the merger would involve the respective Islamic banking subsidiaries of CIMB and RHBCap to be merged with MBSB, and CIMB Islamic Bank Bhd would be the vehicle for the enlarged Islamic operations.

“The valuation for the deal is more or less firmed up. The CIMB-RHBCap deal is a pure share swap, while the MBSB deal is a combination of cash and shares,” a source said.

The 90-day exclusivity period was to have expired at midnight yesterday. On July 10, when the parties first began the merger talks, they said they would be allowed an automatic extension of the exclusivity period upon submissions being made to Bank Negara within the 90-day period.

“There’ll be an automatic extension of the exclusivity agreement up to the point they sign the legal agreement,” a source said.

This article first appeared in The Edge Financial Daily, on October 9, 2014.