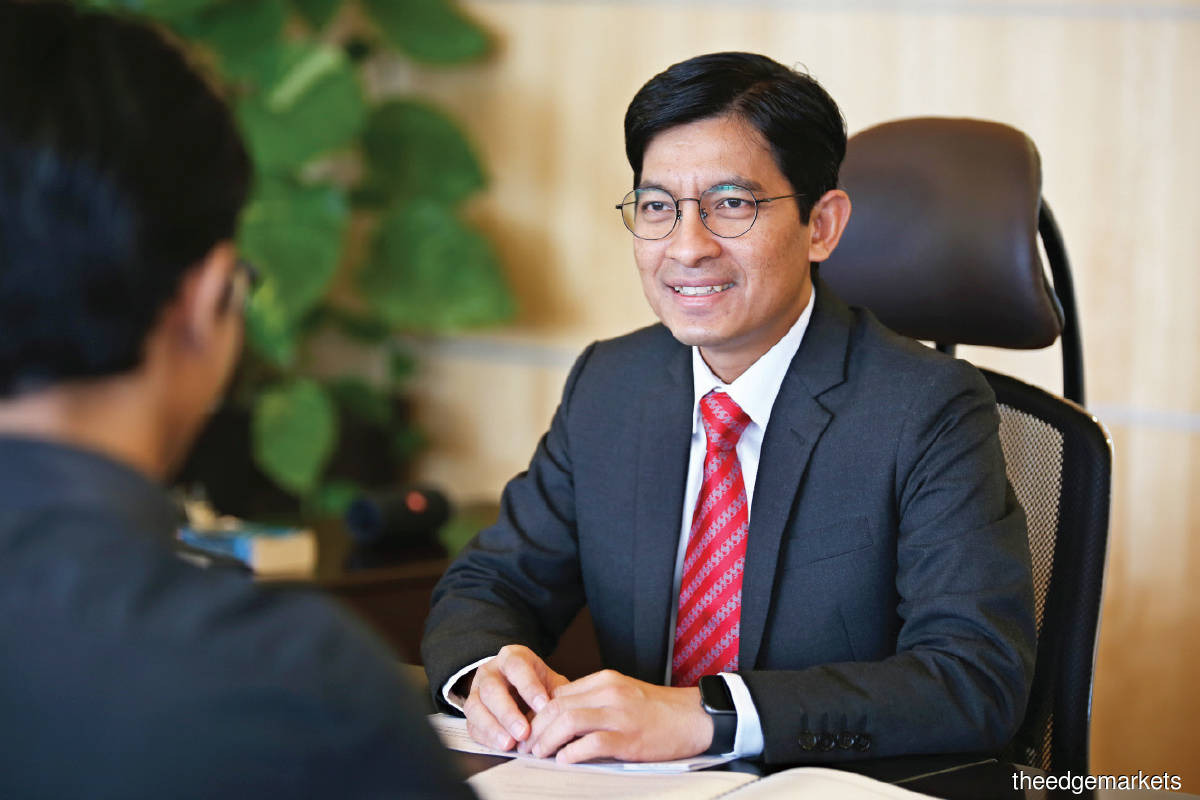 Muazzam: The digital bank is under extended testing currently. What I can say is that this is not an advanced digital channel of Bank Islam. It will be a new digital proposition altogether.

BANK Islam Malaysia Bhd, having recently become the country’s first public-listed pure Islamic bank, is now embarking on its next stage of growth that will be centred around environmental, social and governance (ESG) aspects.

On Oct 8, the lender took over the Main Market listing status of its former parent company BIMB Holdings Bhd, a move that had been in the works for years.

In an interview with The Edge, Bank Islam CEO Mohd Muazzam Mohamed shares that the group has kicked off a five-year roadmap (2021 to 2025) that is ultimately aimed at it becoming a prominent offeror of shariah-ESG total financing solutions by end-2025. It also aims to have leadership in digital banking and social finance.

Muazzam reveals that the group hopes to launch a digital bank, possibly sometime next year, for the underserved segment. Setting up the digital bank falls within the ambit of its existing licence.

“The digital bank is under extended testing currently. What I can say is that this is not an advanced digital channel of Bank Islam. It will be a new digital proposition altogether,” he says, declining to divulge further details.

“There is obviously a lot we want to achieve under the roadmap, but if I can summarise, there are four key things we are focusing on. One is the aspect of digitalisation, and this is something that we will continue to invest in, in terms of our internal processes as well as our channels,” he says.

Two, will be sustainability and ESG. “We will embed ESG, incorporating climate risk, in our credit assessment process and hope to put in place a broad-based framework by the end of 2022,” he says.

Key sectors where the bank will carry out ESG due diligence include large-scale agriculture, oil and gas, forestry, large-scale manufacturing projects, residential and industrial developments, mining, and quarrying. Muazzam clarifies that the final definition of high sustainability risk sectors will only be ascertained once the ESG framework is developed.

In practical terms, Bank Islam’s focus on ESG will see it expanding the number of its Shariah-ESG funds to about 12 to 15 by 2025 from eight now, and doubling its green financing to about RM4 billion from roughly RM2.2 billion now.

Three, is a focus on the halal industry, and four, on financial inclusion. “We want to be the go-to bank for this industry. We’ve been in collaboration with Halal Development Corp to be the bank that provides all the financial solutions for players on their halal integrated platform.”

As for financial inclusion, he says the bank’s focus will be enabling micro businesses to achieve upward mobility.

Meanwhile, among the bank’s key financial targets that Muazzam was able to disclose was to improve cost-to-income ratio to under 45% by 2025 from about 52% currently, and to continue growing annual financing at double the industry’s pace.

No plan to go regional

The stock has gained about 5% since the listing, closing at RM3.16 last Friday, giving it a market capitalisation of RM6.56 billion. With total assets of RM74.64 billion as at end 2020, Bank Islam is the country’s fourth largest Islamic lender.

“I’ve been getting calls and doing interview sessions with overseas funds lately that are mainly looking at ESG counters, so it’s good to have that kind of visibility now,” Muazzam remarks.

The bank’s listing marked the completion of BIMB’s restructuring exercise, which comprised a private placement, a scheme of arrangement to settle outstanding warrants, and an internal reorganisation of subsidiaries.

According to Muazzam, there is currently no plan for Bank Islam to venture out in the region. However, if its upcoming digital bank at home proves successful, the group may eventually consider expanding abroad via a digital bank.

For now, however, it is only BIMB Investment Management, which has a partnership with UK-based Arabesque Asset Management Holding Ltd, that is looking outside, with plans to market its products overseas.

Muazzam says the financial impact from helping out troubled borrowers in the B50 segment via the recently-announced Financial Management and Resilience Programme (URUS) will be much more manageable than if the help was offered on a blanket basis to the entire segment.

“I can’t give details at this point in time, but the number of individuals that we predict [will take it up] and also the amount involved will obviously be a lot less than if help was offered on a broad-based basis,” he says.

He goes on to say that it makes better sense to offer targeted help to those who have either lost their jobs or more than 50% of their income, as many of the bank’s customers who currently fall under the B50 definition have not actually lost their jobs or experienced a salary cut.

Bank Islam as an entity reported a lower net profit of RM564.95 million in FY2020 compared with RM627.61 million a year earlier, as the Covid-19 impact took a toll.

Interestingly, Bank Islam has one of the highest ratios of floating-rate loans in the industry, at about 92%, which worked to its disadvantage when the Overnight Policy Rate (OPR) was cut by 125 basis points last year.

“Should there be an event of OPR increase next year, we foresee that the bank can benefit from the positive impact to its profitability,” says Muazzam. “No doubt that fixed rate financing is able to mitigate the impact of any further OPR cuts, but on the other hand, it would give higher impact of modification loss arising from financing moratorium. We have seen recently how some other banks with higher composition of fixed rate financing had to take a bigger hit on modification loss due to the moratorium.”

Bank Islam’s view is that any change in the OPR will only happen next year. It expects Bank Negara Malaysia to increase the OPR by 50bps in the second half if there is a wider reopening of the economy.

Bloomberg data shows that eight research houses have a “buy” call while one has a “hold”, with target prices ranging from RM3.20 to RM4.04.

“The one positive about BIMB’s recently completed restructuring exercise is that Bank Islam can now be evaluated on its own as a standalone entity. This does not diminish the fact that it continues to have a bancassurance agreement with its sister company, Syarikat Takaful Malaysia Keluarga Bhd, that will provide it with a steady source of fee income,” said Maybank Investment Bank Research, which has a “buy” on the stock with a target price of RM3.80.

With strong asset quality, high provision levels and a comfortable capital position, Bank Islam provides exposure to “the only listed Islamic bank at the moment at decent valuations”, the research house said in an Oct 14 report.

“One of very few banks to generate return on equity above 10%, Bank Islam currently trades at a prospective FY2022E price-to-book value (PBV) of just 0.9 times, which does not commensurate with its ROEs, in our view. We have conservatively assumed a lower dividend payout ratio of 45% (versus 50% previously) and the prospective FY21 dividend yield of 4.8% is attractive,” it said. Its target price pegs the stock to a prospective FY22 PBV of 1.1 times (ROE: 10.3%).