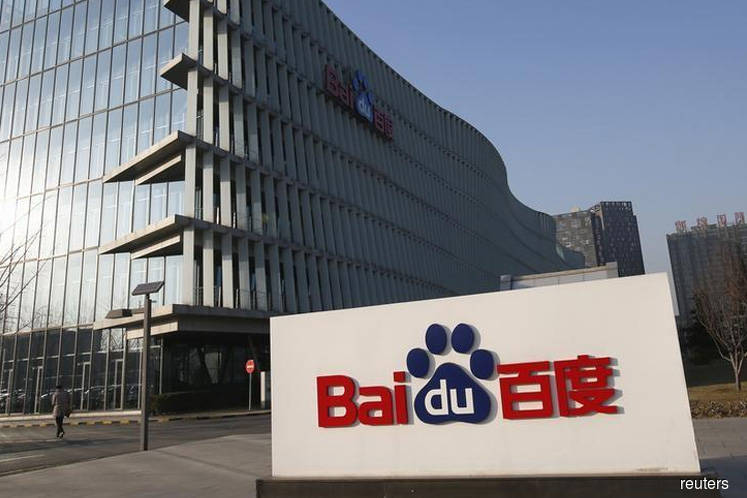 (Feb 28): Baidu Inc, China's biggest search engine company, said first-quarter revenue could fall as much as 13% from a year earlier as the coronavirus epidemic puts the brakes on economic activity and advertising.

It expects revenue between 21 billion yuan and 22.9 billion yuan (US$3 billion to US$3.3 billion), falling short of an average estimate of 23.1 billion yuan, according to Refinitiv.

The higher end of the forecast range represents a decline of 5% from a year earlier.

"The rebound of the economy after the outbreak will continue to be a long-term project," Baidu CEO Robin Li said in an internal letter obtained by Reuters. Its contents were later confirmed by the company.

The potential fall for first-quarter core revenue — sales made from advertising — was even steeper, with Baidu forecasting a slide of 10% to 18%.

"Baidu will also struggle more than other internet companies in China due to its greater reliance on the advertising market," said Haris Anwar, an analyst at financial markets platform Investing.com.

Baidu noted that the extension of Lunar New Year holidays as well as quarantine measures to curb the outbreak and the resulting the closure of shops had meant its offline advertising business was particularly hard hit.

Baidu executives stressed, however, that they believed a gradual pick up in business was underway and that advertising demand would rebound as the epidemic ends.

"At Baidu, our employees are gradually returning to the office, applying strict safety measures. We assume businesses across China will do the same, and that our marketing services will pick up at a faster pace into quarter end," Chief Financial Officer Herman Yu told an earnings call.

Sales from iQIYI — a Netflix-like video service which competes with Alibaba-backed Youku and Tencent Holdings' Tencent Video — jumped 7% to 7.5 billion yuan. iQIYI had 106.9 million subscribers as of Dec 31.

Shares in Baidu were little changed in extended trading.