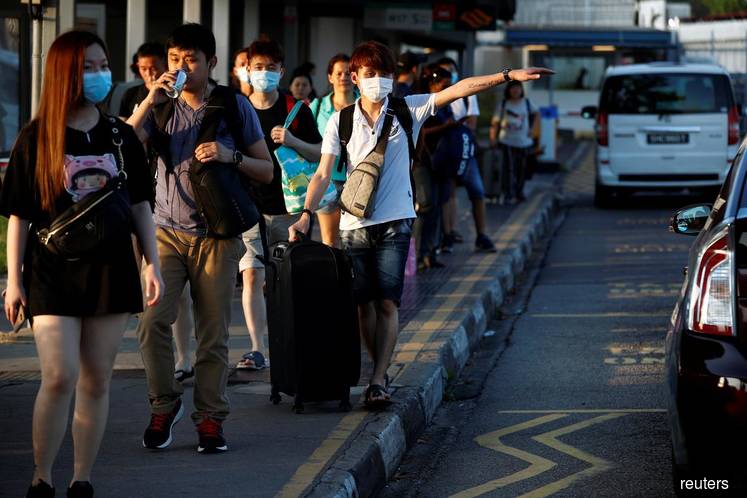 SINGAPORE (March 17) : Thousands of Malaysian commuters, many with suitcases stuffed with clothes, crossed into neighbouring Singapore on Tuesday evening, prepared for at least two weeks away from home, hours before their country starts to seal its borders.

With the highest number of coronavirus infections in Southeast Asia, Malaysia is banning citizens from travelling overseas and visitors from entering the country from midnight until March 31 to help stop the spread of the disease.

But many of the 300,000 Malaysians who commute daily to Singapore were caught off guard by Monday night's announcement, which could have left them without a salary for the duration of the ban.

Lau Tong Lin, 21, is back in the city-state after going home to pack following a night shift at a Singapore supermarket. Lau said he plans to bunk with a cousin in Singapore.

"If I didn't come then I might have had to take no-pay leave," he said, adding he was afraid of losing his job.

Singapore, with a population of 5.7 million, relies heavily on Malaysians living in the southern state of Johor to staff businesses ranging from restaurants to semiconductor manufacturing.

The Singapore government has said it will assist companies that need to accommodate workers, including by finding them hotels and dormitories at a lower cost.

The labour ministry will fund S$50 (US$35.02) per night for 14 nights for each worker that a company needs to accommodate.

After a traffic jam at the border, 27-year-old Nur Juliana got off her bus and decided to walk for an hour with two of her friends into Singapore.

She said that while her company, which manufactures medical products, is putting her up at a hotel, her parents were worried about the condition of her accommodation.

Despite the travel ban, Singapore Prime Minister Lee Hsien Loong said his Malaysian counterpart Muhyiddin Yassin had reassured him that the flow of food and other goods would go on as normal.

Malaysia and Singapore, which separated in 1965 after a brief union following independence from Britain, have close economic ties. The two countries, separated by a strait, have two land checkpoints.

As the deadline loomed, technician Lenin Prabaagaran was rushing home to pack his bags so he could make it out before the border closed. "I have no choice, or I have to go on no-pay leave," he added.