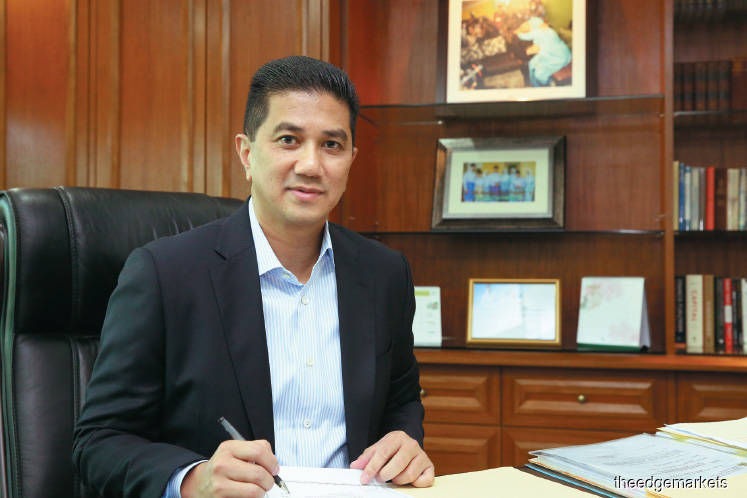 Azmin wants Dr Mahathir to complete his term despite the fact that Pakatan had decided on Anwar becoming the prime minister and that he will join Gerakan the moment Zuraidah is sacked.

Rather it is the current political scenario amid talk of the political landscape being realigned possibly involving certain factions in PKR and Gerakan.

Hence it is all about a show of strength between “us” and “them” and of sending signals and messages to “them”.

Mohamed Azmin and Zuraidah are showing their president, Datuk Seri Anwar Ibrahim and PKR just how strong they are and that the people who attended the dinner are “bravely and openly” with them.

And although Mohamed Azmin’s speech (yes a speech at a CNY dinner) was on the need to spur the nation’s economy, this, he emphasised must be done by “stopping politicking and supporting the prime minister to continue leading the country”.

The underlying message is consistent with the stance of Team Azmin as far as the transition issue is concerned — for Tun Dr Mahathir Mohamad to complete his term despite the fact that Pakatan Harapan (Pakatan) had decided on Anwar becoming the prime minister before the next general election, with Dr Mahathir preferring the date to be after the Apec summit at the end of the year.

Gerakan president Datuk Dominic Lau, who led his team (in party attire) to the Azmin–Zuraidah do, told me his party’s presence was to reciprocate Mohamed Azmin’s gesture earlier at Gerakan’s CNY open house.

“They came to our open house so we come to theirs,” he said.

Mohamed Azmin apart, the Gerakan CNY event was also attended by Dr Mahathir and people have not stopped talking about it, despite all efforts to downplay this.

Coming out of last Sunday’s CNY dinner, many are talking of Mohamed Azmin’s next possible move.

Word has it that he would lead his faction in PKR out of the party and join Gerakan the moment Zuraidah is sacked.

Zuraidah is facing disciplinary charges over remarks she made against PKR leaders and her hearing will be held on Feb 25.

Interestingly, the delayed hearing of Zuraidah’s case (and the subsequent verdict — whether as Mohamed Azmin expects it to be or otherwise) would delay Team Azmin’s exit from PKR, hence spoiling his plans.

Nevertheless, the PKR disciplinary board has rejected Zuraidah’s request and the hearing will be held as scheduled.

Many in the political fraternity believed Mohamed Azmin had tried to provoke Anwar to sack him to justify his follow-up actions.

The big question now is will Mohamed Azmin lead his people into Gerakan en bloc? If this happens with 15 members of Parliament said to be on his side, not to mention state assemblymen, they along with Gerakan will declare the party Pakatan-friendly, pretty much like Sabah’s Warisan. And they would expect to have their cabinet and executive council posts in Pakatan retained.

It is not beyond Mohamed Azmin’s team to hope for Gerakan to be a Pakatan member much to the chagrin of Anwar’s side of PKR and DAP. That would lead to all sorts of other possibilities. But for now will Gerakan accept the “pendatangs” so to speak?

Lau says his party welcomes all who subscribe to the Gerakan ideology.

The party positions itself as a Bangsa Malaysia, non-communal and non-ethnic outfit. He did not want to go beyond saying that when I asked if Gerakan will accept Team Azmin from PKR.

Gerakan is Team Azmin’s preferred choice because of its multiracial membership which make it possible for it to accommodate Mohamed Azmin’s non-Malay supporters. Nevertheless, a former leader who quit Gerakan last year described the party as “a Chinese outfit with several Indians”.

Lau did not want to comment if there have been talks between him and Mohamed Azmin on the so-called political migration.

But assuming Mohamed Azmin is accepted, many of his supporters would expect him to be president as he comes from a big party which is part of the government while Gerakan is in the political wilderness.

That is as clear as it gets.

Back to the big question. Will Mohamed Azmin do it?

“I don’t think he will do it,” says a political observer but “keeping the Gerakan option alive is part of his political strategy for him and the cartel”.

Another observer puts it this way: “Anything is possible but this is a clear betrayal of the people’s trust which put Pakatan into power in the 14th general election. That is why Pakatan must end all uncertainties.”