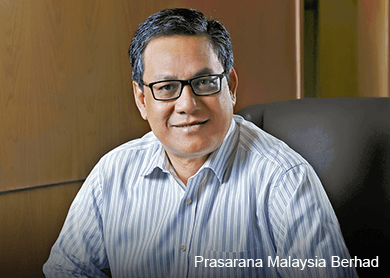 KUALA LUMPUR (Dec 22): Azmi Abdul Aziz, former head of Rapid Rail Sdn Bhd – which operates the light rail transit (LRT) and monorail systems in the Klang Valley under the RapidKL brand – is returning to Prasarana Malaysia Bhd to take its helm as the group managing director from Jan 1, replacing Datuk Seri Shahril Mokhtar who has been appointed as the new CEO of Mass Rapid Transit Corp Sdn Bhd.

In a statement today, Prasarana group chairman Tan Sri Ismail Adam said one of Azmi’s immediate tasks would be to roll out the implementation of the new LRT3 project that would further enhance the connectivity and mobility between residents in Klang, Shah Alam, and Bandar Utama.

“With his vast knowledge on policies, as well as operations of public transport systems and services, Azmi has a host of good things to bring to the management table. We anticipate the group will grow stronger under his able leadership,” Ismail said.

“We are looking at a very exciting year ahead. There’re lots of things happening next year, especially in enhancing travelling experience of our customers by providing more comfort and higher efficiency,” he added.

Topping the list would be the full implementation of the new four-car train for the RapidKL Monorail Line, the launch of the environmental-friendly Bus Rapid Transit-Sunway Line services in June; the opening of Phase 1 of the LRT Line Extension Project for Ampang Line in October, arrival of the new trains for LRT Ampang Line, the introduction of RapidKL’s first double decker buses as well as preparatory works for the operations of the MRT Sungai Buloh-Kajang Line, in which RapidKL has been appointed as the operator.

“PRIME has recently won a significant contract as the shadow operator for Makkah Metro and is expected to kick-off their assignments in Saudi Arabia.

"PRIDE, on the other hand, would be looking at growing and executing its transit oriented development projects, and its retail and commercial activities,” Ismail said.

With more than 25 years of experience in both the public and private sectors in the public transport industry, Azmi’s current duties at SPAD are to manage the
development of policy and planning in transforming the nation's land public transport landscape.

His current key tasks also includes overseeing and supervising the rolling out of Malaysia’s first MRT project. He is also responsible for the implementation of the Land Public Transport Master Plan and the study for the proposed high speed rail from Kuala Lumpur to Singapore.

Prior to his appointment with SPAD, Azmi served as the chief operating officer of Scomi Engineering Bhd. He also served as the project director for India’s first monorail project in Mumbai during his stint in Scomi.