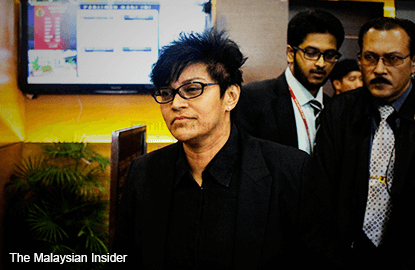 KUALA LUMPUR (Dec 31): A tech blogger has accused Minister in the Prime Minister’s Department Datuk Seri Azalina Othman Said of lying when she told Parliament that Putrajaya did not purchase spyware from Italian IT firm, Hacking Team.

Rozario said the receipts were evidence that Purtrajaya was involved in buying the spyware through Miliserv, a 100% Bumiputera firm registered with the Ministry of Finance Malaysia (MoF).

He said that Hacking Team’s company policy also stated that it only sold products to governments and government agencies instead of individuals or private businesses.

However, on its website, Miliserv does not state that it is a government agency but an organisation founded in 2005 to provide advanced digital technology products and solutions to various organisations in information technology, digital forensics, telecommunication, public security and intelligent gathering.

“If the government hasn’t procured spyware from Hacking Team, I strongly advise the minister (Azalina) to investigate this Malaysian company for making huge payments to an enemy of the Internet,” Rozario said on his blog.

In November, Azalina said “no such purchase” was made, despite an Internet leak by hacker Phineas Fisher in July detailing that Malaysia was among several countries, including the United States, Russia, United Arab Emirates, Singapore and Thailand, which were clients of Hacking Team.

She was replying to Tian Chua (PKR-Batu) in the Dewan Rakyat.

The information was released when Hacking Team itself becoming the victim of a hack in July, resulting in the leak of 415GM of its data, including information on its client list which was posted on Twitter.

The Prime Minister’s Office was named as client, according to a posting by Twitter user @OlivierFalcoz on the microblogging site. The Malaysian Anti-Corruption Commission (MACC) was also listed as a former client.

Rozario said he had the receipts in June, closer to the time the Hacking Team leak was released but chose not to expose them then.

He changed his mind after Azalina’s denial in Parliament.

“Next time, ask your PR guys to call me before you go setting your pants on fire,” he said on his blog.

He added that although the government might have had a legitimate reason to purchase the spyware, the manner in which it was being used raised questions.

“Is it used with a warrant? Is it used for catching criminals, or criminalising politicians (and their lawyers)?”

On Dec 1, Prime Minister Datuk Seri Najib Razak reportedly told the Dewan Rakyat that Putrajaya did not have any information related to the acquisition of a remote control system to spy on the people.