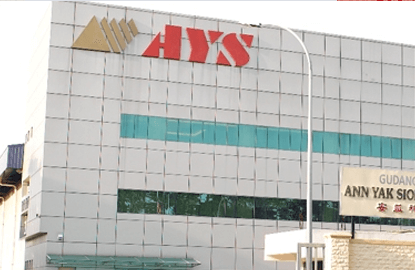 KUALA LUMPUR (July 14): AYS Ventures Bhd, which engages in trading and marketing of steel products and construction materials, is hopeful of a better financial year amid a challenging global economic outlook.

The group said ongoing developments such as the Pengerang Integrated Petroleum Complex in Johor and the railway infrastructure projects in the Klang Valley such as the mass rapid transit (MRT) and light rail transit (LRT) projects are expected to spur demand for building materials.

“As you know, the MRT Line 2 contract has recently been awarded. With these infrastructure projects, we believe the demand will be better. We have been in the market for over 30 years, and we have a strong network," Oh told a press conference after the group’s annual general meeting (AGM) today.

“For whichever mega projects in Malaysia, AYS is usually one of the companies involved in the supply chain. We always view these projects positively,” he added.

Besides projects in Malaysia, the group is also expecting to benefit from overseas projects, ahead of mega events such as the Japan Olympics 2020, Expo 2020 in Dubai and the 2022 World Cup in Doha.

“We are working very closely with local fabricators, so if any of them secures projects overseas, we would be able to work with them to supply materials for the projects,” Oh said.

He pointed out that AYS is a working partner of WCT Holdings Bhd for the latter’s construction of a Formula One race track in the Middle East.

Meanwhile, the group is expecting the overall economic outlook to improve next year, as the weakened ringgit and steel prices are seen to be bottoming out.

“Last year, the sentiment was not very good due to the weakening of the ringgit, while steel prices were consistently on a downtrend. This year, the prices have reached their bottom.

“It was forecast that it should be relatively more stable this year, compared with the previous year,” said Oh.

AYS is eyeing to capitalise on the weakened ringgit against the greenback by expanding its export market. The group currently exports to Asia, with Singapore being its biggest market, as well as the Middle East and Europe.

Currently, exports make up about 10% to 15% of AYS’ distribution division revenue, while the balance is accounted for by local sales. It aims to increase contribution from exports to between 20% and 25% in the future.

Going forward, Oh said the group is always looking for opportunities to acquire synergistic businesses to expand its operations.

He added that the group already has expansion plans in place, but declined to reveal what they are except that they will be announced “soon”.

Earlier at the AGM, AYS saw all of its resolutions passed including the approval for a first and final dividend of 1 sen per share for FY15, payable on Aug 10, 2015.