Axis REIT’s occupancy rate to improve in second half 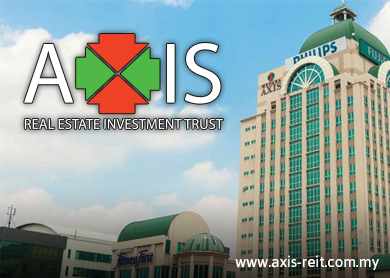 Recall that on March 3, Axis REIT announced two proposals: (i) to split each of its existing units into two; and (ii) to do a private placement of new shares of up to 20% of its share base. We believe the split will be completed first followed by the 20% placement for easier administration. Note that these two corporate exercises are not interdependent on each other. We gather that the plans for these corporate exercises have been submitted to the authorities and Axis REIT is currently awaiting their approval.

We understand that Axis Business Campus (ABC) is still vacant although the refurbishment has been completed. However, management is optimistic of securing new tenants for ABC by the third quarter of financial year 2015 (3QFY15). This is in line with our expectations that ABC will be tenanted by the second half (2H) of FY15.

Axis REIT has already tenanted two of a total of five floors of the building. We gather that Axis REIT is actively in discussions with potential tenants and we expect the building to reach more than 80% occupancy rate by end-FY15.

Our earnings forecasts for both FY15 and FY16 are unchanged as the updates from management were in line with our expectations. We expect overall occupancy rate to improve to 95.7% (1QFY15: 92.5%) by year-end, assuming an occupancy rate of 100% and 80% for ABC and Axis Business Park. We believe the share price upside is limited for Axis REIT as we expect its FY15 net dividend to decline 5.1% year-on-year to 16.9 sen. We expect no special dividend in FY15 compared with FY14’s 2.36 sen from the disposal of Axis Plaza. However, the downside is supported by a decent FY15 dividend yield of 4.8% and better outlook for the occupancy rate in 2HFY15. — MIDF Research, June 17 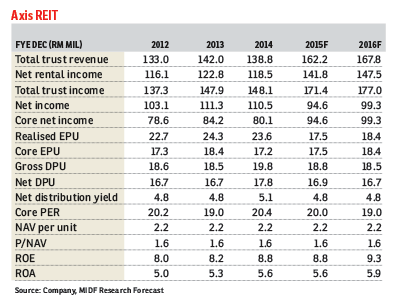