Axiata looking to move into Vietnam

By acquiring a stake, a long-term cooperative relationship can be established through which Axiata can offer valuable technology transfer. Furthermore, Axiata believes that it is in a good position to help and guide this corporate exercise based on its experience.

The Information and Communications Ministry expects to complete the final proposal of this deal and obtain government approval by this year.

Other international telcos, including Norway’s Telenor Group and Sweden’s Comviq International, are also eyeing this opportunity to penetrate Vietnam.

MobiFone’s current parent, state-owned Vietnam Posts and Telecommunications Group, will be entitled to hold up to 20% of the private entity.

If the deal materialises at the right price, this is a great opportunity for Axiata to further strengthen its regional leadership.

According to the Business Monitor 2013 report, mobile adoption in Vietnam is expected to be saturated at 141% in 2014 mainly dominated by prepaid voice and short message service (SMS). Data usage is still in its infancy with penetration rates for 3G, Internet and broadband users for 2014 forecast at only 31.8%, 36.1% and 5.4%, respectively.

Data average revenue per user (Arpu) is expected to grow at a five-year compound annual growth rate  of 21.2%.

As at the third quarter of 2012, MobiFone was the third-largest celco in Vietnam with 16.7% subscriber market share, behind sister company Viettel (41.8%) and VinaPhone (29.9%).

Positives are: (i) mobile Internet growth; (ii) margin improvements through collaborations or sharing; (iii) recouping prepaid tax via the goods and services tax and (iv) unlocking value through tower listing. 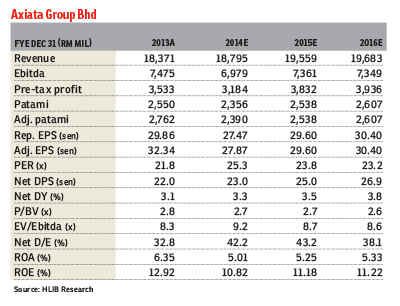