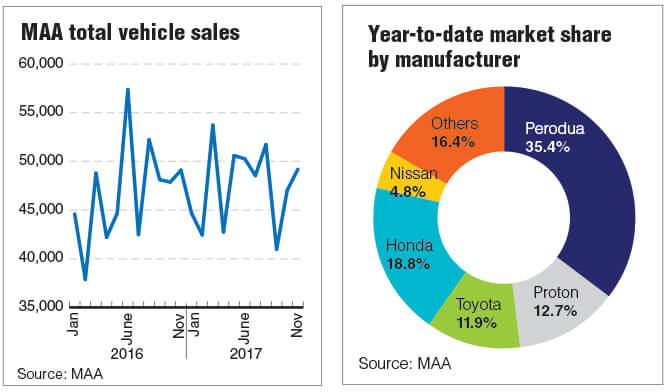 KUALA LUMPUR: Analysts are optimistic about the prospects of the Malaysian automotive industry next year, with sales expected to trend higher than the total industry volume (TIV) that will be netted this year, as they see consumer spending improving amid more exciting new model launches.

“This year has been a lot about driving inventories down, which triggered massive rebates in the market. We see some stability in the system for 2018, if there is follow through in demand strength from the improved macroeconomic backdrop,” Hafriz wrote in an email exchange with the daily.

Among the reasons for the fall were stringent hire purchase loan approvals, slower economic growth, lower consumer spending, and more cautious business sentiment, according to the Malaysian Automotive Association (MAA).

“We expect a more modest growth of 3% in FY18, as there are no major catalysts to help lift volume as weak consumer sentiments and tight lending conditions continue to be dampeners,” said its analyst Siti Ruzanna Faruk in the research firm’s strategy report released last Wednesday.

Analysts are also betting on the sports utility vehicle (SUV) segment to drive up sales for 2018, due to, among others, its increasing popularity among consumers opting to upgrade from a vehicle with a smaller seating capacity.

In particular, one SUV model has been billed as a potential game changer next year — the Geely Boyue — Proton Holdings Bhd’s (Proton) first new model following the entrance of China’s Zhejiang Geely Holding Group (Geely) into the group. Its rival Perusahaan Otomobil Kedua Sdn Bhd (Perodua) has also hinted on the possible introduction of a brand new SUV.

As for the non-national vehicle sector, UMW Toyota Motor Sdn Bhd will begin selling the Toyota CH-R next year.

Still, consumer sentiments remain the main headwind, so car companies will need to step up their efforts to meet not just their own, but the industry’s key performance indicators (KPIs) as well.

According to the Malaysian Institute of Economic Research, the Consumer Sentiment Index dipped 3.6 percentage points (ppts) quarter-on-quarter to 77.1 points in the third quarter of 2017 (3Q17).

“OEMs may consider offering their own financing schemes and higher trade-in values for traded-in cars,” Wong suggested. Another analyst, who declined to be named, said car makers should consider introducing more affordable variants.

“It is always a huge challenge to come up with creative and cost-effective marketing campaigns which appeal to both new and repeat customers. Hence, several companies are willing to offer longer warranty packages and higher discounts to defend their market shares,” MAA president Datuk Aishah Ahmad shared in a recent email.

In its note to clients yesterday, HLIB selected Pecca Group Bhd and DRB-Hicom Bhd as its top picks, with a “buy” recommendation on both stocks.

HLIB’s Wong said the recent agreement with Geely will benefit Proton’s position positively in the longer term with “restructuring and synergies being implemented and new model introductions in the second half of 2018 (2H18)”.

Among the catalysts the research house cited are the projected 20% y-o-y growth in Mazda vehicle sales in FY18, the strengthening of the ringgit against the yen — Bermaz’s imports are fully exposed to the yen — and the unlocking of value from the anticipated listing of the company’s 60.4%-owned Bermaz Auto Philippines Inc.