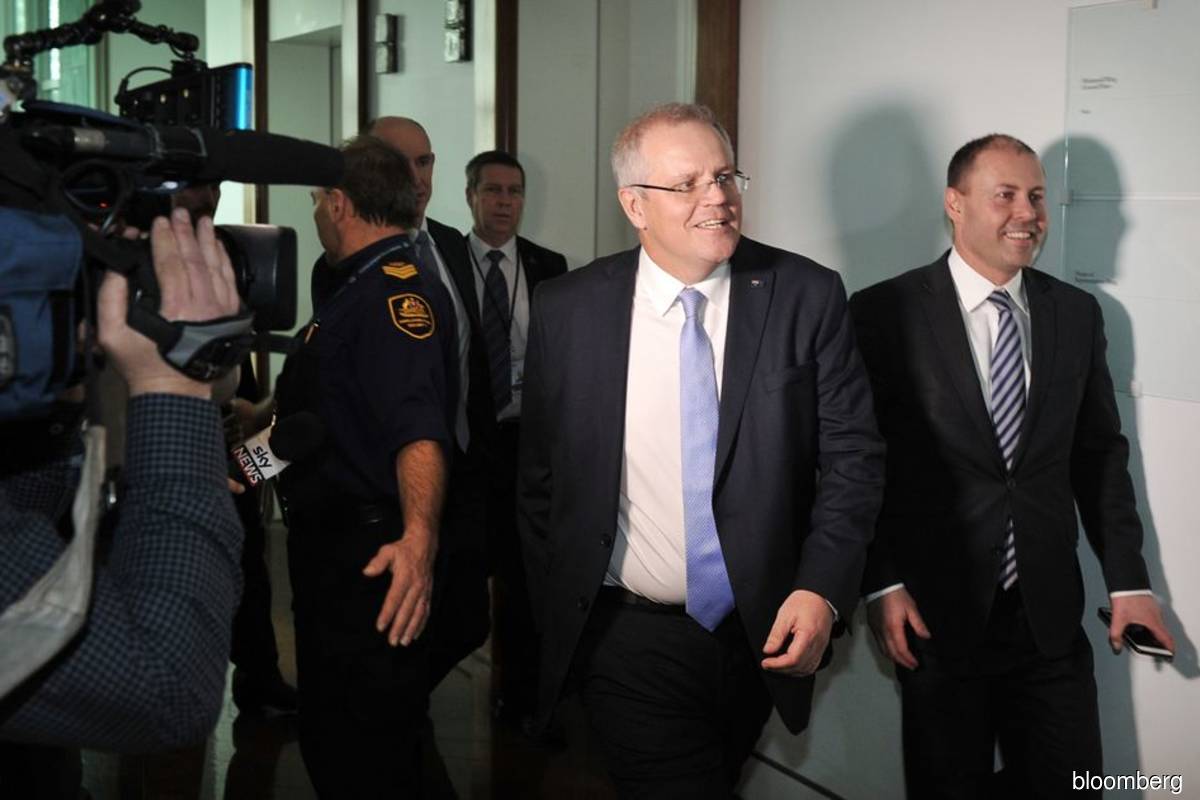 'In hindsight, these arrangements were unnecessary,' Morrison (second from right) admitted in a statement.

SYDNEY (Aug 16): Australia's Prime Minister Anthony Albanese said his predecessor Scott Morrison had "undermined our democracy" by secretly appointing himself as the minister for home affairs and treasury during the Covid-19 pandemic, in addition to the health, finance and resources portfolios previously revealed.

Morrison, who stepped down as the leader of the Liberal Party after losing a general election in May, has come under fire from senior members of his own party and its coalition partner, the National Party, who were unaware of the arrangements.

After a review of the matter by the Prime Minister's Department, Albanese told reporters that Morrison took on the health and finance portfolios in March 2020, home affairs and treasury in May 2021, and resources in April 2021.

"Its completely extraordinary that these appointments were kept secret by the Morrison government from the Australian people," he said.

Albanese will receive legal advice on the issue from the solicitor general on Monday (Aug 22), and said he was critical of the Morrison government for allowing a centralisation of power by the then prime minister.

Karen Andrews, the former home affairs minister in Morrison's government, said she had no knowledge that Morrison also held the role, and called for Morrison to resign from Parliament.

"You can't govern in a veil of secrecy," Andrews, a Liberal Party lawmaker, told ABC radio after Albanese's press conference.

Former treasurer Josh Frydenberg, who left politics after losing his seat in the May election, was also unaware that Morrison held responsibility for treasury, The Australian newspaper reported.

Liberal Opposition Leader Peter Dutton said legal advice from the solicitor general was needed before any decisions on the next steps were made.

In a lengthy statement, Morrison, who remains a Liberal backbencher, said he regretted that his actions had caused concern, but he had "acted in good faith in a crisis".

Morrison defended taking on extra ministerial roles without his Cabinet's knowledge during the Covid-19 pandemic, saying it was "an unprecedented time", and that the powers served as a safeguard.

"I used such powers on one occasion only. I did not seek to interfere with the ministers in the conduct of their portfolios," he said in the statement.

He added that "in hindsight, these arrangements were unnecessary".

Morrison said in a radio interview earlier on Tuesday he didn't make the arrangements public because they were a safeguard only, and it was an "oversight" the ministers weren't informed that their roles were duplicated.

"We had to take some extraordinary measures to put safeguards in place," he told radio station 2GB, likening it to having two keys on a nuclear submarine.

The resources minister role he took on in 2021 was different, he said, because he had used the power to stop approval for a gas exploration project off the coast of Australia, which was opposed by local communities. The decision is being challenged in court.

"I believe I made the right decision in the national interest. This was the only matter I involved myself directly with in this or any other department," he said in the statement.

Albanese said it was concerning that two people had responsibility for the resources portfolio, and had different positions on matters.

Not tabling in Parliament who was responsible for ministerial portfolios was "a very clear breach of the obligations that the [then] prime minister had to Parliament", he told ABC radio earlier on Tuesday.