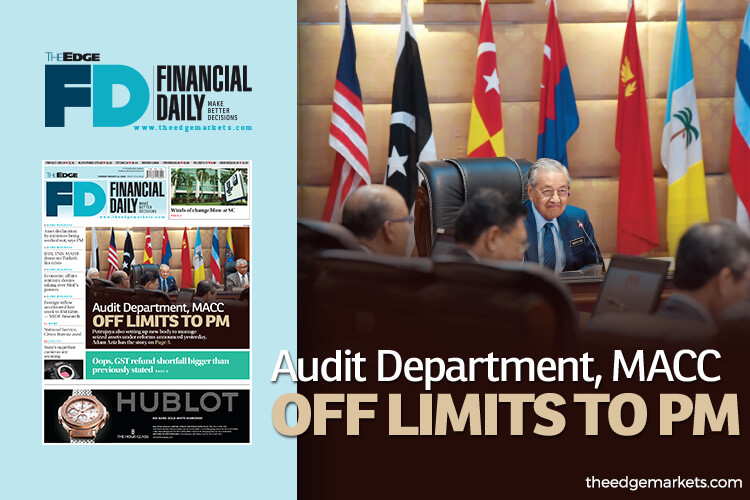 KUALA LUMPUR: The government has announced steps to empower Parliament and limit the power of the prime minister (PM) over two key agencies crucial in fighting corruption, namely the National Audit Department (NAD) and the Malaysian Anti-Corruption Commission (MACC).

Prime Minister Tun Dr Mahathir Mohamad said the plan is to set up bipartisan parliamentary select committees to ensure the autonomy of the agencies.

He said the most important action for the government to take in combating corruption is to remove from the PM’s position what he described as “overall authority” over the two key agencies.

“This means that the prime minister and the government will not have the power to [appoint,] dismiss or demote the positions [in these bodies],” he said. “Furthermore, even the budget allocation for these bodies will be determined not by the government but by the select committee.”

Speaking to the press after the third meeting of the Cabinet Select Committee on Anti-Corruption (JKKMAR) yesterday, Dr Mahathir did not specify any timeline for the plan, saying only that it will be done as soon as possible.

Currently, the NAD and MACC are parked under the Prime Minister’s Department, which means the PM has the prerogative to appoint the agencies’ chiefs.

The changes are part of a greater reform under the purview of JKKMAR, which is tasked to streamline anti-corruption measures involving the government and related entities.

“We need time to see the outcome from [taking] these actions. We hope these steps will help reduce corruption,” said Dr Mahathir.

For the MACC, a press statement by JKKMAR underlined that the competency of its chief commissioner will also be assessed by “external stakeholders”. The statement, however, did not provide details.

In the statement, JKKMAR also proposed that the NAD, which will be given full autonomy through the audit select committee under Parliament, be named as the Office of the Auditor-General of Malaysia.

However, Dr Mahathir pointed to potential hiccups if the government plans to implement changes promised by the Pakatan Harapan goverment in its electoral manifesto that would require the Federal Constitution to be amended.

“This will require some time to study the wordings of the law … not all these reforms will be done immediately.

“One that is impossible for us to do is things that would require amendments of the constitution because we do not have two-thirds (majority in) Parliament,” he said

“If we have the declaration from the opposition parties that they will support [our proposals], only then will we introduce the amendments that [require] Parliament’s approval,” he added.

This includes the promise to set up a two-term limit for a prime minister.

As such, Dr Mahathir said he will seek the support of opposition MPs in these matters. “Immediately after this, I will talk to the opposition,” he said.

Meanwhile, a plan to set up a central body to manage assets confiscated at the national level, dubbed “Central Asset Management Corp” is also in the works.

JKKMAR, in its statement, said it will establish laws which will underline the authority of the unit which will have authority over seized assets at the national level.

Dr Mahathir confirmed at the press conference that the jet will be “brought in as soon as we can [bring it to] flight” from Singapore, whose government has confiscated the jet — a Bombardier Global 5000 — since January last year.

“It’s been lying on the ground for a long time, and planes which do not fly often need to be serviced and checked. So we will have the checks done, when it can fly we will bring it here,” he said.

Low used funds traceable to the US$700 million (RM2.86 billion) that was transferred from 1MDB to Good Star Ltd’s account to acquire the jet for US$35.37 million, according to court documents filed with the Kuala Lumpur High Court on Aug 6 sighted by The Edge Financial Daily.

Wynton Aviation (Global 5000) Ltd, a company that was incorporated in the British Virgin Islands on Dec 30, 2009 on Dec 2009, bought the private jet from JT Aviation Corp. The purchase was done one day after Wynton was incorporated, if not the same day. Low was the owner and controlling party of Wynton, according to the court document.

The jet purchase happened less than three months after the US$700 million wire transfer was executed from 1MDB to Good Star in October 2009.

When the US$700 million was transferred into Good Star’s bank account from 1MDB, Deutshce Bank’s officer in Malaysia was told that Good Star was a wholly-owned subsidiary of PetroSaudi International — a joint-venture partner of 1MDB to exploit energy concession in Turkmenistan and Argentina.

However, the court document cited the banking records show that Good Star was a company controlled by Low and he was the beneficial owner of Good Star’s account and the sole signatory. It was not a unit of PetroSaudi International.

The transfer of the jet would mark the second big-ticket item, allegedly owned by Low, to be seized by the Malaysian authorities in recent months through the assistance of neighbouring nations.

Last week, the US$250 million superyacht Equanimity — also said to belong to Low — docked at Malaysian shores after it was passed by authorities in Indonesia.

Low, as well as the direct owner of the yacht, Equanimity (Cayman) Ltd have both questioned the legality of the seizure by Malaysian authorities, while troubled state fund 1MDB has also claimed ownership of the yacht.