Audi unveiled a prototype of a two-door luxury coupe as the world’s No 2 premium-car brand seeks to shake up its design language.

The Prologue concept car is flatter and shorter than the A8 sedan and is equipped with 22-inch wheels, three inches (7.62cm) bigger than those on Audi’s top-of-the-line model. The front grille is wider and positioned lower than in Audi’s current vehicles.

“It’s a signature car for Audi,” Ulrich Hackenberg, head of development at the German manufacturer, said in a statement for the car’s presentation at the Los Angeles Auto Show.

Audi has been stepping up efforts to counter critics who say it’s losing its technological edge and has settled for a stale look as the Volkswagen AG unit seeks to surpass BMW in sales. VW chief executive officer Martin Winterkorn appointed Hackenberg to head Audi development last year. Marc Lichte then took over as design chief in February.

The Prologue’s 605-horsepower engine accelerates the car to 100kph per hour in 3.7 seconds. That sports car-like performance comes alongside gadgetry such as a touch screen that stretches across the dashboard, allowing both the driver and front-seat passenger to operate sound and navigation systems. The headlights feature the manufacturer’s latest laser technology. 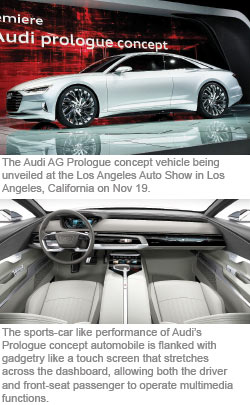 “We have put the sportiest car in the luxury segment on wheels,” Lichte said in the statement.

Audi is a cornerstone of Volkswagen’s strategy to take the global auto industry’s top sales spot from Japanese carmaker Toyota Motor Corp by 2018. The Ingolstadt-based unit plans to invest €22 billion (RM92.40 billion) by 2018 to expand, including introducing 17 new or revamped models this year.

Audi sees the luxury portion of the United States market growing to almost 13% of total sales over the next decade, Scott Keogh, Audi’s head of US sales, told reporters at the show. Luxury models now make up about 10% of vehicle sales, he said. Luxury-brand sales will continue to outpace the total market because of affordable lending rates and leasing terms, an older fleet of vehicles on the road and the growth of families earning more than US$100,000 a year.

“The affluent are getting more affluent,” Keogh said. — Bloomberg