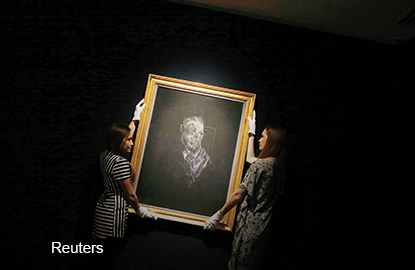 WITH an Atlantic tailwind from May auctions in New York in which the two biggest auction houses sold more than US$2 billion (RM7.56 billion) of art, eyes are focused on major sales beginning this week in London that may see prices soar again to dizzying heights.

The big winner in New York was Picasso’s Les femmes d’Alger (Version ‘O’) which set the record at US$179.4 million at Christie’s for the most expensive artwork ever sold.

In three days of sales Christie’s also became the first auction house to sell more than US$1 billion worth of art. Adding in Sotheby’s sales, the total topped US$2 billion.

“We’ve entered into a phase which I really think is a masterpiece market,” Christie’s Katharine Arnold, who is running the post-war and contemporary art evening sale on June 30, said. Featuring paintings by Francis Bacon, Yves Klein and Gerhard Richter, the 76 lots are estimated to fetch US$132 million  to US$187 million.

Not to be outdone, Sotheby’s is heralding its Wednesday’s evening sale as “London’s highest valued auction of contemporary art”.

Combined with both houses offering effectively truckloads of paintings by Chagall, Picasso, Manet, Monet, Gauguin and even a rare Klimt at modern and impressionist art auctions kicking off at Christie’s on June 23, there is every chance total sales could top US$1 billion, experts say.

Arnold said the skyrocketing prices for fine art being fetched at auction were bringing more such works to market.

“There are art works in private collections which are just starting to move, some objects that have been within families for 60-plus years,” she said.

Among those are works by the Anglo-Irish painter Bacon, one of whose diptychs featuring his lover George Dyer and his muse Isabelle Rawsthorne, from 1967, is estimated at £8 million (RM47.6 million) to £12 million at Christie’s.

All told, Bacon could account for something like 15% or more of the value of all the paintings to be sold over the next two weeks, indicating how his stock has soared.

“Bacon is an artist whose market has transformed radically even over the last 10 years,” Sotheby’s senior specialist in contemporary art, Oliver Barker, said. “I think he’s now become one of the absolute icons of the latter part of the 20th century.”

While the auction houses tend to see nothing but blue skies and higher prices, other art market observers suggest external factors, such as a Greek debt default, or a decision by central banks to hike interest rates that would make bonds a more attractive investment, could alter the playing field.

“There’ve been low interest rates especially in the United States and that creates asset bubbles,” ArtReview magazine’s associate editor, Jonathan TD Neil, said. “I don’t think this is a bubble yet. And if your money can’t earn a return you might as well have some good art to put on the wall — if you can afford it.” — Reuters