An auction dedicated to the passions of Jean Patou There will be more in the spotlight at this auction than Jean Patou’s work in couture and perfume. His passion for literature, and writing in general, as well as for the furniture of Süe et Mare, with whom he enjoyed a privileged relationship, will also feature prominently.

The auction will obviously highlight Jean Patou’s couture and ready-to-wear creations, especially those from the Golden Twenties. In all, about 50 models will be presented, with an emphasis on evening gowns, creations inspired by the designer’s travels and sportswear.

Among the pieces expected to garner the most attention will be the “Black and White” evening gown, the Oriental inspired “Nuit de Chine” dress in satin and silk tulle embroidered with rose coloured glass pearls and metallic strings, and an entire golfing outfit that was worn by the designer’s sister, Madeleine Barbas Patou.

A taste for perfume

Jean Patou also had a veritable passion for perfume and successfully diversified into that domain. It’s not surprising then to find the house’s signature olfactory creations up for auction.

Aficionados will be able to bid on perfume bars made of red sandalwood, containing several bottles, but also on legendary perfumes like Joy, the house’s signature fragrance, Colony, in its pineapple-shaped bottle, and Normandie, an homage to the ocean liner of the same name.

A book lover, especially of literature and the history of textiles, Jean Patou amassed an impressive library over the course of his life. The auction will feature many of these writings, including letters exchanged by La Fayette and his brother-in-law, the Viscount of Noailles, and letters between Gustave Flaubert and Marcel Proust.

Süe et Mare furniture will also be offered. The two interior designers were responsible for decorating the Jean Patou fashion house in 1922 as well as his private residence in 1923. Pieces from both of these two iconic locations will be up for auction. — AFP 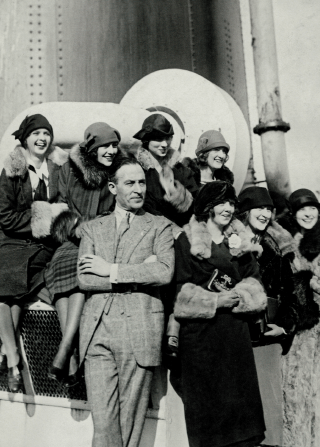 This article first appeared in The Edge Financial Daily, on April 28, 2015.