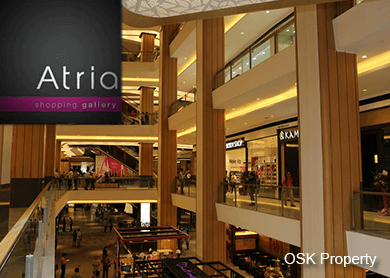 (June 3): In a case of the authorities putting the cart before the horse, a developer is caught in a bind as it has been told to fulfil its obligations to build public facilities but has yet to be given the necessary approvals to do so.

In the meantime, Atria Damansara Sdn Bhd, the developer of the newly opened Atria Shopping Gallery and (Small Office/Flexible Office) SOFO suite in Damansara Jaya, will have to pay a RM10 million performance guarantee to the Petaling Jaya City Council (MBPJ) if it wants a full Certificate of Completion and Compliance (CCC) for the development.

It has only received a partial CCC to open the revitalised shopping centre and will only be given a full CCC once all the requirements in the planning permission are complied with.

The soft opening for the Atria Shopping gallery was on May 28 and the entire project is set for completion by the end of the year.

In a letter to Atria Damansara, dated May 25, the council, citing a meeting by its One Stop Centre on May 19, said the developer had yet to comply with some requirements as stipulated in the planning permission dated October 28, 2013.

This includes failure by the developer, a subsidiary of OSK Properties Holdings Bhd, to build and hand over public facilities including a food court, a hall and car park on two lots of state-owned land adjacent to the development.

The developer has been instructed by MBPJ to submit an undertaking to complete the project together with a RM10 million deposit to the council.

MBPJ councillor Lee Suet Sen said: “The partial CCC was given to the developer to allow the podium shopping mall to begin operations, but businesses and offices will not be given licences to operate out of the two new towers until all requirements in the planning permission for the public facilities are complied with.”

When contacted, OSK Properties (OSKP) said the two SOFO towers on top of the retail podium were still under construction and they would fulfil their commitment to build the public facilities.

However, the developer claimed that they could not do anything until the submitted building plans for the facilities were approved.

Lee said MBPJ had no objections to the submitted plans but the delay was on the state government’s side.

“Right now, all that is needed is the signature of the state government which is the land owner,” he said, adding that although this was for the developer to follow up on, MBPJ was helping to coordinate and obtain the approval from the state.

“On our side, we want to ensure that the building and handing over of the public facilities are honoured and the developer has to complete these to get the full CCC,” he added.

In a statement in response to questions from the Malaysian Insider, OSKP said: “There is nothing we can do right now until MBPJ approves our Building Plan submission.

"As a long term investor in the area, we will continue to invest to further enhance the quality of living in the Damansara Jaya community. We hope that MBPJ will look into our Building Plan submission and approve it as soon as possible so that we can complete the construction of the facilities.”

It added that Atria Damansara Sdn Bhd was planning to submit an appeal to MBPJ on the council’s requirement to pay the full amount of the estimated construction cost as a  deposit to the council.

The developer claimed that this was beyond the industrial norm and had never happened in other councils before. "Therefore, as a long-term investor in the state of Selangor, we intend to appeal to MBPJ to be fair and follow the industry practice as laid out in the gazetted policies," OSKP said. – The Malaysian Insider