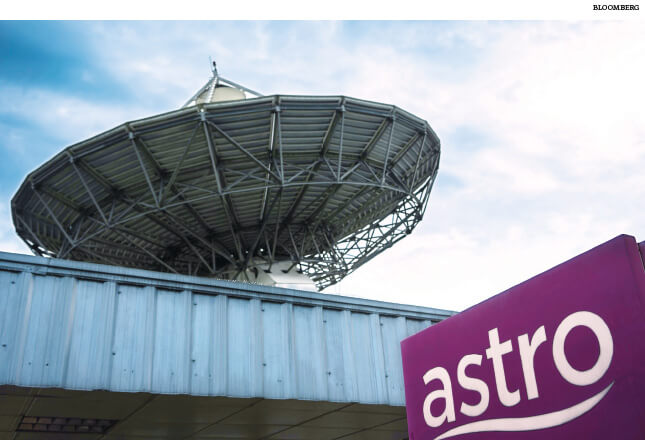 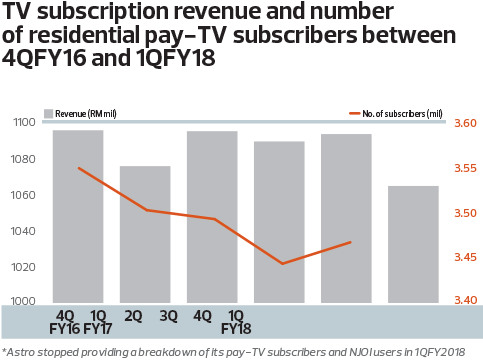 ASTRO Malaysia Holdings Bhd is said to be seeking a level playing field in the broadcasting industry, which, industry players say, is an effort by the company to slow down the march of over-the-top (OTT) video-streaming providers in the country.

According to industry officials, Astro has made recommendations to the government on regulating OTT players in market entry and flexibility, and standardised compliance with applicable laws.

“After more than 20 years of monopolising the pay-TV sector, Astro is finding that the game has changed and that it no longer has exclusive rights to use the satellite for TV content broadcasting. There are new entrants to the field.

“The emergence of OTT players, both legal and illegal, has caused a major shift in the market’s viewing trend, moving from TV sets to laptops and mobile devices. Astro has to do something or it will lose out,” says an official who used to work for the company.

As at press time, there was no response from Astro on questions as to whether OTT players, whether stand-alone or parked under a licensed broadcaster, should be regulated.

The local broadcasting industry has seen the entry of OTT players, both homegrown and foreign, in recent years. Of the local OTT players, the most recognised are iFlix, which was formed by Rev Asia Bhd co-founder Patrick Grove, and dimsum, which is owned by Star Media Group Bhd.

As OTT players do not need a licence to operate in Malaysia, they are not required to be part of the Content Forum and adhere to the Content Code — conditions stipulated in the Communications and Multimedia Act 1998 (CMA) for licensed broadcasters in Malaysia. The Act spells out the powers of the Malaysian Communications and Multimedia Commission (MCMC), the licensing of a content broadcaster and other economic, technical, social and consumer protection aspects of the broadcasting industry.

However, Astro GO, the company’s OTT content in Malaysia that is available to its linear channel subscribers, does not enjoy the same freedom as the independent, stand-alone OTT players.

Since Astro is a licensed broadcaster, Astro GO is governed by the CMA. For example, under the Social Regulation part of the CMA, a licensee is prohibited from the provision of content that is “indecent, obscene, false, menacing or offensive in character with intent to annoy, abuse, threaten or harass any person”.

If OTT players were also to be governed by the CMA, they would have to apply for the licence, which means paying the government a licensing fee and letting their business to be overseen by MCMC.

“If the OTTs are licensed, they will have to abide by all the conditions of the licensing as stipulated by the CMA. A licence can also be suspended or revoked. These are all conditions that Astro wants the OTT players to face in order to have a level playing field,” says an official of an OTT player.

MCMC did not respond to questions for this article.

Besides market entry and licensing, Astro also wants OTT players to be regulated in advertisement per broadcast hour, pricing scale and the launch of new channels and services, say industry sources. “Essentially, Astro wants everything that is required of it as a licensed broadcaster to also apply to OTT players,” says a source.

Partnership with studios a blow to OTT players

While Astro seems to be at a disadvantage compared to pure OTT players, its partnership with local and international studios and production houses means that other players will have to seek its approval if they want to broadcast certain programmes on their platforms.

For example, Astro has the broadcasting rights to HBO’s original production Game of Thrones (GOT), which is a highly popular show. So GOT can only be legally streamed via Astro GO and Astro-On-Demand in Malaysia.

Such partnerships would see Astro owning the intellectual property rights (IPR) to popular shows and movies. The geographical scope of the IPR could be for Malaysia only or for multiple countries.

“With Astro owning the IPR to popular shows and movies, other players in the broadcasting industry would have to seek licensing from it to broadcast those programmes.

“This is one of the strategies planned by Astro to ensure that it benefits from the increased demand for video streaming. If it gets to own the IPR to popular shows from all over the world, pure OTT players could be at its mercy,” says the OTT official.

To recap, in April this year, Astro broadened its collaboration with Turner Asia Pacific by forming a joint venture with Warner TV that comprises co-ownership, co-production of Asian content for global reach, distribution of Astro content and carriage of the joint-venture channel on Astro and Tribe.

Tribe is Astro’s OTT platform that is currently only available in Singapore, Indonesia and the Philippines.

In the same month, Astro entered into a partnership with CJ E&M, a South Korean media company, on the co-production of signature and original IPR for Asean, marketing and distribution of Korean content as well as partnering eSports and on-ground events.

In June, Astro and Kumpulan Media Karangkraf Sdn Bhd entered into a memorandum of understanding on the co-creation of Malay and Nusantara content.

Pure OTT players, especially homegrown, may find it hard to emulate Astro in partnering local and international studios for co-ownership of IPR as they may not have the financial muscle of 20-year industry veteran Astro.

It is not known how much it costs to own the IPR to a programme. For a comparison, the local media giant spent RM1.9 billion on content creation in its financial year ended Jan 31, 2017. Can OTT players fork out enough to at least match Astro’s library of content?

More importantly, should OTT players be made to get a licence to operate and broadcast their content in Malaysia? MCMC has a crucial role to play in this.