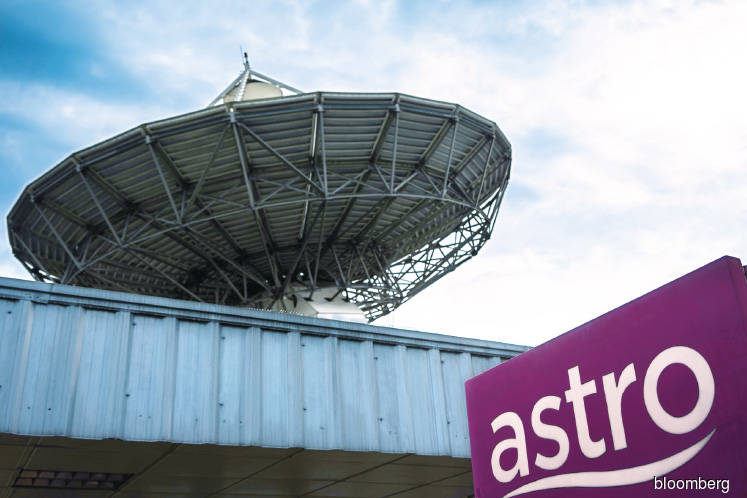 The EBITDA margin fell by 3% during the quarter ended Oct 31, 2017 (3QFY18), mainly due to higher license, copyright and loyalty fees, higher selling and distribution expenses and higher telecommunication cost, as a percentage of revenue.

“The decrease in EBITDA was offset with impairment of investment in associate of RM15.1 million in 3QFY17 and lower net finance costs,” Astro said in a filing with Bursa Malaysia.

Astro’s earnings per share for the quarter stood at 2.81 sen, compared with 2.9 sen a year ago.

Quarterly revenue slipped 1.92% to RM1.39 billion, from RM1.42 billion last year, because of a slowdown in subscription, advertising and licensing revenue, offset by higher production revenue.

The board has declared an interim dividend of three sen, amounting to RM156.41 million, payable on Jan 5. The ex-date is Dec 19 and entitlement date is Dec 21.

It is also aggressively securing engines for future growth by building an ecosystem comprising watch, listen, read, shop and serve for the individual’s increasingly digital lifestyles in Malaysia and regionally, Rohana said in a statement.

“We do so by leveraging off our scale, investments, relationships and ongoing persona. Regionally, we will forge complementary win-win partnerships, identify strategic and opportunistic investments for our growth portfolio, and learn from value creators and disrupters of the future,” Rohana added.

The group’s advertising expenditure (adex) grew marginally by 0.4% to RM526 million against the backdrop of an 8% market decline, leading to a larger share in television adex and radio adex at 44% and 74% respectively.

The group’s home proposition grew about 6% to serve 5.3 million or 73% of Malaysian households, having registered a net growth of 313,000 customers, driven primarily by its NJOI free satellite television service.

Meanwhile, as part of its strategic longer-term growth portfolio, Astro has entered into a binding term sheet with Grup Majalah Karangkraf Sdn Bhd (GMK) to form a joint venture.

“The JV would extend Astro’s online presence among the Malay-language audience and propel its combined monthly unique visitors to approximately 10 million.

“It is in line with Astro’s goal to build Nusantara and Islamic content verticals. The JV aims to pursue 360° monetisation strategies for the KK360’s content intellectual properties (IPs) across multiple platforms, leveraging on Astro’s capabilities, growing reach and engagement,” the filing added.

Astro said GMK will transfer its 38 IPs to KK360 for RM96 million, and GMK will be issued ordinary shares in KK360 in consideration of such transfer.

Barring unforeseen circumstances, the proposed JV is expected to be completed by the first half of 2018.