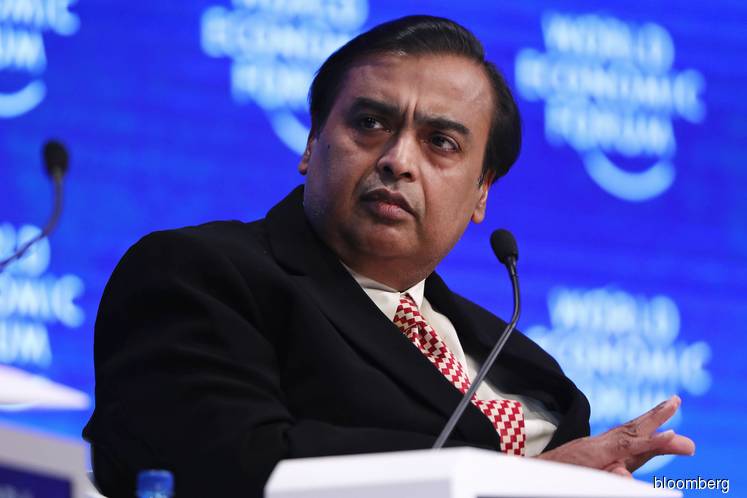 MUMBAI/NEW DELHI (May 22): Mukesh Ambani, Asia’s richest man, has lured more than US$10 billion of investment for his India-based digital platform business in a month, even as the economy struggles under the world’s most stringent lockdown to prevent the spread of Covid-19.

Ambani has been selling stakes in Jio in support of a vow to bring net debt of more than US$20 billion to zero at his oil, retail, and telecommunications group before March 2021. The deals with US-based giants from Facebook Inc to Silver Lake and General Atlantic bolster Ambani’s plan to shift away from oil and petrochemicals toward faster-growing consumer businesses.

“Reliance Industries is positioning itself as a global technology company with international technology and private equity players lining up for a Jio Platforms stake,” said Sudeep Anand, head of institutional research at IDBI Capital Market Services Ltd. The sales are also “another step toward achieving a zero-net-debt company by calender year 2020,” he said.

While global giants including Amazon.com Inc and Walmart Inc have also made big bets on growth in India’s consumer markets, the companies have faced challenges in scaling their models online in India, where restrictions protect small retailers. Ambani has vowed to build an e-commerce business that works around the barriers by recruiting so-called kirana shops as partners.

The billionaire’s success in drawing big, seasoned tech investors like Facebook and General Atlantic to Jio comes despite a sharp drop in economic growth caused by the pandemic and uncertainty about how much damage will be done before the deadly pathogen is under control. The willingness of investors to bear those risks underscores Ambani’s appeal as a determined, capable empire builder and the prospects for using Jio’s roughly 400 million wireless phone users as a springboard into digital services.

Started in 2016, Reliance Jio is now India’s largest wireless carrier. The operator stormed past rivals by building a nationwide 4G network, then offering free calling and data services at prices established competitors with older networks could not match without losing money.