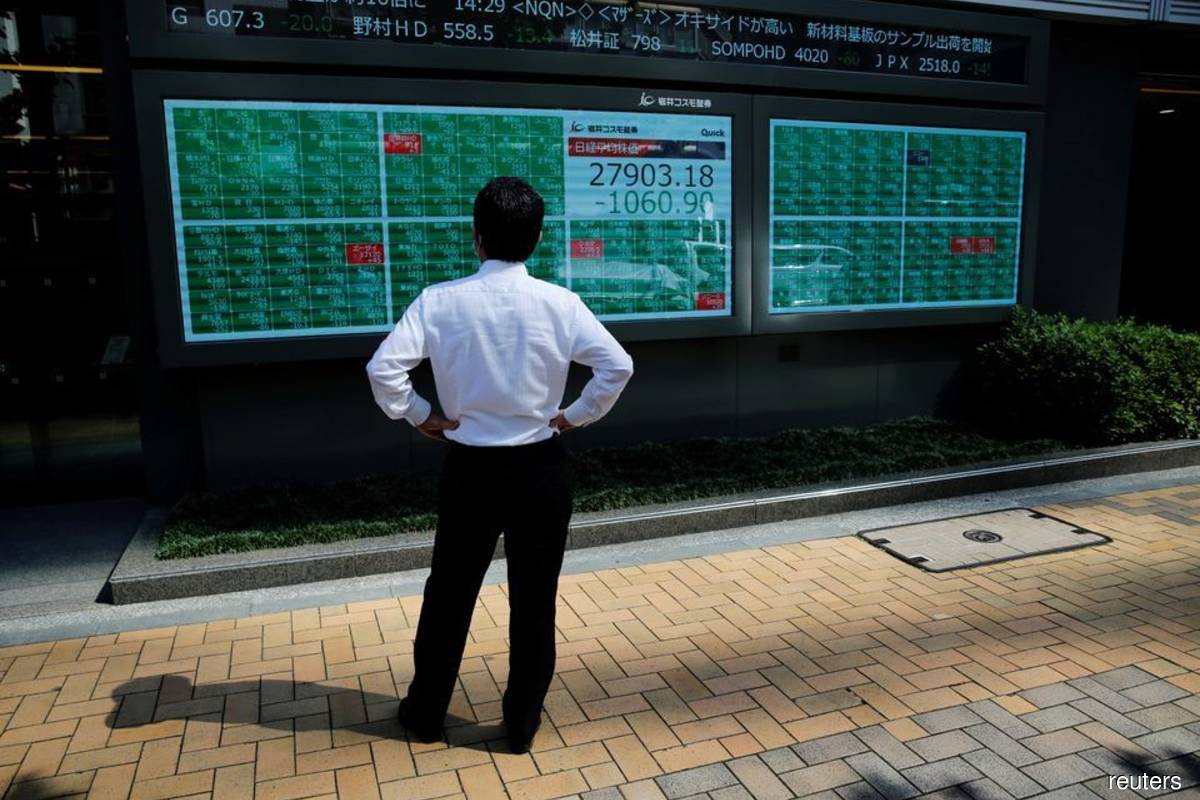 HONG KONG (Oct 8): Asian shares held onto gains on Friday, and were set to snap a four week streak of weekly losses as Chinese markets came back a bit more positive after a long holiday, encouraged by a survey showing services sector activity improving.

In the bond market, the U.S. Senate's approval legislation to temporarily raise the federal government's debt limit sparked a sell-off which saw U.S. Treasuries benchmark yields rise to their highest since June ahead of key jobs data.

Japan's Nikkei index advanced 1.8%, and MSCI's broadest index of Asia-Pacific shares outside Japan traded either side of flat, last up 0.03%, but set to gain 0.6% on the week, its best week in a month thanks to gains on Thursday.

The Asian benchmark was supported by advances in Chinese blue chips which rose 1.07% as trading resumed after the week-long National Day holiday. The improved sentiment partly stemmed from a private-sector survey that showed China's services sector activity returned to growth in September.

Over the past three months, Chinese shares have been battered by regulatory changes, turmoil in the property sector, and more recently a power crunch, but some investors are now starting to see a buying opportunity.

"The debate on China is shifting a bit away from being very negative. People are asking 'Is there a way beyond the regulatory uncertainty? How much of this is reflected in prices?'," said Herald van der Linde, Asia Pacific head of equity strategy at HSBC.

"We're neutral, we tell people not to be too negative because valuations are low."

However, bonds and shares issued by Chinese property firms slumped on Friday with no sign in sight of a resolution to cash-strapped China Evergrande Group's debt problems which is affecting sentiment in the broader sector.

Also supporting risk sentiment was the U.S. Senate's approval of legislation to temporarily raise the federal government's debt limit and avoid the risk of a historic default.

This sparked a sell off in U.S. government bonds, and 10-year U.S. Treasury yields rose to as high as 1.5940% in early Asian trade, their highest since mid June when they touched the same level. They were last at 1.5925%.

Traders are also waiting for U.S. payroll data for September due out later in the global day. They expect employment figures that are near consensus will lead the Federal Reserve to indicate at its November meeting when it will begin tapering its massive stimulus program.

CBA analysts said it was possible the jobs data could surprise on the downside, but "we think it would take a larger miss than we are anticipating to stop the [Federal Reserve] from announcing a taper in November."

They said a strong payrolls print would support the U.S. dollar because it would signal an imminent taper.

While traders waited for those figures, the dollar index, which measures the greenback against a basket of its peers, was little changed at 94.278, not too far from a 12-month high of 94.504 hit in late September,

It gained slightly against the yen, buying 111.87 yen.

Oil prices continued to be volatile, gaining on signs some industries have begun switching fuel from high-priced gas to oil and on doubts the U.S. government would release oil from its strategic reserves for now.