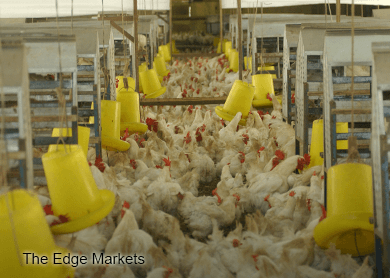 SEOUL/CHICAGO (March 7): South Korea, Japan, Taiwan and Hong Kong have limited imports of US poultry after the United States detected its first case this year of avian flu on a commercial chicken farm, South Korea's government and a US trade group said on Monday.

South Korea will ban imports of US poultry and eggs after a strain of H7 bird flu virus was confirmed on Sunday at a chicken farm in Tennessee, South Korea's agriculture ministry said.

Japan and Taiwan will block poultry from the state, while Hong Kong will restrict imports from the Tennessee county where the infected flock was located, said James Sumner, president of the USA Poultry & Egg Export Council, a trade group.

The limits will reduce the potential for major US chicken companies, such as Tyson Foods Inc and Pilgrim's Pride, to sell poultry overseas.

The Tennessee farm infected with avian flu was contracted to sell birds to Tyson.

South Korea's import ban took effect on Monday, the agriculture ministry said in a statement. Live poultry and eggs are subject to the ban, while heat-treated chicken meat and egg products can still be imported, the statement noted.

South Korea, Asia's fourth-largest economy, has been importing eggs from the United States as its worst-ever bird flu, or avian influenza (AI), outbreak has tightened the country's egg supplies.

The latest moves do not affect China, which introduced a ban on imports of US poultry and eggs in late 2015.

So far this year South Korea has shipped in nearly 1,049 tonnes of US eggs, according to ministry data, accounting for more than 98 percent of its total egg imports as of March 3.

Sumner said South Korea's decision to prohibit shipments of US shell eggs was disappointing. Its move to continue imports of certain processed egg products was "good because Korea's got this terrible AI problem and they were definitely in need of eggs," he said.

South Korea resumed US poultry imports in June last year after imposing a ban in early 2016 when bird flu cases were detected in the United States.

The resumption of the US import ban means South Korea can import chicken meat from Brazil, Chile, Australia, Canada, the Philippines and Thailand.