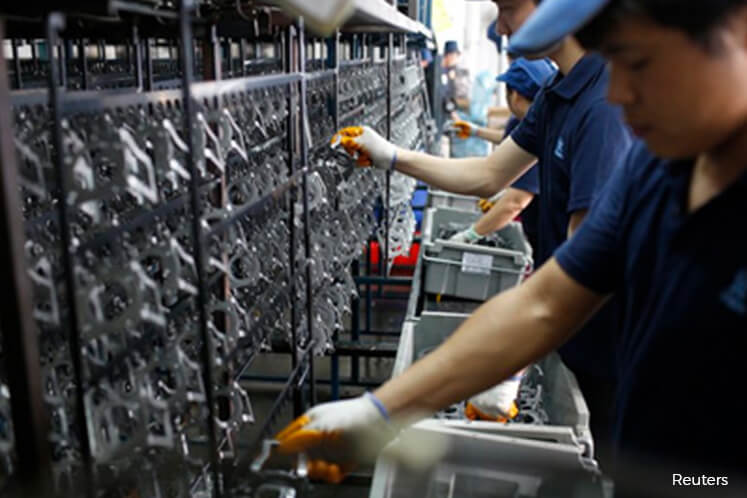 KUALA LUMPUR (June 2): The manufacturing output across Asean showed signs of a slowdown in May, reflecting weaker increases in new orders and production, which may have weighed on business confidence, IHS Markit said in its Nikkei Asean Manufacturing Purchasing Managers' Index (PMI) today.

Manufacturing performance across Asean, as noted in the index report, slipped from 51.1 in April to 50.5 in May.

Though a slim majority of surveyed nations reported an improvement in business conditions in May, latest PMI data indicated that only four of the seven countries covered by the survey saw growth across their manufacturing sectors, down from six in April.

They are Philippines, Myanmar, Vietnam and Indonesia.

IHS Markit noted that the rate of improvement was the slowest recorded for three months, as output across the region rose at the weakest rate since February.

It said slower growth in new work had weighed on production activity. Lower new orders were noted in nearby Asean markets including Singapore, Thailand and Indonesia.

There were signs of a further moderation in inflationary pressures across the region during May, though cost inflation remained elevated despite easing to a five-month low.

As for foreign demand, it noted an upturn as demand sustained in May. That said, new export sales increased at a similarly marginal pace to that seen in April, said IHS Markit.

Back home, Malaysia's manufacturing output had fallen for the first time in four months in May, as its performance fell below the 50.0 threshold at 48.7 in May.

Thailand and Singapore's manufacturing output had also hovered below the 50.0 threshold.

IHS Markit's economist Bernard Aw said the latest Nikkei Asean PMI data suggests that growth may lose further momentum towards the end of the second quarter if the trend continues.

"A key concern is that the upturn has become uneven across the region, accompanied by a slowdown in domestic demand. Fewer nations covered under the survey reported an improvement in manufacturing conditions during May.

"If this trend continues, employment prospects across the region are likely to be affected, especially when evidence of spare capacity in the sector is expected to hold back hiring," opined Aw.