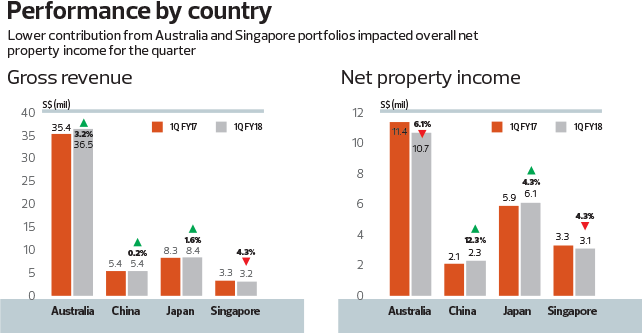 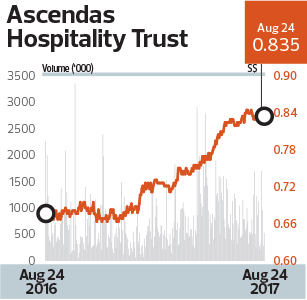 “First, we are diversified geographically — we are in seven cities [in four countries],” he says. “Secondly, we are also diversified in income stream. We have about 60% of our income coming from management contracts, where we enjoy the upside and take on the business risk.”

Under a management contract, Tan says, A-HTrust will own the hotel asset and pay the operator a fee, taking on the business risk but earning the profit directly.

“[Another] 40% are what we call fixed income, where the hotel has a master lease agreement with the operator. They pay the trust a fixed rent and a potential variable income based on certain financial performance benchmarks,” he explains.

“So, on that basis, as an investor, you will have downside protection in the sense that 40% of the income stream are more or less fixed. And at the same time, you are investing in hospitality assets where the earnings are [calculated] on a daily basis, unlike office or retail industries, where they lock in three, five to 10 years’ rental,” he says.

As for the third dimension, Tan says, 80% of the hotels that A-HTrust has invested in are three and four-star properties, where operating margins typically range from 30% to 60%.

“We are quite happy with the current 40% weightage of our total investment in Australia. Australia is a mature economy, where the rules are very transparent and titles are freehold. So for an investment destination, it is attractive,” says Tan. He adds that five years ago, the trust’s exposure to Australia was above 70%. The trust had assets under management (AUM) of RM1.69 billion as at the first quarter of its financial year ended June 30 (1QFY2018).

“Having said that, if you look at the micro level, there are individual hotels in three locations in Australia,” Tan says. A-HTrust has four hotels in Sydney and one each in Melbourne and Brisbane.

“One hotel may be about 10% of the entire portfolio, so if anything strikes a hotel, our exposure risk is very low, maybe a single-digit exposure,” he adds.

Ascendas-Singbridge is jointly owned by Temasek Holdings and JTC Corp in a 51:49 partnership.

Tan says the trust’s 1QFY2018 results were mainly affected by its Australian hotels’ exposure to seasonal factors but he believes the trust is well positioned to ride through the current downcycle.

“For the Australia hotels, there were certain events that did not pan out … in particular, at the Melbourne hotel,” he says. “As a result of that, the hotel [Pullman Melbourne Albert Park] had to look at avenues to ensure that its occupancy stayed healthy. So, our hotels embraced a few OTAs (online travel agents), to whom we had to pay a little bit more in commission.”

“Is it a feature that we are worried about? I don’t think so. I would say these are seasonal [factors]. We will continue to work with our operators to make sure that their strategies are sound,” he says.

Tan further explains that A-HTrust’s strategy will pay off once event bookings increase. “When a person books a conference for three days, all his customers will stay in the hotel. They will also spend on food and beverage, so that segment’s revenue goes up. Without events, hotels lose a fair bit of income.

“[By] going to OTAs, [we] end up getting room revenue but not F&B yield. At the same time, [we incur] higher costs from paying commission and temporary staff, but [it’s] better than leaving the rooms empty,” he says.

While Australia is giving A-HTrust a blended yield of about 8%, Tan says the trust’s China investment is performing well, generating a yield of more than 6% annually.

“Our occupancy rate over there is about 85%. Typically, most hotels in China are running at around 60% to 70%,” he says.

Due to relatively higher real estate valuations, yields from Japan and Singapore range from 4% to 5%. “Yields in Japan are compressing, but as a destination, it remains positive for a couple of reasons. One is that it is targeting to double tourist arrivals to 40 million, which we think is achievable and good for the hotel business. The only difficulty is that valuations are getting expensive,” he says.

For investment opportunities beyond the four countries, Tan says management likes places such as South Korea and Hong Kong, but has not come across any exciting opportunities. “Anything outside Asia has to be financially rewarding. From a manager’s perspective, we won’t buy an asset outside of Asia just to put a flag there,” he says.