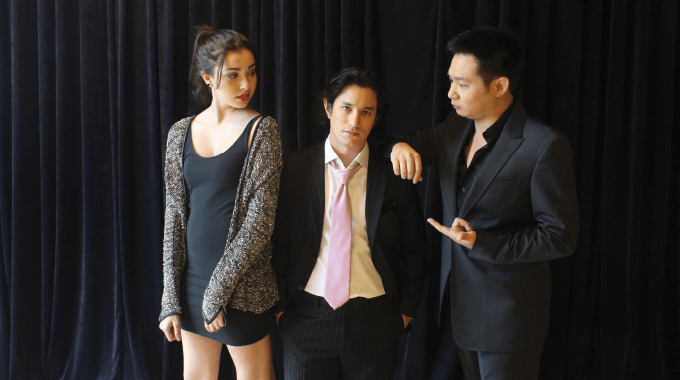 THE conflict between art and commercialism is an argument that frequently clashes across many spheres in life, especially in Hollywood’s movie business. First performed in 1988 on Broadway, Speed the Plow is a satirical take on this struggle written by acclaimed playwright David Mamet.

As a long-time admirer of Mamet’s work, director Paul Loosley pitched the idea of doing Speed the Plow to Joe Hasham, artistic director and co-founder of the KL Performing Arts Centre, last year. “Mamet has a very earthy style and strong language but is very modern in terms of dialogue,” Loosley says. The acclaimed director got the opportunity to see Mamet’s Speed the Plow in 2008 at the Old Vic Theatre in London. He was blown away by the performance, which starred Kevin Spacey and Jeff Goldblum, and loved the fast-paced dialogue between the two main characters.

The play explores the decision of choosing between a big budget film with a bankable Hollywood star or a philosophical and enlightening film — a choice that Hollywood studio head Bobby Gould and his associate Charlie Fox have to work out between them. With Gould’s temporary personal assistant Karen entering the equation, what emerges is a play that highlights the battle between art and greed.

The Malaysian production of the play stars actor-director Gavin Yap as Gould and comedian Douglas Lim as Fox. Both actors have known each other since childhood, and Loosley had always wanted to work with them together as he has always been a great fan of both their bodies of work. He also felt that their portrayals of these two characters bring life to the play.

The role of Karen is held by actress and model Amelia Henderson, who plays a major role in driving a wedge between Gould and Fox. “Karen is the mystery character of the play and everyone is uncertain of her motivations in the beginning,” Loosley explains.  “Amelia came across as naïve (when reading the script). The part of Karen says quite often that she doesn’t like being very naïve so the whole idea of being naïve is central to her character. But we don’t know whether Karen is that way because she is naturally like that or that she is being coy. “

While Karen’s character is unclear, it is easy to see that Fox is driven by fame, power and money while Gould just wants to keep his job in the fragile world of Hollywood. Not very easy roles to cast, as Loosley discovered first hand when he watched the play again last year — the role of Karen was held by television actress Lindsay Lohan, reviews were not kind.

Having once seen a superb production of the play, he went away extremely disappointed with what he had just seen the second time and he almost decided to pull the plug on his intention to direct the play. “I saw how horribly wrong this play could go and I was terrified at the thought of it,” he admitted. Fortunately for audiences in Malaysia, a well-chosen cast does mean that Mamet’s work will get an airing. He comments, “The dynamic between these three actors is simply wonderful! I couldn’t ask for more but a full house for all the shows!”

The production has kept to the original script of the play for Malaysian audiences. The dialogue in the play is witty and often outrageous strongly resonating how real life Hollywood executives communicate.  The decision to keep the script as authentic as possible is very much like the main theme of the play. “There are funny phrases in the play and I’m sure audiences here will get the drift. We don’t want to talk down to people,” Loosley says on this decision. After all, without the original script there would be no spark.