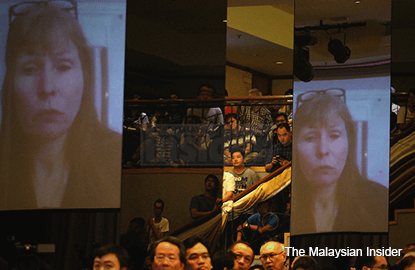 (Aug 5): A warrant of arrest for Sarawak Report editor Clare Rewcastle-Brown is not enforceable outside Malaysia, lawyers said, adding that it is also very unlikely that the British national will step foot here anytime soon for police to pick her up.

They said the Malaysian authorities were dreaming and their act only showed they were making a fool of themselves as the offence she was being investigated for was not a crime in the United Kingdom.

They said any extradition attempt on Rewcastle-Brown with the assistance of the crown  public prosecutor in Britain would fail.

Lawyer Joshua Teh said the warrant was only enforceable against Rewcastle-Brown if she came to Malaysia to submit to the investigating agency.

"The warrant has no value outside Malaysia. It was just obtained to put on a show to the gullible Malaysian public," he told The Malaysian Insider.

Teh said the warrant of arrest only showed that Rewcastle-Brown was wanted by Malaysian authorities.

"Police can only arrest and detain her if she on Malaysian soil," he added.

He said this in response to a report quoting the head of the Criminal Investigation Department Datuk Seri Mohmad Salleh that police had obtained a warrant of arrest for Rewcastle-Brown and would begin the process of obtaining help from Interpol and Aseanapol to facilitate her detention.

Mohmad said Rewcastle-Brown, who is based in the UK, would be investigated under Section 124B and 124I of the Penal Code, which relate to activities that are detrimental to parliamentary democracy.

Mohmad in a statement last evening said the warrant of arrest was obtained from the Kuala Lumpur High Court.

Section 124I pertains to the dissemination of false reports which was likely to cause public alarm and those found guilty can be jailed for up to five years.

Section 124B, meanwhile, allows for imprisonment up to 20 years for actions that are detrimental to parliamentary democracy.

The Sarawak Report website was blocked by Malaysian Internet regulators more than two weeks ago purportedly because the site carried false information that could disrupt "national stability".

Lawyer Datuk N. Sivananthan said British prosecutors would not render any assistance to their Malaysian counterparts to extradite her as the United Kingdom did not have an offence for action that were detrimental to parliamentary democracy.

"It is definitely not an offence there and so extradition is out of question," said Sivananthan, who is also a International Criminal Court counsel.

Lawyer S.N. Nair described the act of the police similar to pulling wool over gullible Malaysians' eyes to demonstrate that they were doing something against the "white woman".

He said Malaysia and the United Kingdom may have an understanding to extradite a suspect but the British government would be unlikely to render assistance because the offence under section 124 of the Penal Code was something alien there.

"The crown public prosecutor there will not do anything illegal to send Rewcastle-Brown to Malaysia as the public and media there are vigilant," said Nair, an ex-police officer who has handled extradition cases.

Nair said the warrant of arrest for Rewcastle-Brown was only a starting mechanism and the Attorney-General of Malaysia would have to seek the cooperation of his British counterpart to arrest her.

"They will decline to act based on the evidence presented by the Malaysian A-G if they feel there was no case.

"If there was a case, prosecutors in England have to go the court to obtain a warrant and the court may decline such an application," he added.

Looking at the evidence from press reports, Nair said it was virtually impossible for any application for warrant of arrest or extradition order to succeed.

"This act by the police is an exercise in futility and waste of public funds," he added. – The Malaysian Insider