Around the world in four hours

THE Sydney Opera House, Eiffel Tower, Niagara Falls, Taj Mahal and Statue of Liberty I can proudly say I visited in less than four hours.

How is that possible, you ask. Let me explain. When I was in Hong Kong recently, I decided to make an hour’s train trip to Shenzhen, China.

My friends recommended a mini tour of Shenzhen’s Window of the World. The thought of walking in a theme park alone was not appealing, what with the scorching weather.

However, after a rather unexciting first day of shopping and sightseeing, I decided to give it a go.

I arrived at the park via subway at 9.30am. Given only one day to “tour around the world”, I aimed for the Oceania, Africa, Europe and America sections, which along with Asia, completes the five themed zones at the park.

In a nutshell, the Window of the World is a miniature replica theme park spanning 48ha of land that houses 130 world-famous tourist attractions. Reproduced in detail, the replicas are built on calculated ratios of the actual landmarks.

I walked past iconic architectural marvels, including Angkor Wat, the Leaning Tower of Pisa, the Pyramids and the Sphinx, as well as the Roman Colosseum and the Tower of London.

Depending on how fast you walk and how long you linger to view them, the attractions can be covered as quickly as half a day.

While there aren’t any park rides such as roller coasters, Ferris wheels, water rides or other usual theme park fixtures, guests can, however, pay to paddle boats, rent small auto bikes and scooters, or ride on its monorail to cover the park.

Many of the replicas are barricaded or surrounded by landscape to  protect it from stampeding or damage from overcrowding.

A walk in the park itself makes it worthwhile to visit. With lots of greenery everywhere, most parts of the park are well shaded with benches for people to take a breather. The 20-year-old park is certainly well maintained.

I liked the Eiffel Tower replica the most. At 108m high, which is one third the height of the original structure, the Shenzhen version is one of the more imposing attractions at the park.

A highlight was climbing up its stairs to the midpoint of the structure to get a bird’s eye view of the park.

At 180 yuan (RM101) per entry, it was certainly not for those on a budget. Still, it is worth it for first-timers wanting to “wander around the world” in a jiffy. 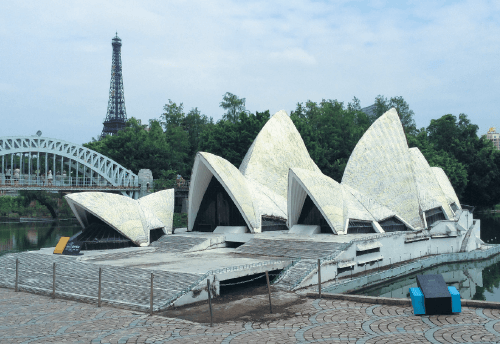 This article first appeared in The Edge Financial Daily, on December 17, 2014.