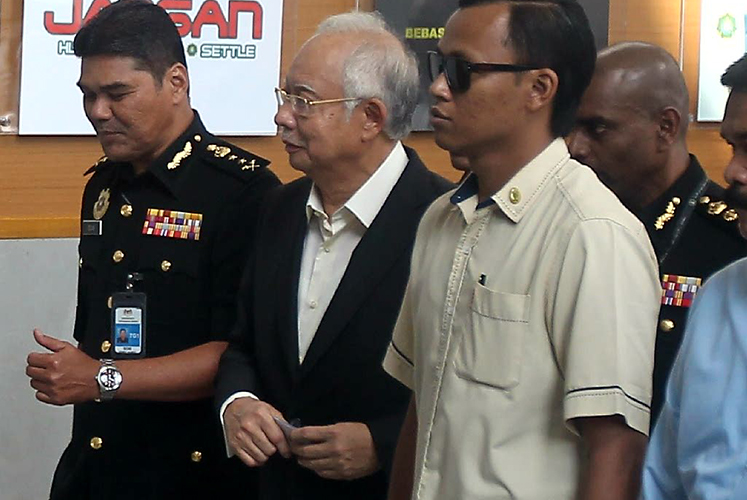 KUALA LUMPUR (March 28): The High Court here today fixed Wednesday as the beginning of the hearing of the seven criminal breach of trust and abuse of power charges against former Prime Minister Datuk Seri Najib Razak in relation to the RM42 million from SRC International Sdn Bhd that was deposited into his accounts.

Justice Mohd Nazlan Mohd Ghazali fixed that the hearing will start at 2pm that day.

Earlier, the prosecution, led by Datuk Suhaimi Ibrahim, wanted April 3 and April 8 to 12 for the hearing.
Advertisement

However, Najib's lawyer Tan Sri Muhammad Shafee Abdullah and Havinderjit Singh are not available from April 8 to 12, according to Havinderjit, who told the court that both he and Shafee had other cases on those dates.

The lawyer instead suggested that the court fix the hearing dates after September, with the reason that beginning April 15, their team would be involved with another trial for Najib that involves RM2.28 blllion worth of 1Malaysia Development Bhd (1MDB) funds. In the 1MDB case, Najib is facing 25 counts of money laundering and abuse of power.

"We may need some time to prepare for the 1MDB case which is a case that is also given priority," Havinderjit argued. The 1MDB trial has been fixed to start on April 15 until May 3 at the High Court by Justice Collin Lawrence Sequerah.

Justice Nazlan then suggested that the case could start earlier, on April 1, but Suhaimi said the prosecution needed time to subpoenae the witnesses and that fixing the hearing on next Monday would give them too short a period to do so.

Suhaimi also told the court that the prosecution is toying with the idea of writing to the Chief Judge of Malaya, Tan Sri Zaharah Ibrahim, to ask for permission for some dates from the 1MDB trial to be allocated to the SRC trial.

"The prosecution also feels this case is a priority, besides the 1MDB case. We cannot have the hearing on Thursday (April 4) as there are appeals by Najib and the prosecution at the Federal Court.

Both Havinderjit and Nazlan are of the view that it would be up to the prosecution to write to Justice Zaharah as it involves the same parties. "We do not mind if the 1MDB case is taken off for this case," Havinderjit added.

Nazlan then fixed the start of Najib's SRC trial on Wednesday, saying the court will take it from there after that.

Meanwhile, deputy public prosecutor Mohd Izzat Fauzan told the court that the prosecution will not provide a list of their witnesses to the defence in the SRC case following the Court of Appeal's decision last week that it need not provide the document.

Earlier today, Najib was at Justice Sequerah's court, where the appointed prosecutor and former Federal Court judge Datuk Seri Gopal Sri Ram said the prosecution applied to amend the second, third and fourth charges faced by Najib. Following that, the court interpreter read the amended charges to Najib and he claimed trial to all three.

The amended charges were:
i) that Najib abused his power as the Prime Minister, Finance Minister and 1MDB chairperson of the board of advisors to receive RM90.899 million in his AmIslamic accounts between Oct 31, 2012 and Nov 20, 2012, by approving 1MDB subsidiary 1MDB Energy Sdn Bhd, to bid RM10.6 billion for the proposed acquisition of Tanjong Energy Holdings Sdn Bhd, where he has an interest.

The former Finance Minister, is also said to have approved the acquisition of equities in Sykt Mastika Lagenda Sdn Bhd, at an aggregate purchase price of RM2.75 billion and further approved 1MDB Energy to undertake the issuance of US$1.75 billion 10-year structured interests notes.

ii) that Najib had abused his powers as the Prime Minister, Finance Minister and 1MDB chairperson of the Advisory Board of 1MDB, by receiving RM2.081 billion in his AmIslamic accounts between March 14, 2013 and April 10, 2013, by approving 1MDB to enter into a joint venture with Aabar Investments PJS and approve a letter of support to 1MDB Global Investment Ltd for the purpose of the issuance of US$3 billion bond on behalf of 1MDB, in which the former premier has direct interests.

iii) that Najib abused his position as Prime Minister, Finance Minister and chairperson of the 1MDB Advisory Board when he received gratification of RM49.93 million by approving 1MDB through 1MDB Energy to obtain a US$300 million loan through the Initial Bridge Financing Facility from Deutsche Bank AG, and for the same bank to give an additional US$975 million loan for the purpose of 1MDB Energy Group's initial public offering.

All three charges were made under Section 23 of the Malaysian Anti Corruption Act 2009. If found guilty, Najib stands to face a maximum jail term of 20 years and a fine not less than five times the amount involved.

There was a debate regarding the amendments to the fourth charge, after which Justice Sequerah directed the parties to address the matter when the trial starts on April 15. He also fixed April 1 as case management.