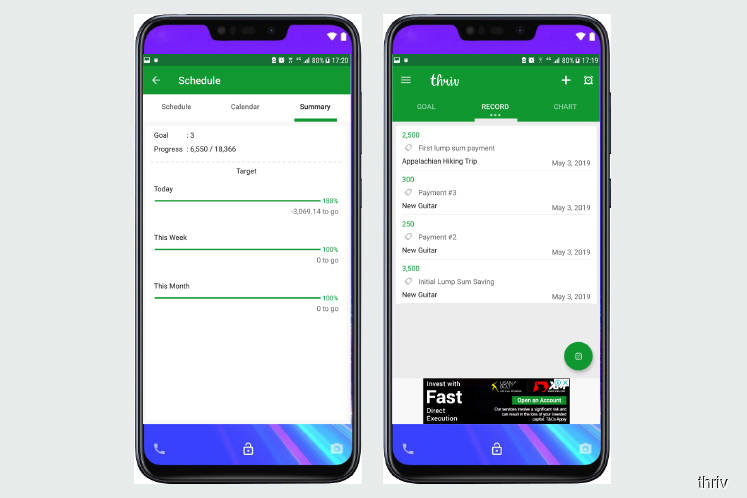 Most personal finance apps are meant to break down big financial milestones into slightly less daunting, bite-sized tasks. These apps try to put a slightly friendly face on otherwise difficult financing decisions — cutting out expensive coffee runs in order to have money set aside to save after key monthly expenses, for instance. Many of these apps encourage users to link their bank accounts, provide some form of investing platform, or a combination of the two.

Thriv, on the other hand, has humbler ambitions. It has been around for a couple of years now, and the Indonesia-based app developer is on a mission to get people to manage their personal finances on a smaller scale. It is an interesting approach to what is now a very saturated space: Target new, relatively inexperienced users and get them used to the idea of app-based personal finance tools by starting them out on small-ticket items.

Thriv encourages users to set simple goals, such as saving for a new laptop, bicycle, or even a vacation. Take, for example, a RM5,000 guitar. Users can upload a picture of the instrument, create some cursory notes about it and even attach a link to an online store that sells it, if they like.

The app then prompts the user to input the price, followed by a specific time frame, during which the user will set aside money towards the guitar. Suppose the user decides to give himself six months and commits to putting money aside on a monthly basis (the app allows users to set daily, weekly, fortnightly, or monthly savings reminders), the app then calculates the amount that needs to be put away every month in order for the user to be able to afford the guitar.

In addition, there is a simple analytics function that allows users to track their progress on one or all of their savings goals. It tells them how much they have saved so far, how consistently they have been tracking their savings intervals and how much more they have left to save and over what time frame. These easy-to-understand statistics can be viewed as a bar graph, line graph or pie chart.

The overall app design is clean and uncluttered, which is good, although one major drawback is that users of the free version are only allowed a maximum of three targets before they are prompted to purchase the full app (which provides users with unlimited savings targets to track, among other substantive and aesthetic add-ons). Also, it is possible that the app developer is a one-man team because there are some surprisingly rough edges to the app. Most notably, it does not seem to allow the use of decimal points, so savings targets can only be input as whole numbers.

On the whole, Thriv is an intriguing idea, limited by the developer’s lack of a clear monetisation model and a long-term plan for user engagement. With some fine-tuning to the app and more thought on user engagement, Thriv has the potential to become a compelling social platform built around a community of spendthrift users.