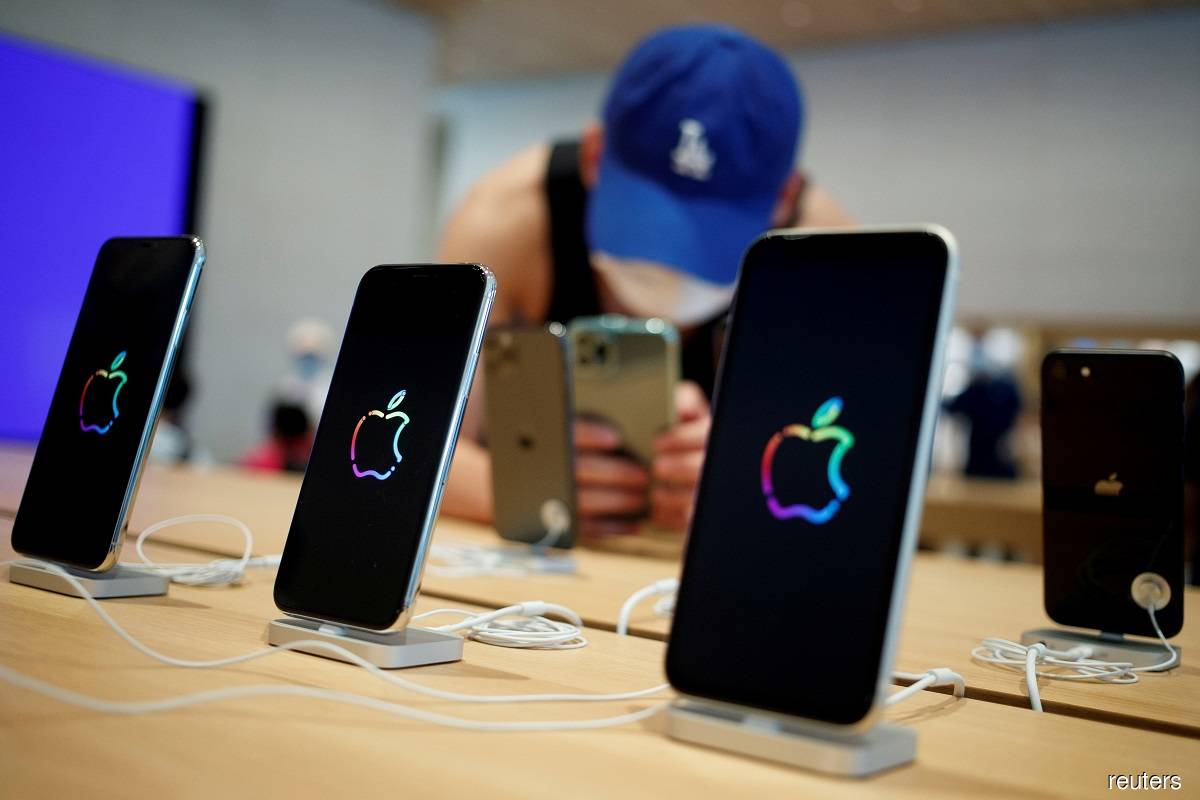 LOS ANGELES (July 31): Apple Inc has reported quarterly revenue that crushed Wall Street forecasts after locked-down consumers snapped up new iPhones, iPads, and Mac computers to stay connected during the pandemic. The stock jumped as much as 6.3% in extended trading.

The world's largest technology company also announced a four-for-one stock split after its shares surged more than 80% in the past year, and confirmed that the next iPhones will launch a "few weeks later" than usual.

Fiscal third-quarter (3Q) revenue came in at US$59.7 billion, a record for the June period, Apple said in a statement. That was up 11% from a year earlier and smashed analysts' estimates of US$52.3 billion, according to data compiled by Bloomberg.

The pandemic is keeping people at home, which has spurred demand for Apple devices to help millions of consumers use the internet to keep in touch with friends, family, and co-workers.

"In uncertain times, this performance is a testament to the important role our products play in our customers' lives," Apple chief executive officer (CEO) Tim Cook said in a statement.

The pandemic likely boosted iPad and Mac sales due to lockdown rules and an increase in remote learning, while Apple store closures were weighing on iPhone sales, the CEO said in an interview with Bloomberg TV.

Apple's cheaper iPhone SE, released in April, was also well timed for leaner economic conditions. There were also minor updates to the iPad Pro and MacBook Pro, and new accessories like an iPad Pro keyboard with trackpad. The company plans to launch new Mac computers with its own processors, a cheaper HomePod, and a slew of new iPhones later this year.

During a conference call, chief financial officer Luca Maestri said the new handsets will be slightly delayed this year, suggesting an October launch.

The Cupertino, California-based technology giant did not provide guidance again due to the ongoing impact of Covid-19.

Revenue from the iPhone was US$26.4 billion, beating analysts' expectations of US$21.3 billion. IPad revenue was US$6.6 billion, a strong increase from US$5 billion a year ago, while the Mac brought in US$7.1 billion, another big jump from US$5.8 billion in the same period of 2019.

Services, which include the App Store, Apple Music, and iCloud subscriptions, generated sales of US$13.2 billion, up from US$11.5 billion a year ago and roughly in line with Wall Street expectations. The company said it has more than 550 million paid subscriptions and is on track to reach 600 million by year end.

Cook said some services, including AppleCare repairs and advertising, were negatively impacted by the pandemic. The virus has also paused production of Apple TV+ shows shot in Los Angeles, the CEO added. Still, he cited record revenue for the App Store, Apple Music, video products, and cloud services.

The June quarter also included earnings per share of US$2.58, an 18% increase, and a record for the company's installed base of active devices.

Apple's Wearables, Home, and Other Products category, one of the firm's fastest segments that includes the Apple Watch and AirPods, brought in US$6.5 billion in revenue. That beat Wall Street predictions of US$6.1 billion.