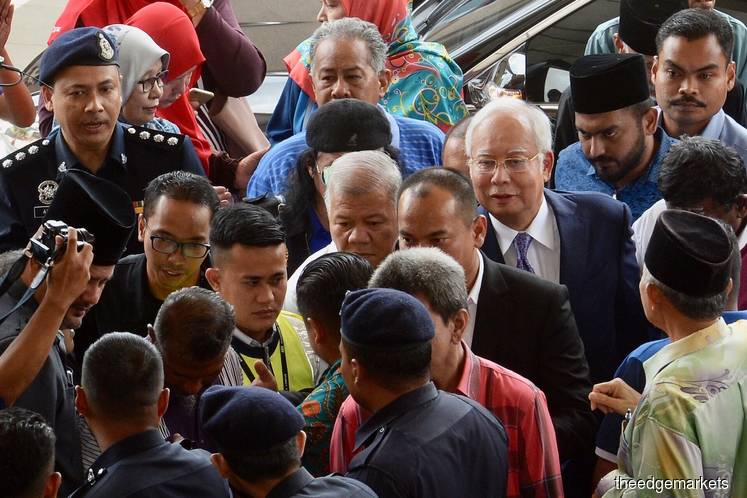 The three-member bench, however, allowed the prosecution's appeal against having to show Najib's defence team the terms of appointment for senior lawyer Datuk Sulaiman Abdullah as a prosecutor.

The appeals by Najib that were dismissed were regarding the pre-trial gag order they were seeking, getting further documents such as witness statements recorded by the Malaysian Anti-Corruption Commission and under the Anti-Money Laundering, Anti-Terrorism Financing and Proceeds from Unlawful Activities Act 2001 (AMLATFPUA), and the transfer of the case to the High Court following the withdrawal of the Section 418A Criminal Procedure Code (CPC) certificate.

Justice Malanjum delivered the decision with regard to the gag order, while Justice Wong gave his grounds to the prosecution's appeal on Sulaiman and Najib's appeal over the validity of the transfer from the Sessions Court to the High Court.

All in all, the four appeal applications by Najib had derailed the SRC trial by almost two months, as it was initially slated to begin on Feb 12 until March 3.

The hearing has since started on April 3 and will resume on April 15 to May 10.

Justice Malanjum, in his oral decision regarding the pre-emptive gag order, said the court has to consider whether what Najib is seeking is adequate, valid, and proportionate and whether this was necessary.

The CJ noted that the trial is conducted before a judge and that there are options available for the former premier to seek besides the pre-emptive gag order.

"The options are for him to file a defamation suit or initiate contempt proceedings. Furthermore, the appellant (Najib) is given the opportunity to table his side of the story (if defence is called)," he said.

Justice Malanjum also said what Najib is seeking is to ban the foreign media from reporting, but the court would not be able to issue such an order.

"Hence, we unanimously dismissed the appeal," the CJ said.

Justice Wong, delivering the bench's decision regarding the prosecution's appeal on Sulaiman's appointment, ruled that the appointment letter is a privileged document.

The judge said it is Attorney-General Tommy Thomas' right to appoint a lawyer from outside the chambers as a prosecutor.

"Hence, we allow the prosecution's appeal and reinstate the High Court's decision," he said.

The Court of Appeal had last month ordered the prosecution to produce Sulaiman's appointment letter to Najib's lawyers.

With this decision, Justice Malanjum directed the defence to return the documents along with the copies to the prosecution.

On the issue of the validity of the transfer, Justice Wong ruled that there was no breach of natural justice on the former premier, with regard to the trial judge Mohd Nazlan Mohd Ghazali deciding to move the case to himself following Thomas' withdrawal of the Section 418 certificate.

The judge said the trial dates had already been fixed seven months before that and the bench noted that Justice Nazlan had acted judiciously to expedite the matter to meet the ends of justice by transferring the case to himself when the seven charges had remained intact, despite the Section 418 withdrawal.

"To transfer the case to the same high court is expedient to meet the ends of justice. Hence, we dismiss the appeal," he said.

On getting further documents, Justice Idrus noted that the prosecution had already fulfilled all the requirements under Section 51A of giving to the defence the necessary pre-trial documents which it wants to use, to the defence.

"A plain reading of Section 51A requires the prosecution to hand over the first information report, any document tendered as evidence and any documents favourable to the defence.

"All this had been fulfilled at the pre-trial stage," Justice Idrus said, adding that the prosecution is not obliged to give further documents including those sought under Section 30 of the MACC Act and Section 40 of the AMLATFPUA

He also ruled that Najib's lawyers had also failed to show how their client was being discriminated against by the non-disclosure of the documents, including witness statement and for this reason, the court dismissed the appeal.