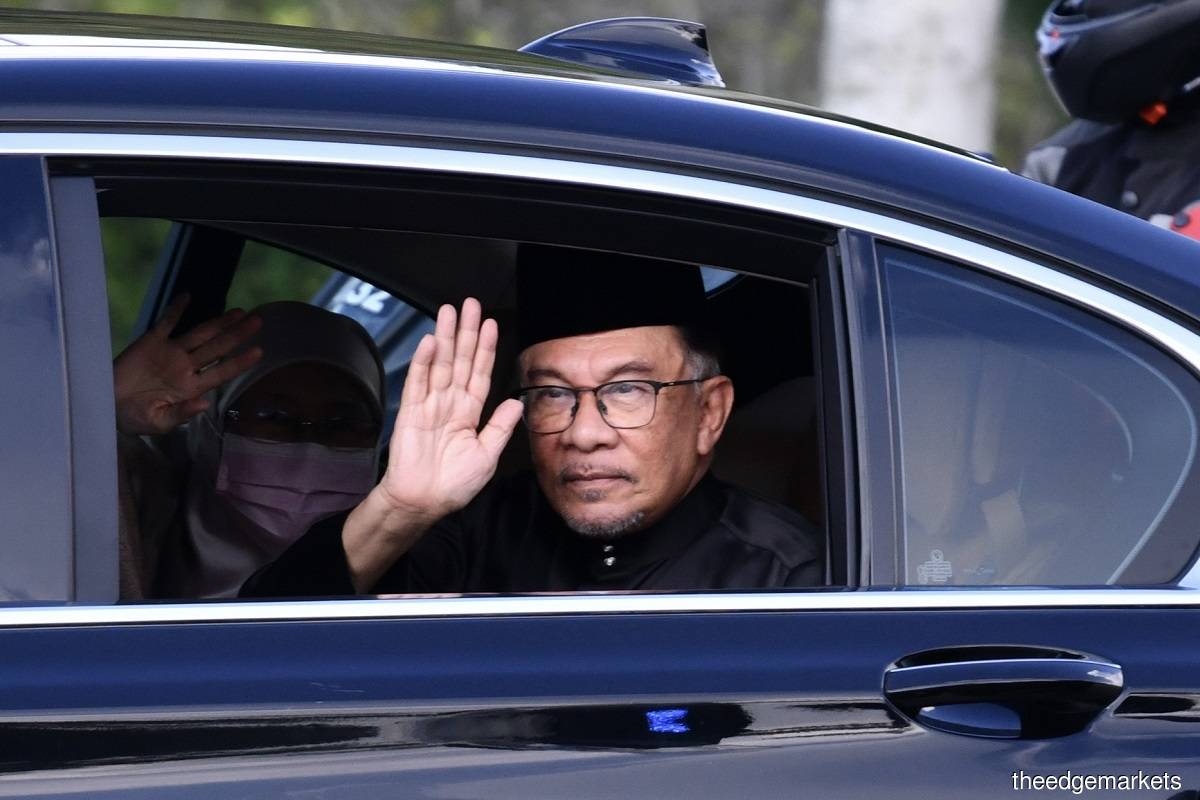 (Nov 24): Datuk Seri Anwar Ibrahim, the almost man of Malaysian politics, finally clinched the country's premiership after decades of waiting. Now, the reformist leader must make sure that he keeps the job.

That will not be easy in a country that has now had four prime ministers in four years. Former finance chief Anwar is likely to control an unstable majority and his administration looks set to include his long-time nemesis, the graft-tainted United Malays National Organisation (Umno). That may prove an obstacle to policymaking and could easily bring his government down.

Anwar, 75, will also have to steer an economy that is on the most fragile of rebounds at a time of surging inflation and living costs. He will also face pressure from an opposition dominated by an increasingly popular hard-line Islamic party.

Here are some of the challenges that Anwar and his government will confront in the months ahead:

The first test will be who gets what in Anwar's new government under a power-sharing formula. Anwar will have to appease the majority Malays and Umno while keeping traditional coalition allies happy. That could see a bloated Cabinet as he seeks to ensure that the different parties each has roles.

"Malaysia's new Cabinet should not be too big like the previous Cabinet," said Prof Dr Awang Azman Awang Pawi, an associate professor with the Academy of Malay Studies at Universiti Malaya. "Anwar needs an efficient and trusted Cabinet."

Pakatan Harapan, Anwar's coalition, mentioned two deputy prime ministers in its manifesto, including one from the underdeveloped but resource-rich states of Borneo. An Umno leader such as Datuk Seri Ismail Sabri Yaakob, the former prime minister, or ex-defence minister Datuk Seri Hishammuddin Hussein may also be put forward as a deputy premier to help keep the party within Anwar's government.

The centre-left Democratic Action Party (DAP), which holds the largest number of lawmakers in Anwar's bloc and has the support of minorities, may take a back seat on Cabinet deliberations to ensure unity and to counter the polarising narrative that it is anti-Malay. During its short time in federal government, DAP controlled the finance and transport portfolios.

Umno, linchpin of former ruling bloc Barisan Nasional (BN), is beset by infighting and there is a push to remove its chief, Datuk Seri Dr Ahmad Zahid Hamidi, who is also the BN boss. The politician pushed for snap polls that saw BN lose significant ground in Malay-dominated regions and was instrumental in pushing for the coalition to be part of Anwar's government.

Umno will hold its general assembly on Dec 21, which may see Zahid lose his job, a development that would create turmoil for Anwar. Zahid's potential replacements may not be as willing to work with Anwar's coalition.

Keeping Umno in government will also depend on the kind of Cabinet posts and policymaking input that Anwar offers its leadership.

When it was previously in government, Anwar's multiracial coalition cracked down on institutional corruption, going after Umno leaders. It orchestrated investigations into troubled state fund 1Malaysia Development Bhd, which led to former prime minister Datuk Seri Najib Razak starting a 12-year prison term for his involvement this year.

With Umno likely to be included in the new administration, it will probably push for a royal pardon for Najib, which could anger Anwar voters and allies. Any exoneration of Umno chief Zahid, who faces corruption charges associated with his foundation, would pose the same problems.

And if Zahid does go to jail, he is likely to be replaced by a leader who may not want to work with Anwar.

Anwar may have to compromise on his coalition's manifesto and pledges for reform as he seeks to maintain his unity government. While he will not face hurdles in carrying out welfare-oriented promises — which sound similar to those of his rivals — a pledge to eliminate racial and religious discrimination may not go down so well.

The majority Malays and indigenous communities enjoy a "special position" per the constitution, which has translated into government policies that give preferential treatment in areas such as public-sector jobs, housing, and higher education.

In 2018, Pakatan Harapan had to backtrack on a decision to ratify a key United Nations anti-discrimination treaty after opposition from Umno and an Islamist party, raising concerns at the time that its momentum was stalling.

Malaysia's economy is set expand at a slower pace of 4% to 5% in 2023, compared with more than 7% this year, while economists expect the central bank to continue to raise interest rates in a bid to tame inflation. That could prompt Anwar to take an increasingly populist stance and adopt Umno's more generous promises of cash aid to help the country's poorest. "There's a recognition that the focal point needs to be on the economy and the social fabric," said Bridget Welsh, honorary research associate with the University of Nottingham Asia Research Institute Malaysia. There will be "more attention to the social safety net and to the vulnerabilities of different communities".

Umno pledged to ensure every household earned more than RM2,200 a month, meaning the government would top up incomes to ensure that they reached that threshold. If Anwar's government takes such measures, it may delay its fiscal consolidation plan and earn the ire of credit rating firms.

Parti Islam Se-Malaysia, or PAS, won the most seats in the 15th general election, taking Malay support from Umno while positioning itself as scandal-free and focused on bolstering the Muslim faith.

As the biggest opposition party, PAS is likely to campaign to limit the open sale of alcohol in Malaysia and to close gambling outlets. This could put pressure on Anwar's moderate agenda and force his administration to offer more religious policies in education and the civil service, a strategy used by former leader Tun Dr Mahathir Mohamad in the 1990s.

PAS' long-stated objective has been to turn Malaysia into an Islamic state. For years, it has pressured the federal government to allow it to implement strict Islamic laws in the eastern states of Kelantan and Terengganu. With the most number seats in Parliament, PAS could band together with former prime minister Tan Sri Muhyiddin Yassin's party and even pressure some Umno lawmakers to make an attempt to seize power again.