Another rate cut by BNM soon? Goh says she does not believe BNM would follow with another rate cut unless 2Q to 3Q of 2019 GDP data disappoint alongside worsening consumer and business sentiments. Photo by Bloomberg 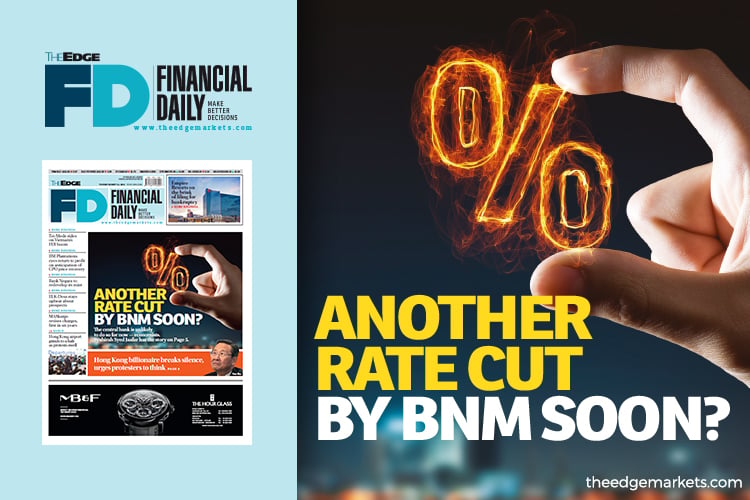 KUALA LUMPUR: After the aggressive interest rate cuts last week by a handful of Asian central banks that surprised the markets, there is strong expectation that more countries will follow suit in the coming months.

This is because the impact of the US-China trade war, cited as a chief reason for the rate cuts, has been equally felt by many nations.

Regional markets mainly took cue after the US Federal Reserve (Fed) lowered rates for the first time in more than a decade. The central banks of India, New Zealand and Thailand shocked markets when they announced rate cuts last Thursday, and likewise the Philippines' central bank in the following day.

MIDF head of research Mohd Redza Abdul Rahman reckons it is unlikely for BNM to announce a rate cut at its next monetary policy meeting on Sept 12.

If anything, historical occurrences have shown a follow-up rate cut tends to happen after a drastic drop in the gross domestic product (GDP), he told The Edge Financial Daily when contacted.

UOB senior economist Julia Goh expressed a similar view in a recent report, stating she does not believe BNM would follow with another rate cut unless the upcoming second quarter (2Q) to 3Q of 2019 GDP data disappoint alongside worsening consumer and business sentiments.

The Malaysian central bank reduced the overnight policy rate (OPR) in May to 3%, its first reduction since raising the rate by 25 basis points in January 2018.

“I think our economy is still doing well and we were ahead of the curve when we cut rates in May,” said Mohd Redza. “It was unnecessary to do so when looking from the macro indicators back then, but more of a foresight into the uncertainties going forward.”

“[Yet] we have seen improvements since the rate cut, with banking system loan growth still showing great numbers for mortgage and business loans in May and June.

“And May’s distributive trade reached a record value of RM108 billion, with all components; wholesale, retail and vehicle sales showing no signs of weakness.

“This bodes well for private consumption, making up more than half of Malaysia’s GDP components,” Mohd Redza added.

However, he cautioned weaknesses in manufacturing growth could get worse, especially when the remaining US$300 billion worth of Chinese exports are taxed by the US, including all technology products.

“While we are seeing an improving headline on trade surplus [net exports] despite the decline in exports because of weaker manufacturing activities, we need to look deeper to see if this is due to imports which slowed at a faster rate than the rate [at which] exports had weakened,” he noted.

Last Friday, the Statistics Department said Malaysia’s June Industrial Production Index grew 3.9% year-on-year. Mohd Redza noted the manufacturing component only grew 1.2% compared with 3.1% in May, while the electricity component declined 7.9% in June compared to a 2.4% growth in May.

“If the softening demand for E&E (electrical and electronic) products gets worse, we might see a spillover impact on domestic private spending. And possibly stir the need for another rate cut. But we don’t think it will happen so soon,” he said.

He added that with the expected recovery of the Kebabangan gas field, exports of liquefied natural gas should improve. “This will mitigate the decline of manufacturing exports and hence our GDP numbers will still be good for the rest of 2019,” Mohd Redza said.

CIMB Group chief economist Dr Donald Hanna opined that BNM, just like other central banks in the region, needs to adjust its policy to reflect shifting domestic and international outlooks, adding that the external economic prospects have dimmed for many countries, including Malaysia.

“We expect July’s inflation to slow to 1.2% year-on-year after last month’s 1.5%. The combination provides BNM with the rationale and space to cut rates by 25 basis points in the coming months,” said Hanna when contacted.

However, this cut will not be a knee-jerk reaction to the Fed’s cut, he said.

“Indeed, the surprise to the market from the Fed was the reticence to cut as aggressively as what the market had expected. The BNM cut will likely be due to the continued lowering of a bamboo curtain between the US and China,” said Hanna.

By and large, he said BNM has every right to cut the OPR in view of the prevailing economic conditions.

However, he said the volatility of the US dollar against the ringgit may have made the central bank somewhat cautious about its decision.

“The uncertainty over the upcoming review by FTSE Russell on Malaysia’s govies (government bond) position in the World Government Bond Index should also not be taken lightly as it may have [a] negative repercussion on the ringgit.

“Perhaps it’s best to wait for the final outcome before BNM decides its next course of action,” he told The Edge Financial Daily.

“Are we behind the curve? Perhaps not. Growth is still fairly decent although the economy could be operating slightly below potential,” he added.

Mohd Afzanizam said whether Malaysia needs another rate cut would be entirely dependent on growth prospects.

“As mentioned, downside risks emanating from the external [environment] are quite visible. Being an open economy, Malaysia would be susceptible to fluctuations in external demand,” he said.