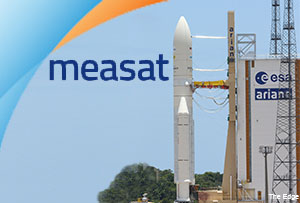 The US$350 million (RM1.1 billion) Measat-3b lifted off at 6.05am today (Malaysian time). The communication satellite is Malaysia's largest satellite, weighing 5,897 kg with total satellite power of 16kW.

Jailani said the successful launch of Measat-3b was another milestone in the development of Malaysia's satellite system that would benefit Malaysia and the wider Asia Pacific region.

"Measat's successful procurement and launch of the Measat-3b satellite is a great achievement for Measat, Malaysia's ICT infrastructure and for the Malaysian space industry," he said.

According to Jailani, Measat's achievement, together with ongoing Malaysian government initiatives such as the extensive implementation of broadband infrastructure under the high speed broadband project, will allow the nation to capitalise on the increased connectivity and coverage.

Brown-Kenyon said Measat-3b would be a key contributor to the Asian pay TV landscape. He said the satellite would support direct-to-home (DTH) television platforms, which would serve more than 18 million households.

Built by Airbus Defence and Space in Toulouse, France, MEASAT-3b offers a design life of about 15 years.

To be fully operational this October 15, Measat-3b will be co-located with the existing Measat-3 and Measat-3a satellites.

With the launch of Measat-3b, Measat's satellite fleet has grown to include capacity across six satellites. The group has four more satelittes in the pipeline over the next five years.

Going forward, Measat is embarking on a growth trajectory and is planning to launch one satellite every 18 months.

Measat now provides satellite connectivity to over 150 countries. The satellites cover 80% of the global population across the Asia Pacific, Europe, Africa, Middle East and Australia.