Analysis: Investors brace for a great fall in China 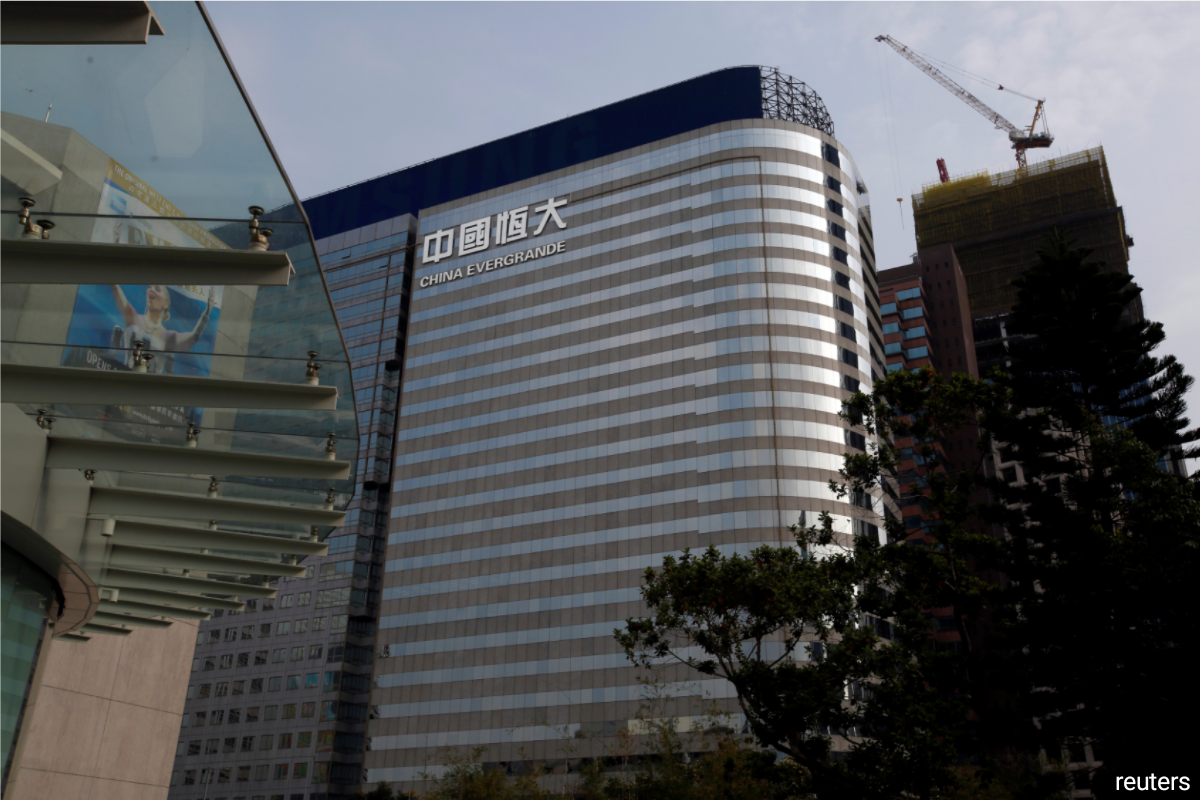 Evergrande warned just over two weeks ago that it risked defaulting on its debt if it failed to raise cash. Since then it has said that no progress has been made with those efforts.

LONDON (Sept 17): International investors that have been piling into China in recent years are now bracing for one of its great falls as the troubles of over-indebted property giant China Evergrande come to a head.

The developer's woes have been snowballing since May. Dwindling resources set against 2 trillion yuan ($305 billion) of liabilities have wiped nearly 80% off its stock and bond prices and an $80 million bond coupon payment now looms next week.

What happens then is unclear. Bankers have said it will most likely miss the payment and go into a kind of suspended animation where authorities step in and sell some of its assets, but it could easily get messy.

"We will have to see what happens," said Sid Dahiya, head of EM corporate bonds at abrdn, formerly Aberdeen Standard, in London, which holds a small sliver of the bonds.

"They are probably working on a deal in the background, but we don't have any clarity and we don't really have any precedents, so it is uncharted water."

Evergrande warned just over two weeks ago that it risked defaulting on its debt if it failed to raise cash. Since then it has said that no progress has been made with those efforts.

Analysts say the bigger picture is that if Evergrande - which has more than 1,300 real estate projects in over 280 cities - does topple, it will firmly dispel the idea that some Chinese firms are too big to fail.

It would probably still apply to big state-linked firms of course, but it comes too after Beijing's clampdowns on big tech firms like Alibaba and Tencent wiped nearly a trillion dollars off its markets earlier in year.

Contagion from Evergrande has largely been confined to China's other highly-indebted "high-yield" firms which have also slumped, but Hong Kong's heavyweight Hang Seng also hit a 10-month low on Thursday showing there is some spread.

There are big name global funds involved too. EMAXX data shows that Amundi, Europe's largest asset manager, was the largest overall holder of Evergrande's international bonds although it is likely to have sold at least some before things turned really ugly.

The Paris-headquartered firm had just under $93 million of a $625 million bond due for repayment in June 2025 the EMAXX data shows. UBS Asset Management was the number two holder in that issue with $85 million as well as one of the bigger overall holders.

Amundi's Co-Head of EM Corporate & EM High Yield, Colm d’Rosario described the fundamental picture for many Chinese firms as intact "For now, however, we await the commencement of a restructuring process (of Evergrande) to gather more information."

"It remains to be seen the scale of loss that investors will face." 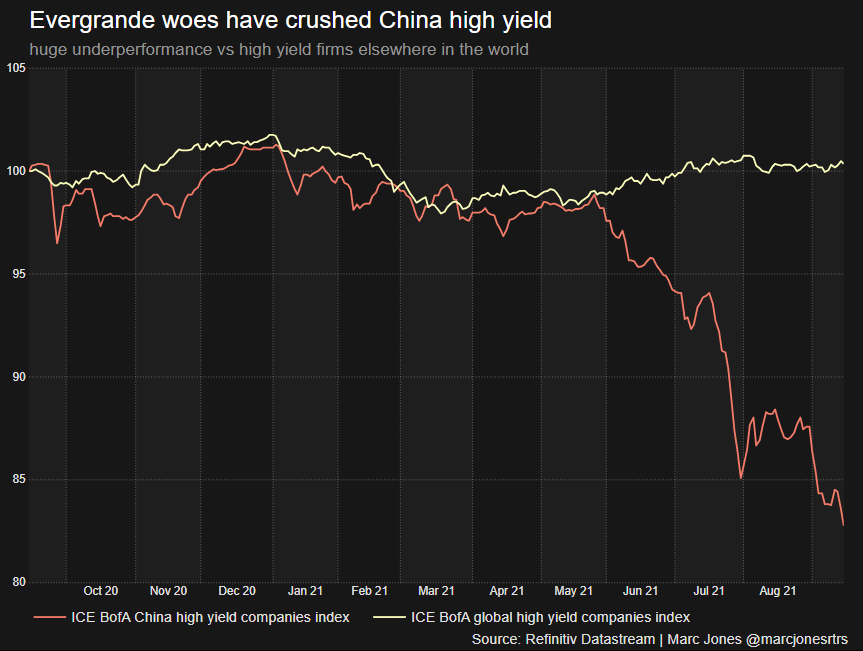 Back in April Evergrande's bonds were trading around 90 cents on the dollar, now they are closer to 25 cents.

"It was always priced as a risky high-yield investment but what prices are telling you today is that there was some surprise that the government would let it go fully," said the head of emerging market debt at U.S. fund Aegon Asset Management Jeff Grills.

He added it has been a text book example where investors had been lured in by the 10% plus interest rate the bonds had provided.

According to the letter Evergrande sent to the Chinese government late last year, its liabilities involve more than 128 banks and over 120 other types of institutions.

A group of Evergrande bondholders has selected investment bank Moelis & Co and law firm Kirkland & Ellis as advisers on a potential restructuring of a tranche of bonds, two sources close to the matter said.

Other funds also exposed to the bonds include the world's biggest asset manager BlackRock, as well dozens more such as Fidelity, Goldman Sachs asset management and PIMCO.

Major U.S. financial firms including BlackRock and Goldman, and the likes of Blackstone, are due to meet with officials from China's central bank and its banking and securities regulators later on Thursday. 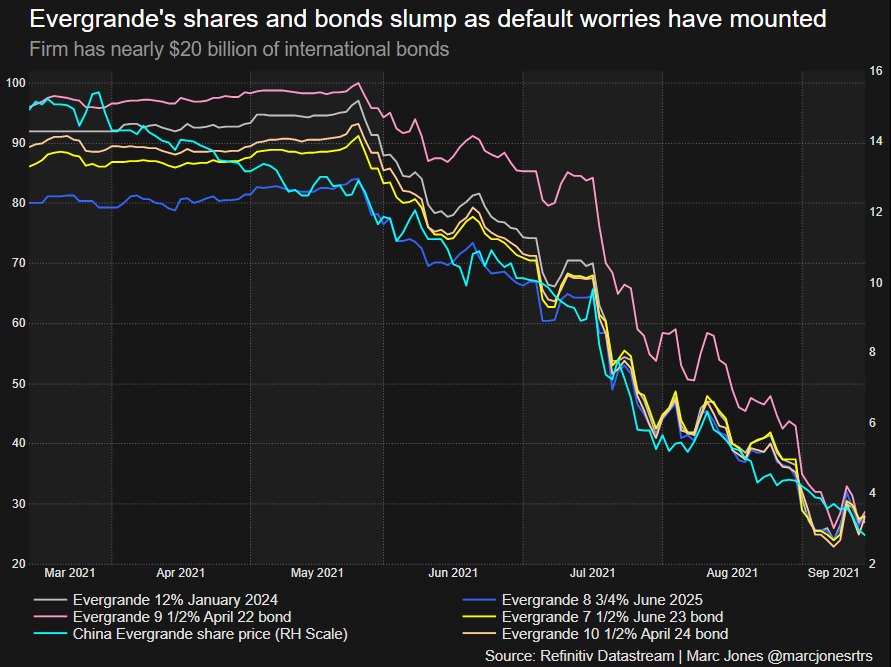 Debt analysts hope though the damage might not be too widespread. The holdings are tiny compared to those big investment firms' overall size. Also only $6.75 billion of near $20 billion of Evergrande debt are included on JPMorgan's CEMBI index which big emerging market corporate debt buyers use as a kind of shopping list.

Others are still wary though of the wider signal it sends.

"This is part of a self-reinforcing dynamic in which rising insolvency risk sets off financial distress costs, which in turn increase insolvency risk," Michael Pettis, a nonresident senior fellow at the Carnegie–Tsinghua Center for Global Policy, said on twitter.

"Until regulators step in and credibly address insolvency risk across the board, conditions are likely only to deteriorate."