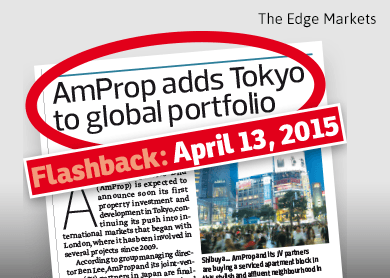 The announcement confirmed The Edge weekly report on April 13, 2015, which quoted its group managing director Ben Lee as saying that the company was due to announce soon its first property investment and development in Tokyo.

Totalling about 1,963 sq m or 40% of net rentable area (NRA), the apartments are currently leased to Asahi Homes and are operated as service apartments.

In a statement yesterday, AmProp (valuation: 2.1; fundamental 2.4) said the company, via its co-investment with Grosvenor Asia Pacific Ltd and Nan Fung International Holdings Ltd of Hong Kong, has signed an agreement for the proposed acquisition.

“The property is part of a proposed redevelopment scheme arranged by Japan’s Nomura Real Estate Development. Post city planning approval from the Tokyo government, the proposed redevelopment scheme aims to transform the subject building and surrounding areas within its vicinity into a mixed-use development comprising retail, office and residential units with parking bays with a gross floor area of about 95,000 sq m and a NRA of about 60,000 sq m,” said AmProp.

The redevelopment site is located adjacent to the prominent Roppongi Hills development, one of Japan’s largest integrated developments housing the offices of local and international corporates such as Goldman Sachs, Lenovo, BASF as well as the Grand Hyatt Hotel.

The Edge had reported that AmProp and its joint-venture partners were acquiring a serviced apartment block, which will be refurbished into a prime residential complex. AmProp had estimated the project’s gross development value at US$89 million (RM323 million).