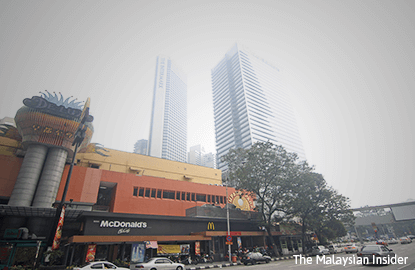 Mass Rapid Transit Corp Sdn Bhd (MRT Corp) strategic communications and public relations director Datuk Najmuddin Abdullah said the land upon which the shopping centre stands is in the process of being acquired by the government under the Land Acquisition Act 1960 for the purpose of constructing the MRT Sungai Buloh-Serdang-Putrajaya Line (SSP Line).

“Specifically, the land is required for construction of the underground Ampang Park [MRT] Station, which has to be in that location for it to be physically integrated with the existing Ampang Park Light Rail Transit (LRT) Station.

“The physical integration is extremely important as it will allow users to easily and seamlessly transfer between the Kelana Jaya LRT Line and the SSP Line. Construction of the underground station will require structures on the surface to be demolished,” he said.

Najmuddin said the Federal Territory Land and Mines Department would be serving Borang E to the land owner to notify him that the land is being acquired for the SSP Line project.

“This will be done in the next few weeks. The whole land acquisition process is handled by the Federal Territory Land and Mines Department,” he said.

“MRT Corp is not privy to such information as the number of tenants in the mall. That will be determined as part of the land acquisition process,” he said.

Najmuddin said MRT Corp, as the owner and developer of the SSP Line project, would be meeting the land owner and all other parties affected by the acquisition.

“This is the standard practice since the start of the development of the MRT Sungai Buloh-Kajang Line. Arrangements are being made for the meeting to take place,” he said.

Najmuddin said the land acquisition process also entails hearings to determine the sum of compensation for the affected parties.

“The quantum of compensation will be determined by the Valuation Department and will reflect market prices. The land owner will hand over vacant possession of the property to the government at the end of the process.

“MRT Corp hopes that the process will be completed by the middle of next year,” he said.

Najmuddin said the Land Acquisition Act 1960 compels the Federal Territory Land and Mines Department to gazette and notify the owner of the land.

“The gazette to the effect was published on July 30, and notices were issued after that.

“Furthermore, a reference book containing a list of land lots that are likely to be acquired for the SSP Line was also available to the public at the Land Public Transport Commission headquarters during the public inspection of the SSP Line from May 15 to Aug 17. The Ampang Park Shopping Centre land was included in the list,” he said.

According to the Ampang Park Shopping Centre website, the mall was the brainchild of the Low brothers, following their successful development of People’s Park, the first shopping centre in Singapore.

Built by Low Keng Huat Brothers Realty Sdn Bhd in March 1973, Ampang Park Shopping Centre was a pioneering city mall that paved the way for shopping centres to come in Malaysia, while changing the shopping habits of Malaysians. — The Malaysian Insider