Amhari: I had to listen to Azlin 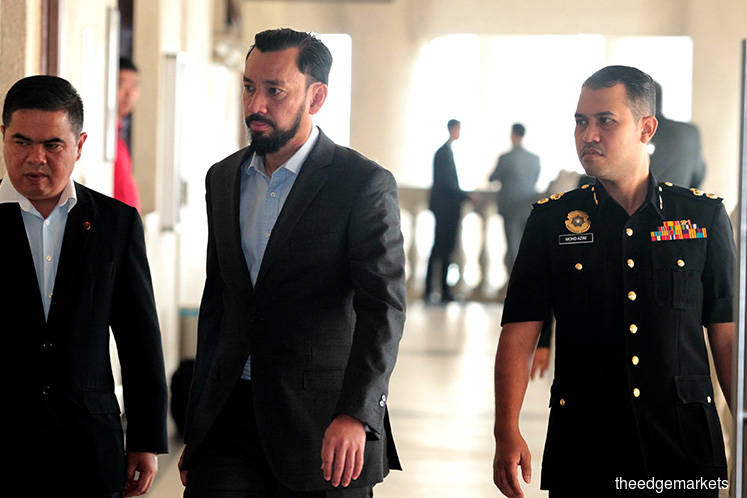 Amhari was further asked about the purpose of the US$800,000 deposit into the account. Photo by Suhaimi Yusuf

KUALA LUMPUR: Datuk Amhari Efendi Nazaruddin “solely depended” on the words of his late boss Datuk Azlin Alias, as well as Low Taek Jho to act on the fugitive financier’s instructions as the civil service hierarchy’s protocol had prevented him from speaking directly to the prime minister, the High Court was told yesterday.

Amhari did not confirm the veracity of several instructions from the financier who is more widely known as Jho Low — with then-prime minister Datuk Seri Najib Razak, because he followed the protocol in the civil service, which did not allow him to skip levels in the hierarchy.

The witness implied this, after defence lawyer Tan Sri Muhammad Shafee Abdullah questioned his inaction despite meeting Najib at least once a week.

“I can’t. I had to listen to Azlin. In the civil service, I have to follow the rules. I have to report to my direct superior. It would be embarrassing for me to do otherwise unless Azlin told me to check,” he told the senior lawyer during his cross-examination.

The senior lawyer then asked him: “You confirm you depended entirely on Jho Low and Azlin’s words?”

The witness replied in the affirmative

Azlin served as the chief private secretary to Najib until he passed away in 2015.

Meanwhile, Amhari was Najib’s special officer and was serving as a director in the Prime Minister’s Office.

The witness had testified earlier about secret late-night rendezvous between himself, Azlin and Jho Low at the Prince Hotel here, where the fugitive businessman would issue orders, including those regarding 1Malaysia Development Bhd (1MDB) matters, purportedly from Najib himself.

According to the witness, Azlin had checked with Najib about instructions that seemed extraordinary such as speeding up financial approvals and Jho Low’s shortlist of 1MDB board member candidates — and the former premier confirmed that he had given his approval.

Witness did not ask Najib about BSI accounts

However, the witness admitted that he had neither verified instructions from Jho Low to open a bank account with BSI in Singapore to store election funds, nor sought Bank Negara Malaysia’s (BNM) permission to do so.

He agreed with Muhammad Shafee that he did not seek BNM’s permission to open a foreign bank account.

“We (Azlin and I) went to Singapore together and followed the orders given by [Jho] Low. At that time, I was under Azlin and what he does, I follow,” he said.

He concurred with Muhammad Shafee’s description that it was as if “the mountain had come to Muhammad”, because Azlin and him were given special treatment, with the banker even coming to their hotel to open the account.

When pressed, Amhari admitted he did not ask Najib’s permission to open the bank account.

“It was not clear to me that I needed the blessings [from Najib] as he was the minister of finance, and he would be well-versed [in the procedures]. By he, I mean Datuk Seri Najib and also Azlin who were well aware of the necessity of what was needed to open the accounts,” he said.

He added that he believed that the ex-premier had given his blessings to Jho Low’s proposal to open the bank accounts.

In response to Muhammad Shafee’s claim that Najib was unaware of the BSI accounts, the witness said: “I do not know.”

The witness agreed that when the BSI bank account was opened, he was unsure whether it was a personal or company account.

However, Amhari agreed with Muhammad Shafee’s suggestion that a shell company named Aerosphere Ltd was placed under him as the owner of the company, as stated in bank documents.

Amhari was further asked about the purpose of the US$800,000 deposit into the account, and the witness maintained that it was in anticipation of the 13th general election in May 2013.

When Muhammad Shafee tried to put across that US$800,000 was mere “peanuts” for election purposes, Amhari disagreed with this.

The lawyer also suggested that Jho Low’s request to open a foreign bank account with that amount was possibly “rubbish”, considering that Najib had a few hundred million US dollars deposited into his AmBank account back home for political purposes.

However, the witness refuted the lawyer’s suggestion, saying he was unaware of how political funding was done and he was merely following orders.

The witness further added that he was not suspicious of Jho Low’s orders as the businessman was close to Najib.

The witness said he opened the account at Kasikorn Bank in Bangkok while being accompanied by a Thai man whose name he has forgotten.

He added that he tried to transfer the amount from BSI Bank to Kasikorn Bank but was not allowed to do so.

Amhari said a female BSI official informed him that the account had been blocked temporarily.

Najib is charged with 25 counts of money laundering and abuse of power involving billions of ringgit allegedly siphoned from 1MDB.

The trial resumes on Tuesday morning.