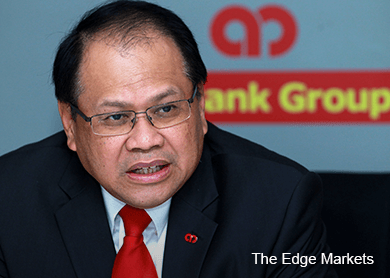 "The search for the group MD is not done by me, but by the board members which is progressing," acting group MD Datuk Mohamed Azmi Mahmood told a media briefing to announce the group's financial results for the year ended March 31, 2015 (FY15) here today.

Asked if the candidate could be a foreigner seeing that the Australia and New Zealand Banking Group Ltd (ANZ) is the largest shareholder of AmBank Group with 23.7% stake, Mohamed Azmi said he does not know.

"To be fair, it is up to the committee and we will leave it to them (to decide)," he said.

Mohamed Azmi assured that it was "business as usual" at AmBank Group and that it has sound asset quality and capital position.

Mohamed Azmi was appointed to his current post after Ashok's contract as MD ended on April 1, 2015.

AmBank Group chief financial officer (CFO) Mandy Simpson said the board has engaged an international external recruitment agency and that it was working through the agency to find a suitable candidate for the position.

Mandy also said AmBank Group is expecting loan growth to be between 4% and 5% for FY16. For FY15, it saw loans contracted by 1.6% due to the the decline in its auto-financing loans that was down by almost 11%.

Although auto-financing is expected to be broadly flat for FY16, she is optimistic that the loan growth can come from wholesale segment through the small-medium enterprise sector as well as commercial business including growth in mortgages.