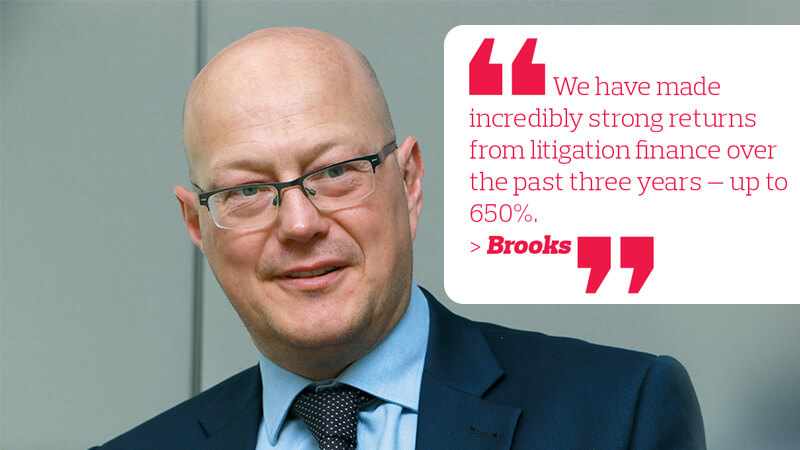 According to Brooks, some recently released data suggests that inflation in the US will be slightly higher than forecast. “As a result, the US Federal Reserve may raise rates more than expected. If this happens, it will not only be bad for the bond markets but also the equity markets,” he says.

With greater volatility expected this year, it will be hard for investors to find good returns and opportunities in traditional asset classes. European government bonds are yielding close to 0% and US Treasury bonds are only giving yields of 2% to 3%, all while equity valuations are looking expensive, Brooks points out.

“In our view, if inflation does not come to the fore and there is decent economic growth this year, then equities will probably do well. But various factors could lead to some sharp declines in the markets and history tells us that stock markets do crash as soon as people get overconfident,” he says.

One approach that Aberdeen adopts in such environments is to reduce its weighting in equities and find investments that can ride out the turbulence, even if it means accepting the fact that it may miss out on the last leg of the rally.

The fund house does not hold any government or investment-grade bonds, given the current stretched equity markets. Just under 20% of its portfolio is in equities while 80% is in diverse, less conventional investments. This includes better-known alternative assets such as emerging market bonds and infrastructure as well as lesser-known ones such as litigation finance, ABS and ILS.

Aberdeen is investing in the bonds of 15 emerging economies that are providing attractive yields of about 7% per annum. “This includes local currency bonds in a number of emerging markets. We see opportunities in India, Brazil, Indonesia and Mexico,” says Brooks.

Meanwhile, infrastructure — which provides reliable inflation-linked returns and predictable performance — is a suitable component of a diversified portfolio. The asset class, which is providing a return of about 7% per annum, is especially good for portfolios in volatile and uncertain times, says Brooks.

Infrastructure investments can be made in many sectors, including renewable energy (such as wind and solar power farms) and social infrastructure projects (such as schools and police stations). Brooks says these works are vital for society and they provide stable long-term yields with potential for capital growth.

“The good thing about this asset class is that both renewable energy and social infrastructure projects can provide 20 to 25 years of cash flow. With a return of about 7% per annum, it is attractive in today’s environment where the expected return on equity in US dollar terms is probably about 5% per annum over the next five years,” he adds.

ILS is also an attractive alternative asset class. It could potentially provide investors with returns of 10% to 17% per annum, says Brooks. This asset class, which has been adopted by insurers and reinsurers to pass on unwanted risk to the capital markets, allows investors to effectively underwrite the same risks that insurers and reinsurers face, collecting premiums and paying losses as and when they materialise.

“It is quite an unusual asset class where you earn a return from taking on the risk of insurance losses due to extreme natural catastrophes such as hurricanes and earthquakes. Even the biggest reinsurers in the world do not have the capital to cope with such claims, so investors could put up capital to protect against those events and get good returns, says Brooks.

“We expect a return of about 10% per annum. But if there are no catastrophic events, investors could get a return of 17%. However, it is best to diversify this investment, spreading the exposure to risks such as the California earthquakes, Florida hurricanes, European windstorms, Japanese typhoons and Australian floods. This is only a small part of our portfolio, but it is another way for us to earn good returns from different types of risks.”

Apart from buying into funds in the catastrophe bond market, investors could invest in ILS through specialist managers who write reinsurance contracts directly with insurers and reinsurers.

Another area of the credit market that Brooks finds attractive is asset-backed securities (ABS), which are pools of loans packaged as securities. The types of loans that are typically securitised include home mortgages, credit card receivables and student and home equity loans. Over the past decade, ABS have made up between 2.5% and 7% of the Barclays US Aggregate Bond Index.

Mortgage-backed securities (MBS) are the most popular type of ABS, although their reputation was tarnished by the US subprime crisis. Prior to the crisis, there was steady demand for these assets as investors were encouraged by the traditional strength of the housing market and the securities’ attractive ratings. When the quality of MBS declined and borrowers started to default, the housing market tightened and began to collapse, hurting even conventional mortgage holders.

“Due to this, the reputation of the whole asset class was affected and most investors do not want to go into this. However, this means that those who want to invest in ABS can get higher risk-adjusted returns if they do their research properly. Alternatively, they could invest in a fund that has exposure to these securities,” says Brooks.

Aberdeen also has exposure to a relatively new segment called litigation finance, which provides funding for lawsuits in return for a portion of the expected settlement. “For example, if a large company steals a small company’s idea, causing the latter to sue the former, the large company could drag the case on for as long as possible until the small company runs out of money and is forced to settle for a small sum. Now, the small company can go to a litigation finance provider such as the one we invested in and offer a share of the proceeds,” says Brooks.

This asset class is slowly gaining prominence, according to a study by ALM Media last year. It found that 36% of US law firms used litigation finance in 2017 compared with just 7% in 2013.

“We have made incredibly strong returns from litigation finance over the past three years — up to 650%. We would not expect to make another 650%, but we could still make double-digit returns from our investment over the next few years,” says Brooks.

He adds that it is always a good idea for investors to explore their options when it comes to diversifying their portfolio, but it is even more important in today’s landscape where the outlook for traditional investments is not so positive. “There are a lot of ways to make money nowadays. Although some areas are very small, alongside other traditional and alternative investments, they could be built up to become a nice, diversified portfolio.”