The geometrical theme seen in the exterior design was inspired by the original pitched roof of the house, giving the structure a different profile at each turn of the corner 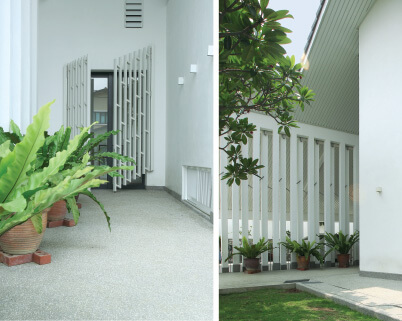 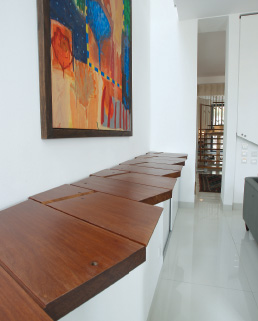 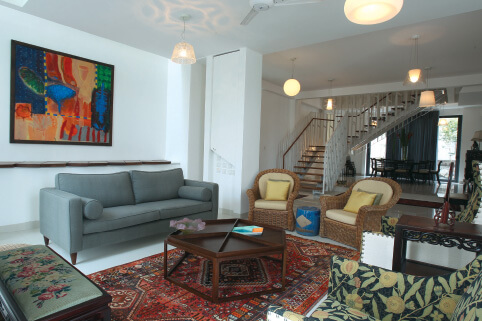 The furniture and rugs in the living room provide splashes of colour to the fully white background. As it is with the different styles of sofas and chairs, the lights that hang above the living area are a medley of shapes and sizes.

Just off the main living area is an additional room for family members to gather, a social hot spot especially during festive seasons. Wooden furniture add a sense of warmth to the space while ample natural light flood through floor-to-ceiling windows that provide a clear view of the lawn outside.

The dogleg staircase separates the living and dining areas in an otherwise open layout. A dark coloured eight-seater dining table and dark grey curtains stand out against the plain walls.

Melbourne-based architect Ian Aw (left) designed the home for his parents, choosing white as the overall theme for the house with recurring geometrical references. Built-in flush cabinets in the kitchen and dining area are mostly white and blend in with the walls. 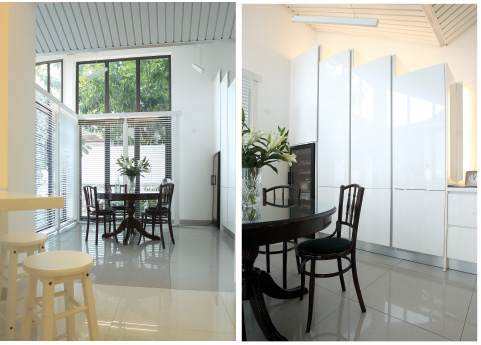 Unlike the tiled ground floor, the second storey warms up the stark palette of white with wooden flooring. One of the rooms has been converted into a loft, allowing for additional storage or living space, depending on the occupant’s preference. Next to it is a cosy study with bookshelves built at an angle in reference to the slanted roof.

A Family Home Is Rejuvenated With A Modern Aesthetic

James and Helen Aw’s family home — the very bungalow that welcomed the couple back from their honeymoon some four decades ago — sits in the quaint suburban neighbourhood of SS3. The couple almost moved into an apartment a few years back but decided there were too many memories to let go of. Instead, they opted to remodel their home.

Their architect son, Ian, was the obvious choice for the task. “For the first time, my clients were also my parents,” he laughs.

Ian came home from his Melbourne-based architectural practice to design and oversee the renovation. Having grown up in the house, the project was also a personal one for him and knowing his clients so well certainly was an advantage.

“My dad has green fingers and enjoys gardening. For my mom, it is the fact that we have lived here for so many years — familiarity with the neighbourhood, with the makan places and friends close by,” he says.

A huge garden flanks the house with ample space around the property to potter around. At the entrance of the home, glass display cabinets on wooden stilts proudly showcase paraphernalia from Helen’s travels.

While it was the maintenance and security-related concerns that led the Aws to contemplate moving out, Ian tells us that the decision eventually boiled down to determining “whether the memory of the house being a family home was important enough to stay”. Three years on, James and Helen are evidently happy clients.

The colour scheme of the home is predominantly white, giving the already large structure added presence. Overall, there is a recurring geometrical theme, inspired by the pitched roof that was retained from the home’s original structure. The roof slants at a relatively steep 25° to ensure efficient insulation. Ian says it was the one thing he was adamant about maintaining. “The roof was the major decision at the concept stage. We maintained the central structure of the house. That is the spirit of the house, conceptualised in the overall design with a series of floating roofs,” he explains.

The play of geometrical shapes can be seen in the cabinetry in the kitchen that is staggered in ascending height. The grilles on the front door slant in parallel to the roof too. Similarly, the bookshelf in the study room imitates the angled slant of the roof that is visible through the glass window behind it.

As we sit down at a round table in the kitchen for a chat, James tells us that this is his favourite spot and it is easy to see why: the morning sun floods the space through the open blinds. Also, instead of direct lights, which can be harsh, the house is bathed in soft, warm lighting.

The white theme of the exterior follows through into the interior of the house with the dark brown furniture in the dining area providing a stark contrast and focal point. Even the cabinets are mostly white and blend with the walls. Concealed doors that seem to disappear into the walls when slid open add to the clean-cut functionality of the house’s design.

A dogleg staircase in the centre of the structure ascends to the second level, separating the living and dining areas. “A major consideration was tempering the environment. I tried to connect all the spaces so there are no doors between them unless absolutely needed,” says Ian, who also advocated the interesting notion of “switching” on a window instead of the air-conditioning or a light when necessary.

Form meets function in various facets of the house, like the shoe rack that masquerades as an umbrella stand, complete with a tray to catch dripping water on a rainy day. The handles on the wardrobe doors are affixed at an unusual 45°, enabling dresses and coats to be hung at full length. One of Ian’s favourite creations is the shelving unit in the bathroom of the master bedroom, which epitomises the proverbial push and pull in a marriage. The metaphor is made possible by four skateboard wheels that support the sliding toiletry shelf located directly above the washbasins.

As one walks around the roomy bungalow, it is clear that it does indeed house cherished memories. Furniture, though kept to a minimum, is a blend of old and new, some even passed down from generation to generation. “My mother had brought with her this chest and the bed we have in one of the rooms upstairs when she came to Malaysia from China,” Helen says, pointing to a beautifully carved chest in the living room. These items provide the occasional pop of colour to the white walls, in addition to the paintings on the walls and rugs in the living area. In some instances, the vintage items are married with new ones, creating practical items like an oriental-looking side table fitted with a lazy susan and now used as a vanity table in the master bedroom.

Another such creation is a linear display shelf in the living room. It is not immediately apparent that the shelf is in fact the result of upcycling 20 original cengal staircase treads, each sawn at a 45° angle before being reassembled. Despite its new lease of life, the original form of the stairs was maintained as much as possible, including the pre-existing holes where the dowels were once fastened.

All in all, the items that fill the house tell the story of the lives of its owners. There is a large mirror in one of the rooms that James coyly shows us as he tells us about his art and craft project — bright red tiles glued together to form the frame. Helen’s collection of ceramic and wooden ducks that can be found in almost every section of the house, like the souvenirs from her travels, represents the things that are near and dear to the owners in a beautiful house that they have always called home.