'All we have left is to hope and pray': Travelers stranded in airport by coronavirus 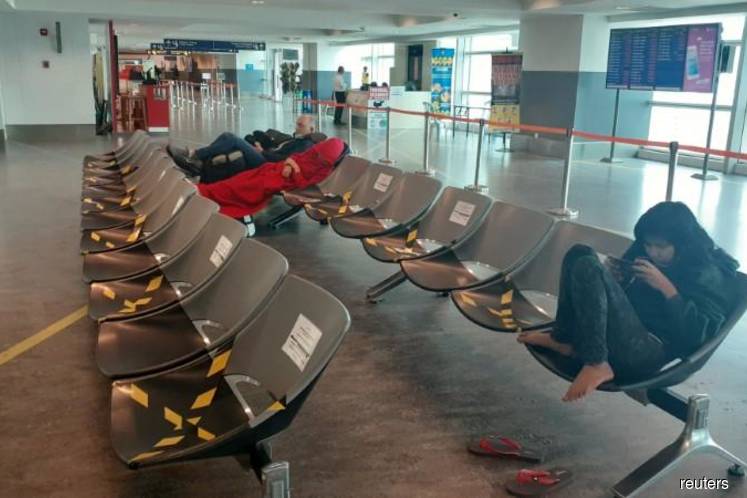 BANGKOK (March 26): Russian hostel manager Valerie Azure has spent the past three nights sleeping on the floor of a Malaysian airport along with her young son, after Southeast Asian nations sealed borders and canceled flights in the wake of the coronavirus pandemic.

Azure, 31, said more than a dozen people were stranded with her in the international airport in Kuala Lumpur, among hundreds marooned across the globe, according to media reports, as the virus plays havoc with travel plans.

After several weeks volunteering in a community centre for Afghan refugees in Malaysia, Azure said she and her nine-year-old son boarded an AirAsia flight for Thailand on Monday but were sent back after officials asked for blood tests proving they were free of the virus.

Malaysia has banned foreigners from entering since March 18.

"They said 'you're going to have to stay here'. We thought maybe they are not being serious, in the beginning," Azure told Reuters via WhatsApp.

Azure said people from Vietnam, Pakistan, and the Philippines were stranded alongside her. Airline staff bring them three meals a day of rice or noodles, and some water. They sleep on makeshift beds fashioned from cardboard and fabric.

Azure, who has lived in Thailand for the past seven years and runs a hostel on Koh Tao island, said she cannot afford to buy a US$3,000 ticket to Russia, where she has no friends or family.

They were planning to stay until the end of Malaysia's ban on foreign entries, on March 31, but it has since been extended until April 14. The Russian embassy told her they may be taken to an immigration detention centre, she said.

A Malaysian airport spokeswoman said AirAsia had informed them Azure was working with her embassy to find a solution.

"Please be rest assured that AirAsia is taking good care of their welfare and providing them sufficient meals during this difficult period," she said.

An AirAsia spokesperson said the safety and well being of guests and staff was its priority, but recommended any stranded travelers contact their embassies, as the matter was "outside the airline's control".

"AirAsia remains fully compliant with all travel bans and restrictions in place resulting from the Covid-19 outbreak. We continue to do everything possible to assist every guest affected by disruption during this unprecedented situation," the spokesperson said in an emailed statement.

Immigration department director-general Khairul Dzaimee Daud said in a text message they were looking into the case.

Azure said her son had been despondent since security officials confiscated his only toy, a ball.

"They said 'This is an airport and not a playground'. It was his only entertainment… Now he's just sitting there, I'm trying to keep him busy, to play games."

She worries about them falling sick in the airport.

"I don't know how safe it is… All we have left is just to hope and pray."