Airlines face ‘mission of the century’ in distributing vaccines 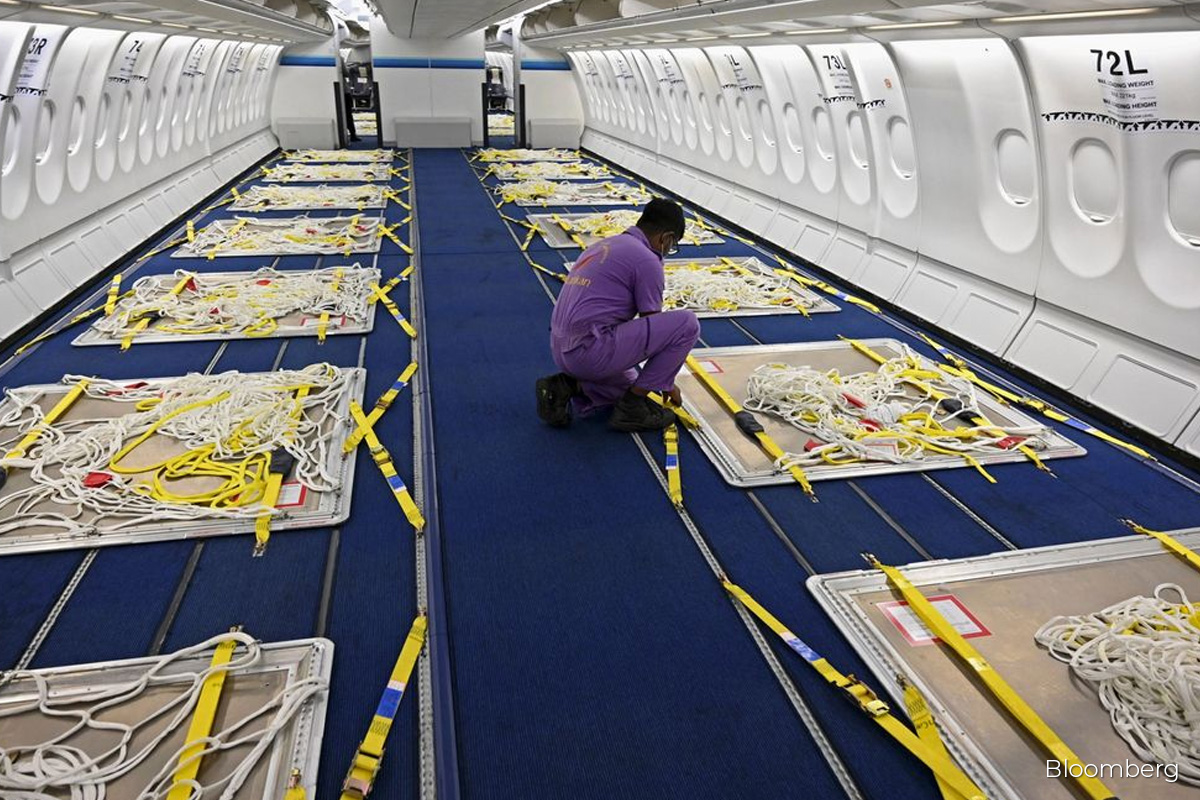 (Nov 30): In cooled warehouses on the fringes of Frankfurt airport, Deutsche Lufthansa AG is preparing its depleted fleet for the gargantuan task of airlifting millions of doses of the vaccines meant to end the global pandemic.

Lufthansa, one of the world’s biggest cargo carriers, began planning in April in anticipation of the shots that Pfizer Inc. to Moderna Inc. and AstraZeneca Plc are developing in record time. A 20-member task force is at work devising how to fit more of the crucial payload onto the airline’s 15 Boeing Co. 777 and MD-11 freighters, along with hold space in a vast passenger fleet now flying at just 25% of capacity.

“The question is how we scale it up,” said Thorsten Braun, who leads Lufthansa’s part in the global effort.

Laid low by a Covid-19 outbreak that’s decimated passenger demand, airlines will be the workhorses of the attempt to eradicate it, hauling billions of vials to every corner of the globe. It’s an unprecedented task, made more difficult by the carriers’ diminished state after culling jobs, routes and aircraft to survive a crisis that’s reduced air traffic globally by an estimated 61% this year.

“This will be the largest and most complex logistical exercise ever,” said Alexandre de Juniac, chief executive officer of the International Air Transport Association, the industry’s chief lobby. “The world is counting on us.”

Transporting vaccines to billions of people around the globe will be the "mission of the century" for air transport.
— IATA (@IATA) November 25, 2020

IATA estimates that the equivalent of 8,000 loads in a 110-ton capacity Boeing 747 freighter will be needed for the airlift, which will take two years to supply some 14 billion doses, or almost two for every man, woman and child on Earth. It’s a tall order, given about one-third of the global passenger fleet is still in storage, based on data from Cirium.

Katherine O’Brien, the World Health Organization’s head of immunization, likens the task of distributing the vaccines after the months-long development sprint to summiting Mount Everest having reached base camp.

“The climb to the peak is really about delivering the vaccines,” she said on Nov. 16.

Here are some of the biggest challenges along the way:
Cargo Capacity

There are around 2,000 dedicated freighters in use, carrying about half of all goods moved by air. The remainder typically goes in the bellies of the world’s 22,000 regular jetliners.

While the freighters are full, air-cargo volume has tumbled this year because so much belly capacity is sitting idle. Airlines have drafted about 2,500 passenger planes into cargo-only roles, but the job of distributing the vaccine would be easier if fleets were flying with usual frequencies to their usual destinations.

At the start at least, space will be limited. The massive undertaking is expected to begin at a peak time for cargo carriers, right as the online Christmas shopping frenzy, boosted this year by Covid-19, reaches its zenith.

Pfizer plans to ship 1.3 billion doses of its vaccine by the end of next year, with Moderna producing about 500 million. AstraZeneca has manufacturing capacity for 2 billion doses, half of those targeted to low- and middle-income nations.

“What we have to do is very quickly help the world get up on its feet,” said Dennis Lister, vice president for cargo at Emirates, the world’s largest long-distance airline. “Part of that is making sure we get vaccines on planes to people that need it, so we get people flying again.”

To allow more passenger jets to be brought back into service, governments should open up travel, says Glyn Hughes, IATA’s global head of cargo, striking a familiar industry refrain.

The Pfizer-BioNTech SE vaccine adds an extra layer of difficulty. It must be transported at minus 70 degrees Celsius, colder than winter in Antarctica, and the companies plan to use GPS-enabled thermal sensors to track the location and temperature of each vaccine shipment.

Upon arrival, the vaccine can be stored in ultra-low temperature freezers (which are commercially available and can extend the vaccine’s shelf life for up to six months), or in a fridge in a hospital for five days at 2-to-8 degrees Celsius, or in a special Pfizer thermal shipper, in which the doses will arrive. That can be used as a temporary storage unit by refilling with dry ice for up to 15 days. Once thawed, the vials cannot be re-frozen.

The choreography will be delicate, with controls in place from factory to clinic and all points between.

Virtually no aircraft are capable of keeping items so cold. Airlines will instead rely on Pfizer’s specialized containers to cool the medicine.

Delta Air Lines Inc., United Airlines Holdings Inc. and American Airlines Group Inc. are among the carriers that said they are prepared to handle shipments of the Pfizer drug. American has both temperature-controlled containers and pre-packaged shipments with cold packs or dry ice.

Delta recently approved use of DoKaSch GmbH’s Opticooler RAP climate-control containers. It also increased allowable levels of dry ice, which is regarded as a “dangerous good,” according to IATA, meaning only about 50% of hold space can normally be filled with vaccine shipments packed this way.

“While distribution needs continue to evolve, a team approach will ensure that there will be enough air cargo capacity to handle demand,” Vittal Shetty, director of innovation and delivery-airport excellence and cargo for Delta.

United on Friday started operating charter flights to get doses of Pfizer’s vaccine ready for quick distribution, according to a Wall Street Journal report that cited people familiar with the matter.

Despite the hurdles, a well-established global network for pharmaceutical distribution should expedite the flow of doses. Cities ranging from Miami, Dallas and London, to Liege in Belgium, Dubai, Mumbai, Singapore and Incheon in Seoul have well-established deep-freeze capabilities.

United Parcel Service Inc. has built facilities in Louisville, Kentucky, and in the Netherlands with a total of 600 deep freezers that can each hold 48,000 vials of vaccine at temperatures as low as minus 80 degrees Celsius.

FedEx Corp. has added freezers and refrigerated trucks to its already extensive cold-chain network, and Richard Smith, who’s heading up the delivery firm’s vaccine effort, has pledged to free as much air and ground capacity as needed.

Delivery firms have experience transporting flu vaccines and medical samples at low temperatures. And both UPS and FedEx mobilized earlier this year to fly tons of needed medical supplies into the U.S. when the shortage was acute. They’ve since been coordinating with vaccine makers and government officials to prepare for the vaccine rollout.

“We’re just waiting until they tell us they have a vaccine ready and we will be ready to go out there and deliver it to every ZIP code in the U.S.,” Smith said. “We’ll be ready to deliver it around the world as well.”

United Nations humanitarian relief agency Unicef has been recruiting airlines into its vast effort to distribute the vaccine to more than 170 countries.

While transporting vials from their point of manufacture to a major hospital or clinic in a big, developed city is one thing, the challenge gets steep in emerging nations, where infrastructure to remote villages and towns may be rickety and unreliable, or even non-existent.

Unicef held a call in November with about 40 carriers to make plans for the global airlift to 92 of the world’s poorest nations, for which it’s leading efforts to purchase and distribute Covid vaccines. With another 80 higher-income countries that have chosen it to procure inoculations they will buy, the agency’s effort will cover 70% of the world’s population.

PT Garuda Indonesia was certified last month to transport vaccines across a country that has Southeast Asia’s biggest outbreak with more than 520,000 confirmed cases. The nation also presents one of the toughest logistical challenges, with a population of some 273 million spread across the world’s largest archipelago.

Singapore, meanwhile, a close neighbor to some of Asia’s poorest nations, should be able to target a disproportionate share of the transit, according to Alex Hungate, chief executive officer of ground-handling giant SATS Ltd. The former Singapore Airlines unit is IATA CEIV Pharma certified in Singapore, Beijing and Bangalore and is in the process of receiving the designation in Jakarta and Kuala Lumpur, he said.

Delivery won’t be just about airlines. Cars, buses, trucks -- even motorcycles, bicycles and donkeys -- may be required to get the vaccine to rural areas. In some places, it may need to be carried in by foot.

“These frozen vaccines, which are highly unstable, the developers need to work on stabilizing,” Poonawalla said.

The possibility of tampering, production of counterfeit shots and even attempts to disrupt distribution are also a concern, according to IATA. Drug companies have responded by requesting end-to-end security escorts, according to Dominic Kennedy, managing director for cargo at Virgin Atlantic Airways Ltd.

De Juniac, the IATA chief, insists that the industry is ready. “We will not disappoint,” he said.