Airbnb is flourishing in Malaysia 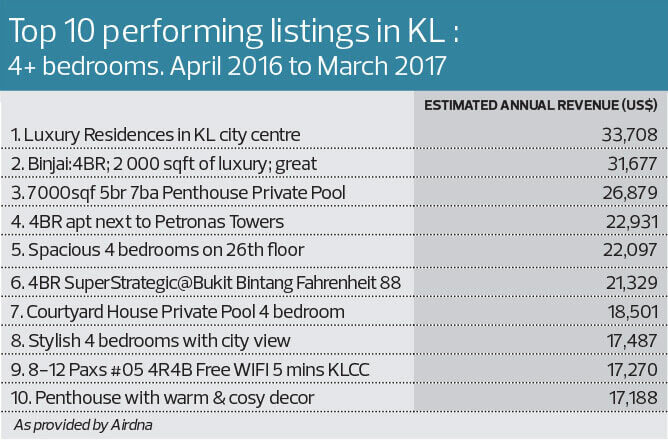 BUSINESSMAN Gary Wong has a 3-bedroom serviced apartment near the Petronas Twin Towers in Kuala Lumpur, which he has not been able to rent out for the past five months. His solution — placing the property on Airbnb for short-term stays.

Located directly behind The Intermark in Jalan Tun Razak, Wong’s MyHabitat apartment used to be rented out for RM6,000 a month. “I don’t know where all the tenants have gone,” he says, adding that potential renters are willing to pay only RM4,000 a month. “I plan to place my apartment on Airbnb,” he tells The Edge. Wong says he is keen to attend courses provided by Airbnb hosts in Malaysia to learn more about how it works.

It would not be surprising if many others are in the same situation as Wong, as Kuala Lumpur City Centre properties continue to see downward pressure on rents. Listing on Airbnb could provide an alternative income source.

Data from market analytics firm Airdna indicate that the average daily rate (ADR) for a 3-bedroom apartment close to KLCC was as high as US$182 (about RM790) from April 2016 to March this year. Airdna has also estimated that the annual revenue (April 2016 to May 2017) of a 3-bedroom listing in Jalan Alor or Jalan Changkat Bukit Bintang was US$25,598. This is a gauge of what people like Wong may be able to achieve.

Airdna is a data research company specialising in Airbnb data from all over the world. It compiles reports by scraping data from Airbnb’s website.

Figures from Airdna on the Malaysian market suggest a strong likelihood that Airbnb revenue will surpass that of 2016, while the highest earning host in Kuala Lumpur is “luxury residences in KL City Centre” with an estimated annual revenue of US$33,708 (see table).

In the first three months of this year alone,  Airbnb’s revenue — derived from the advertised rates and bookings made — reached US$17.59 million, which is 55% of the US$31.62 million achieved over 12 months last year.

Similarly, Airbnb’s revenue for Kuala Lumpur-based listings this year is expected to outperform 2016. Revenue from January to March was US$5.68 million, which is already more than half of the total annual revenue of US$9.47 million for 2016.

“...it looks as if 2017 is going to be a more successful year for Airbnb both in Kuala Lumpur and in Malaysia overall. In Kuala Lumpur, nearly 60% of the total revenue for 2016 has already been made in the first three months of 2017. And in Malaysia overall, over 55%. If Airbnb revenue continues at the same rate, then it is likely the total revenue for 2017 will be higher than 2016,” Airdna’s press officer Abigail Long tells The Edge via email.

The revenue data is a summation of all the bookings made as per the price indicated on the website for those booked days. It is not the total sum Airbnb guests paid, nor is it the amount Airbnb received. Airbnb guests have to pay an additional guest service fee (to Airbnb) of 6% to 12% at the website check-out while hosts pay 3% to Airbnb. Airbnb retains what is due to it before the money reaches the host.

Airbnb host Andrew Koo Boon Siew explains that if a listing advertises a unit for RM100 a night (not including discounts and before fees), the host will make RM97 a night after paying the service fee of 3%.

Long says revenue can be influenced by seasonality, as Airbnb pricing fluctuates significantly over the year.

No doubt, the number of listings has been on the rise but there have been no significant changes in ADR and occupancies.

“Interestingly, the ADR for entire home listings has stayed much in the same ballpark, and is currently less than it was when we started recording data in October 2014,” she says, adding that there was a peak in July 2016 (US$78.59) which is likely an indication of the tourist season. Last year, Hari Raya Aidilfitri celebrations were in July.

Average occupancy is calculated as a percentage of the number of room nights booked over the total number available each month.

As at March this year, the number of active listings in Malaysia was 20,042. In Kuala Lumpur alone there were 5,372 listings. Active listings, also called available listings, are those advertised for rent during a given month or had a booked day in the month.

“Other countries/cities see changes in the Airbnb landscape due to factors such as regulation and taxes, popularity of certain areas with tourists, technological development and even the political situation,” Long says, describing the factors that can influence Airbnb occupancy rates.