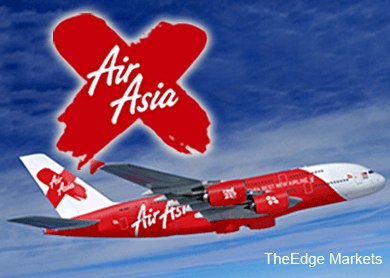 KUALA LUMPUR (May 25): AirAsia X Bhd, the bourse's most-actively traded stock, surged as much as 7% on institutional buying. This came ahead of its first quarter financials announcement this Wednesday (May 27).

Today, AirAsia X (fundamental: N/A; valuation: N/A)  rose as much as two sen to 29 sen before paring gains at afternoon market break. At 12:30pm, the stock settled at 28 sen with some 53 million shares traded.

The stock remained at 28 sen at 2.57pm. "There is a buying signal from institutional funds since last Friday," a dealer told theedgemarkets over the phone today.

He said instutional buyers had acquired AirAsia X shares as retail investors sold their units in the airline. "I believe the trend will continue for the next couple of days," he said.

In a recent note, Public Investment Bank Bhd said it believed AirAsia X's earnings for the first quarter ended March 31, 2015 (1QFY15) "will still be under pressure.".

"Pending more information from its earnings announcement next week, we believe its 1Q15 earnings will still be under pressure. Nevertheless, we remain positive on the long-term prospects of AAX
(AirAsia X), which will benefit from better capacity management and gradual improvement in yields," Public Investment said.