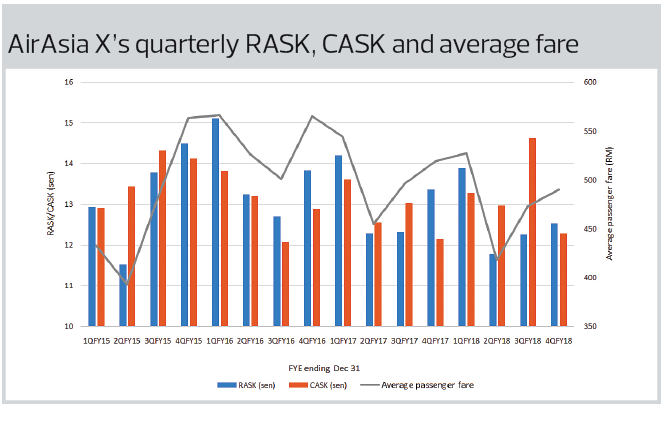 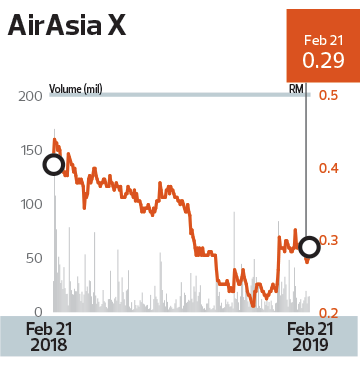 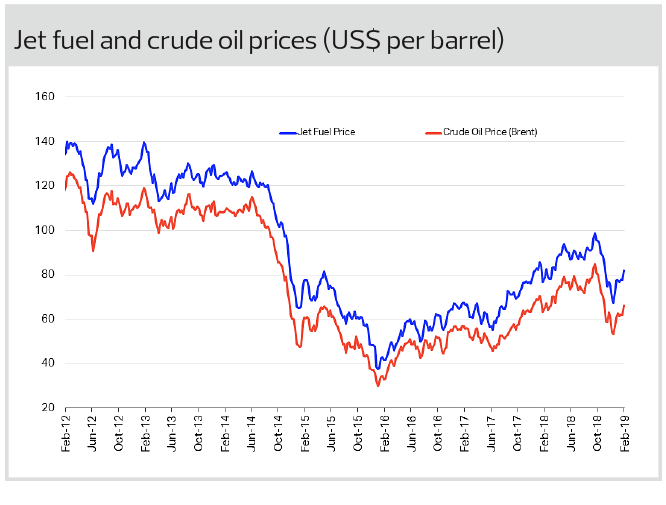 AFTER a year to forget in 2018, long-haul budget carrier AirAsia X is heading into what could be another difficult year. But how it performs in 2019 depends on whether its efforts to mitigate last year’s headwinds bear fruit.

But the operating profit was not enough as heavy loan repayment commitments dragged the airline into the red. In 4QFY2018 alone, it posted RM187.34 million in repayments, not including interest.

That means the airline continued burning through its dwindling cash reserves, which had shrunk further to RM252.6 million as at Dec 31, 2018 — its lowest in nearly three years.

Overall, it was AirAsia X’s third consecutive loss-making quarter and the fourth in the last six financial quarters running.

The numbers contrast with the recent optimism by AirAsia group co-founder Tan Sri Tony Fernandes, who last month declared that 2019 will be AirAsia X’s “best year ever”.

That declaration sparked a brief share price rally, with AirAsia X surging 30% over four trading days between Jan 2 and 7 to 30.5 sen.

Last Thursday, the stock ended at 29 sen, having lost 28.4% of its value over the last 12 months. Its market capitalisation was about RM1.2 billion.

“We have worked hard to get the right model and the right routes for AirAsia X. We are confident it can be as profitable as AirAsia [group eventually],” Fernandes, a substantial shareholder who does not hold any executive role in AirAsia X, told The Edge recently.

That said, analysts The Edge spoke to are not as optimistic, though some agree it would be a better year for the budget long-haul airline.

To be sure, the intensely competitive landscape looks poised to remain this year, according to an early February report by the CAPA — Centre for Aviation.

AirAsia X currently serves 29 destinations across Asia and is also the first Asean-based low-cost airline to get the green light to operate into the US.

Its fleet comprises 36 planes, including four newly delivered aircraft in end-2018 on lease.

With its diverse destinations, foreign exchange volatility also remains a double-edged sword for AirAsia X, whose borrowings are mainly in US dollars but not revenue.

In a report, CAPA noted that a number of airlines are on an aggressive expansion path despite overcapacity in a price-sensitive environment.

This could continue the aggressive price war seen in the first nine months of last year despite a jet fuel price increase, it added.

“The decline in fuel prices in 4Q2018 provided some relief but the aggressive competition in Southeast Asia is continuing, leading to some extraordinarily low fares for both short-haul and long-haul travel.

“Market conditions in Southeast Asia are challenging. A low cost base is king,” the aviation research outfit concluded.

AirAsia X was not spared the same headwinds last year and it is no surprise that it is reconfiguring its cost base to be more competitive this year.

Its first initiative was to stabilise the fuel cost. In a brief email reply, the airline confirms that it has hedged 52% of its fuel requirements for 2019 at US$63 per barrel.

The significantly higher hedging would reduce much volatility in the fuel cost for AirAsia X, with upside from any fuel price downward trend this year.

In addition, AirAsia X has also been optimising its routes to focus on profitable ones this year, analysts The Edge spoke to say.

How successful the fuel hedging and route optimisation will turn out to be remains to be seen.

For perspective, falling jet fuel prices in the fourth quarter dragged its cost per available seat kilometre (CASK) down to 12.27 sen, the lowest in four quarters. It is worth noting that 3QFY2018 CASK was at a multi-year high due to surging fuel prices.

In comparison, its revenue per available seat kilometre (RASK) had also been under competitive pressure in recent years as reflected in the falling average passenger fare on a quarterly basis.

While RASK exceeded CASK in 4QFY2018, that was only the third time in seven consecutive quarters. Meanwhile, its 4QFY2018 average passenger fare was RM490, the lowest fourth-quarter figure in at least three years.

Should fuel prices and foreign exchange volatility remain in its favour this year, AirAsia X still has to contend with its high borrowing cost. Its dwindling cash reserves have prompted questions on whether a cash call is looming.

To put its debt strain into perspective, its total borrowings come to RM687.05 million, of which RM192.32 million are short-term. In comparison, its available cash reserves as at Dec 31, 2018, totalled RM252.6 million.

Its saving grace could be its assets held for sale, listed as its current assets, worth RM999.01 million. The Edge understands that this represents the five aircraft AirAsia X is looking to sell in a sale-leaseback arrangement.

Sources say negotiations are underway and a transaction is expected to be concluded by the middle of the year at the latest.

In a Feb 12 note, Nomura Research said cash from the potential aircraft disposal would be used to pare down debt.

“Management is [also] negotiating for lower leases on some of its existing aircraft in exchange for attractive selling prices on its aircraft disposals to the lessor [and to be leased back by AirAsia X],” the research house said.

The outcome of the aircraft disposal will be closely watched by shareholders and investors, who would be keen to avoid a cash call.

If the debt strain is resolved, then AirAsia X will see clearer skies ahead as long as it keeps its costs low and pushes fares higher.